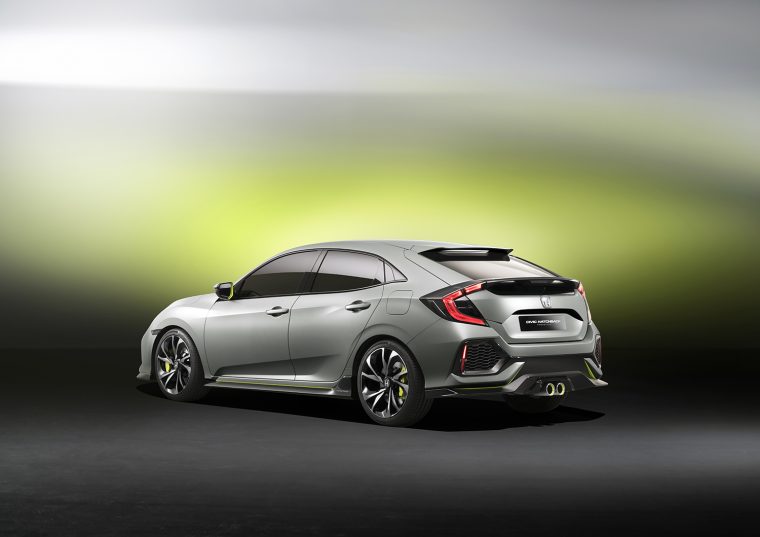 The new 2016 Honda Civic hatchback prototype had its official world premiere at the Geneva Motor Show, but of course not everyone was on-hand for the big reveal, because not all of us booked our plane tickets to Switzerland in time. Fortunately, ugly Americans such as myself will have the opportunity to see the new hatch in person when it makes its North American debut on March 22 at the 2016 New York International Auto Show.

The prototype previews the look of the upcoming 2017 Civic hatchback, which Honda says will go on sale later this year. When it does launch, the hatchback will be the third variant of the tenth-generation Civic to hit the market, following the sedan model that’s currently on sale and the coupe, which will hit dealerships later this month. All three are part of what Honda is calling “the sportiest most expansive Civic lineup ever,” and will be followed by the still-to-come Civic Si and hotly-anticipated Civic Type R.

The new Civic hatchback will be built at Honda’s European production facility, Honda of the UK Manufacturing (HUM), which helps explain why it made its first appearance in Geneva.

Once it enters production, the hatchback will be bigger than the current model—1.8 inches wider, 0.78 inches lower, and 5.11 inches longer, to be exact (I had to convert those figures from millimeters to inches from the European press release, so YOU’ RE WELCOME, AMERICA!).

Honda is also promoting the new hatch design as being significantly sportier than the outgoing model, thanks in large part to the bold LED taillights, large fan-blade wheels, and distinctive mesh openings in the rear.

“We knew that we needed to create a striking and stand-out exterior design that challenged conventional European compact styling while staying true to the original Civic’s core values,” designer Daisuke Tsutamori said at the Geneva debut. “The result is a marriage of distinctive and sporty design, rewarding driving dynamics and versatile practicality.”

The 2016 Honda Civic hatchback prototype will be on display to the public at the New York Auto Show from Friday, March 25th through Sunday, April 3rd.