Auto show season is fast approaching, which means we’re preparing ourselves for a myriad of new model reveals and concept unveilings. Next month, at the Detroit Auto Show, the 2016 Toyota Tacoma will greet the world for the first time. While we have heard plenty of rumors about this exciting makeover, yesterday was the first time the automaker itself officially confirmed the news. And Toyota did so by revealing a pretty exciting Tacoma teaser image. Here it is: 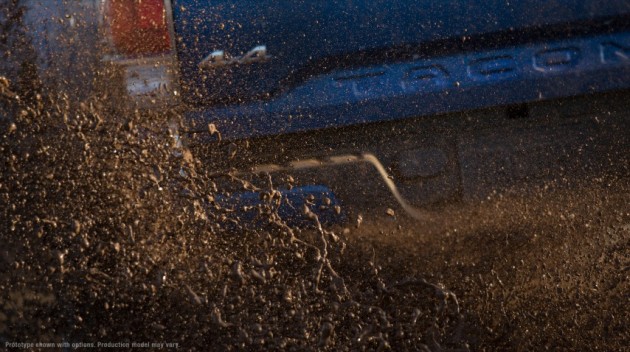 The world’s first look at the 2016 Toyota Tacoma

As you can see, what we have here appears to be the rear end of a Toyota Tacoma. From the water droplets, we can assume this particular Taco is driving through a large puddle; perhaps even a stream bed. This suggests that the 2016 Tacoma will offer all-wheel-drive (this assumption is backed up by the silver “4×4” letters above the bumper), and be rugged and well-equipped for off-road action. Other things we can deduce from this teaser image include the following:

We’ll have to wait until January 12th to learn more details about the 2016 Tacoma. On this date, we expect to find out important statistics, including the number of beverage holders (and whether or not they are big enough to house one, or numerous, Big Gulps), how many wheels it has (we’re guessing four, and perhaps a spare), and whether or not it has an engine (our prediction is that yes, it does).