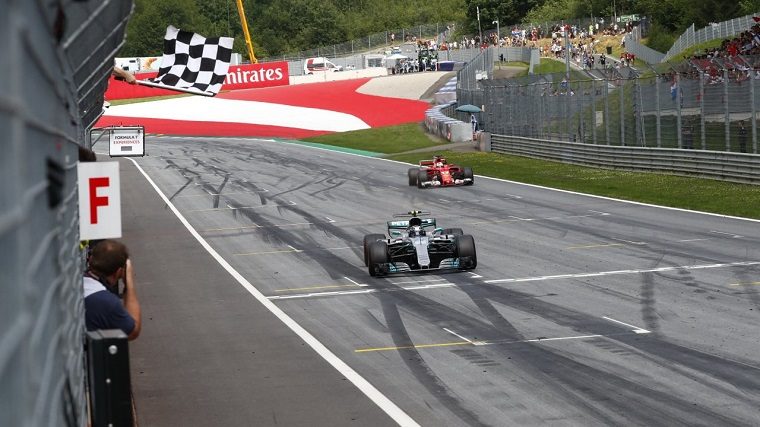 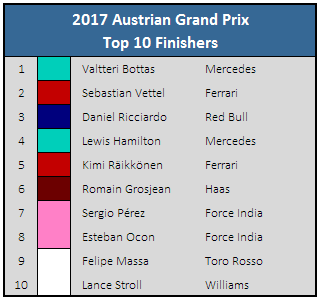 The 2017 Austrian Grand Prix at the Red Bull Ring was set to be an exciting Formula One race. Valtteri Bottas was on pole for only the second time this year, with Sebastian Vettel just behind him looking to extend his championship lead, both Red Bulls in 4th and 5th hoping to cause trouble, and Lewis Hamilton down in 8th after receiving a five-place grid penalty for changing his gearbox.

Unfortunately, that potential for excitement never quite came to fruition. Hamilton made quick work of the slower cars in front of him and was soon battling for fourth place with a Kimi Räikkönen who anyone knew, had they paid any attention to the sport in the last few years, wouldn’t really put up a serious fight.

Max Verstappen made yet another bid at earning the title of “unluckiest driver of the year” by crashing out of the first corner through no fault of his own (that’s now five retirements in seven race). Bottas raced off into the distance and Vettel seemed unable to keep up at first. That left Ricciardo in third place limbo for what seemed to be the thousandth time this year.

There was, however, one point of controversy: both Vettel and Ricciardo came on the radio after the start of the race to say they believed Bottas had made a jump start, and a first glance at the replays indeed seemed to show Bottas getting off the line at the exact moment the start lights went out.

It’s Hot Out There: Remember your routine summer car maintenance!

This alone should raise a question mark, as human reaction time would always lead to a delay between the two events. In many sports, a start that is “too quick,” even if it takes place after the gun has been fired—such as in athletics—is considered a jump start.

Apparently, not in Formula One. Bottas didn’t just demonstrate an inhuman reaction time: a frame-by-frame analysis of his start shows he really did begin moving forward before the lights went out. You’d imagine that would be case closed, but somehow Bottas’ start still remained within the tolerance of the sensors under the grid that detect car movement, and the stewards chose to take no action. Oh well: Vettel’s start was poor enough that even had Bottas taken a normal start, he likely would have stayed ahead anyway.

However, a penalty would have definitely swung the Grand Prix in the German driver’s favor. The end of the race provided a touch of excitement as Hamilton caught up to Ricciardo and Vettel caught up to Bottas. Ricciardo defended admirably to maintain third place, while Vettel wasn’t quite able to attempt a move, partly because he was blocked by the lapped car of Sergio Perez.

In any case, Vettel will have been happy to finish ahead of his championship rival, which he now leads by 20 points. Still, if Bottas keeps racking in the points, Vettel might have another driver to worry about than just Hamilton…

Credit Score: How do you improve it? 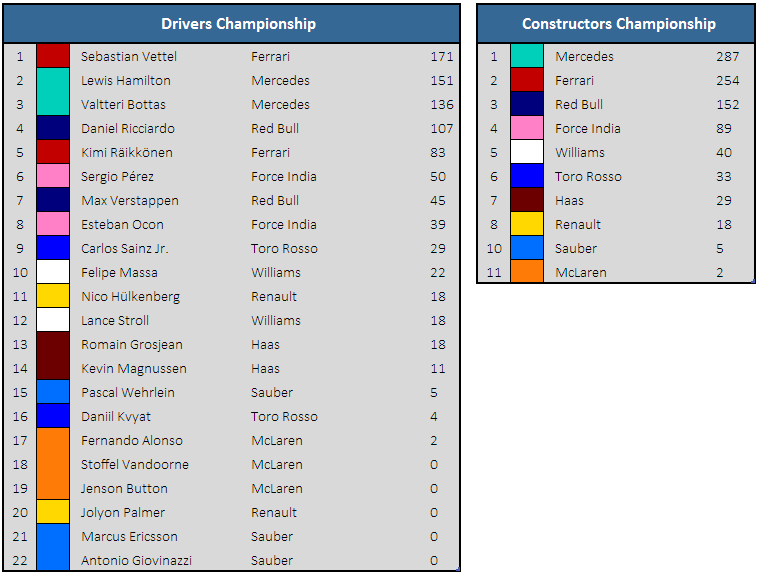