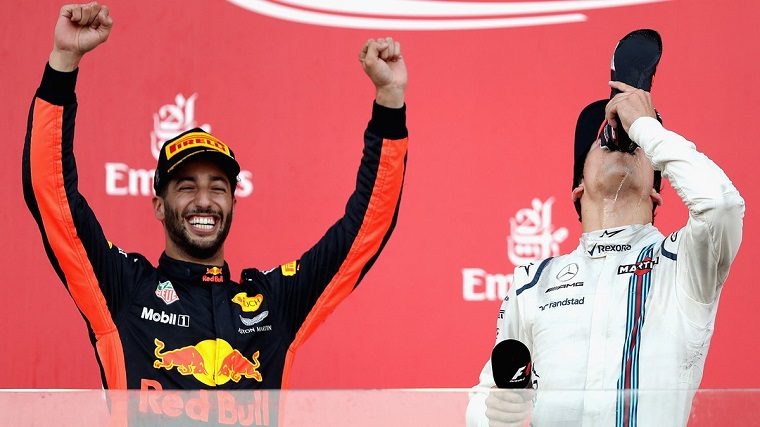 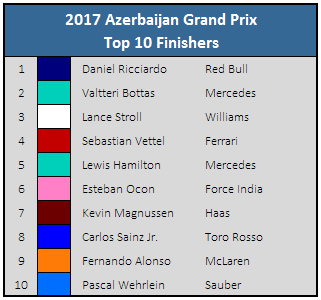 The 2017 Azerbaijan Grand Prix—last year called the European Grand Prix—was a huge step up from its debut in 2016. In fact, I may even go so far as to say it was the best race of the season. The twists and turns of the race were, unlike those of the track, as unpredictable and exciting as any we’ve had up until now.

Lewis Hamilton, starting on pole, got away cleanly at the start, but it was chaos behind him. Valtteri Bottas rode a curb too hard next to Kimi Räikkönen, causing him to collide into his fellow Finn, damaging both cars in the process and allowing Sebastian Vettel to slip up into second place. Bottas limped back to the pits with a flat tire and broken front wing.

Eventually Räikkönen retired from the Grand Prix, but despite falling more than a lap behind, Bottas received many opportunities to catch up. Before the halfway point of the race, the safety car made an appearance three times and the race was even red flagged as a result of additional crashes and the massive amount of debris littered around the circuit. By the time the race got properly going again, Bottas was just outside the top 10.

Brake Check: How to tell if you need new brakes

At the front it was very tense. The safety car restarts made Hamilton struggle to shake off Vettel, his championship rival; then something very unusual happened. While behind the safety car, Hamilton slowed down to a degree that took Vettel totally by surprise. The Ferrari nearly crashed into the back of the Mercedes, sending Vettel up in a fury. Complaining that Hamilton had brake-checked him, he quickly pulled up alongside Hamilton to make his feelings known via various angry hand gestures that would have had you believe he was Italian rather than German; but he never straightened his steering wheel and turned right into the race leader.

Fortunately for both drivers, they only touched wheels and at very low speed, which meant no damage was done. But whether Vettel had made the move accidentally or intentionally remains a point of controversy, and has not been helped by his confusing refusal, after the checkered flag, to discuss that it even happened.

It also proved decisive in the race. Vettel was handed a 10-second stop-and-go penalty for the move. The whole process of going to the pits and stopping in the pit box for 10 seconds before going again takes around half a minute and should have destroyed Vettel’s race and championship lead, but the Azerbaijan Grand Prix wasn’t done throwing curve balls.

A loose headrest forced Hamilton to make an unscheduled pit stop just before Vettel served his penalty—and when the latter did, he came out of the pits just a few car’s lengths ahead of his rival. Somehow, after all that, they were still battling for the same piece of track.

Used vs Certified: What’s the difference?

Thus, after all the crashes and restarts and drama, it was a race that unusually featured no Mercedes or Ferrari at the front, and thus a race anyone could have won—and some feel the sting of not having capitalized on that opportunity more than others, particularly Force India. Too eager to get by his teammate, Esteban Ocon crashed into Sergio Perez when both were running in the top five. Ocon has had a great season so far, but his bosses won’t have been happy about that.

It was Daniel Ricciardo who ultimately finished on top, an incredible turn of events considering he had been 17th after pitting on the fifth lap to remove debris from his brakes. Once the final safety car period ended, he made a brilliant overtaking move on both Williams in front of him to take third place, and once Vettel and Hamilton dropped back, the win was his for the taking.

You couldn’t have predicted the other two drivers to join him on the podium either. Lance Stroll, who had been severely underperforming all season until scoring points for the first time at the Canadian Grand Prix, had somehow calmly and steadily navigated his way through the street circuit and the chaos to become Formula One’s youngest rookie podium finisher. He could have finished second, but a late-charging Bottas beat him to the finish line by a mere tenth of a second. Yes, the same Bottas who had previously been more than a lap behind.

And that was only perhaps half of everything that happened of note during the Grand Prix. Hulkenberg made a rare mistake and crashed out. Palmer’s car broke down once again, as did Verstappen’s. Alonso scored McLaren’s first points of the season. Sainz spun and nearly crashed trying to avoid his teammate. What a race! 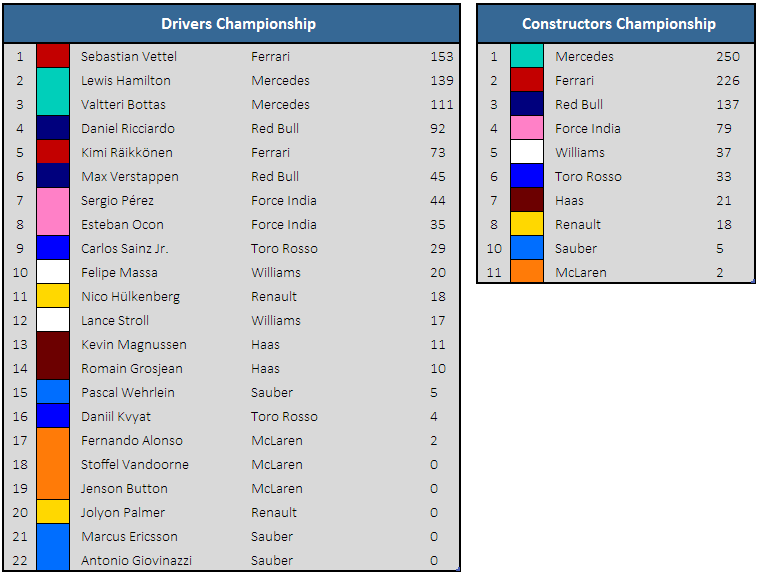