Hamilton Wins in Canada but Vettel Takes the Spotlight 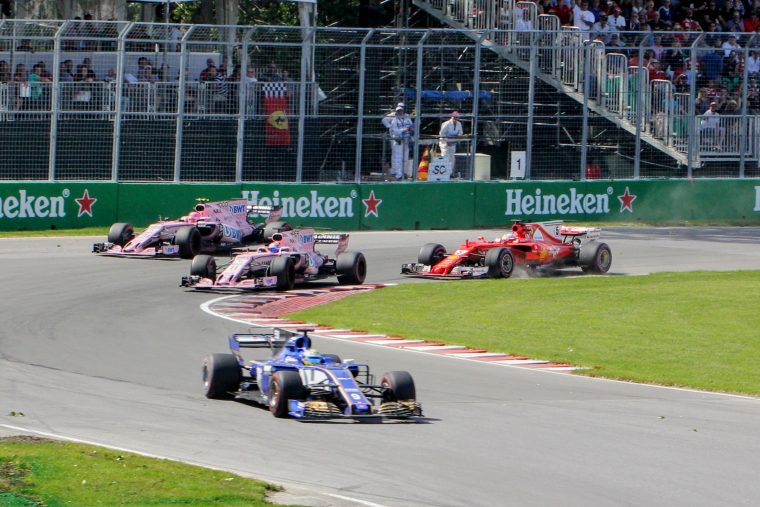 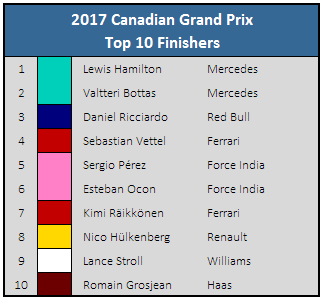 Overtaking is proving to be more difficult than ever in 2017, but the Canadian Grand Prix never fails to deliver. At what turned out to be the most exciting race of the season so far, Hamilton won in dominant fashion, achieving the fourth Grand Chelem of his career by taking pole position, the win, the fastest lap of the race, and leading every lap. By taking the front spot on the starting grid he also equaled Ayrton Senna’s 65 career poles and is now just three away from Michael Schumacher’s all-time record.

Despite Hamilton’s dominant win, however, it was rival Sebastian Vettel who stole the spotlight after Max Verstappen broke part of the German’s front wing at the start, forcing him to head to the pits for a replacement. That sent Vettel to the very back of the field on a suboptimal strategy, after which he spent a little over half the race distance working his way up to sixth place.

Vettel was then stuck behind both Force India drivers and Daniel Ricciardo in front of them, with third place—and the taste of podium champagne—tantalizingly close, but he doubted he would be able to make a pass work on his worn tires. Instead he pit for fresh rubber, knowing full well his opponents wouldn’t have to, gambling that he would be able to make up the loss in time and then overtake them in the 20 laps that remained.

His subsequent charge was phenomenal. With six laps to go Vettel finally caught up to the pack once again, putting him in the same position as before the pit stop but with much better grip from his tires to attempt a move. The battle ahead of him was fierce as well: both Force India drivers were on the radio trying to convince their team it was in their best interest to put them, rather than their teammate, in front to attempt to pass Ricciardo.

As they squabbled and battled, Vettel was able to get right behind them and pull off the overtake of the race: a brave late-braking move on the dusty tarmac of the inside of turn 1 to get by Esteban Ocon. Vettel then overtook Sergio Pérez two lap laters and had the race lasted just another two laps he would have very likely gotten past Ricciardo as well.

The podium interview was exciting too, with Sir Patrick Stewart making an appearance and drinking one of Ricciardo’s famous shoeys—that’s champagne out of the driver’s shoe, if you’re not familiar with the practice, and yes it’s as disgusting as it sounds.

Though Vettel’s recovery made for a great watch, it was a poor result for Ferrari. Mercedes got back ahead in the constructors’ standings with their first 1-2 finish of the season, while Räikkönen could only manage seventh after a brake issue struck in the closing stages of the race. Nonetheless, Vettel is still twelve points ahead of Hamilton and his efforts today may well prove to have been decisive as their tight championship battle develops. 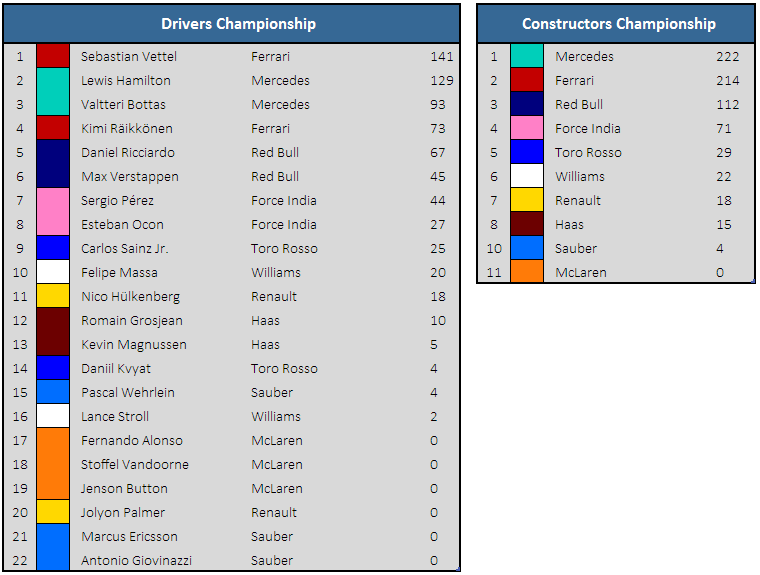