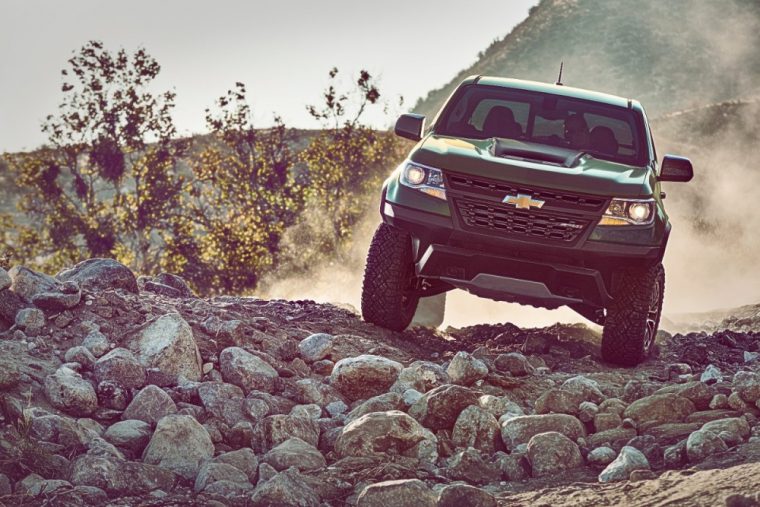 The 2017 Chevrolet Colorado ZR2 will become available in spring 2017

General Motors has finally released pricing details for the 2017 Colorado ZR2 and it will cost substantially less than many of its off-road competitors.

The new Chevy Colorado ZR2 will carry a starting MSRP of $40,995 when it’s released this spring and that’s including the $940 destination fee. This means the ZR2 will be more than $2,000 cheaper than the Toyota Tacoma TRD Pro when that model is equipped with an automatic transmission.

For the asking price of $40,955, the Colorado ZR2 will come with an abundance of off-road features, including 31-inch Goodyear Wrangler Duratrac off-road tires, a two-inch lifted suspension, and class-exclusive front and rear locking electronic differentials, as well as a segment-exclusive Multimatic Dynamic Suspensions Spool Valve dampers.

Motivating the Colorado ZR2 is a 3.6-liter V6 engine rated at 306 horsepower and 275 lb-ft of torque. While that motor comes standard on the ZR2, along with four-wheel drive, a 2.8-liter Duramax turbo-diesel is also available that provides 186 horsepower and 369 lb-ft of torque. That optional diesel works with a six-speed automatic transmission, but the gasoline-powered V6 comes paired with an eight-speed automatic gearbox.

“ZR2 is truly a segment of one and does everything well — from traversing heavy two-track trails to high-speed desert running and full-on rock crawling. We’re thrilled to be able to offer it for more than $2,500 less than the next closest comparable vehicles,” said Chevrolet Trucks Marketing Director Sandor Piszar. “Taken in the context of serious off-roading, $2,000 will buy you 50 years of annual passes to Arches National Park in Moab, Utah.”

Need A New Car? Check out these incentives for new GM cars and SUVs

The News Wheel is live tweeting, Instagramming, Facebooking, and more from the 2017 Chicago Auto Show. Follow The News Wheel on social media to stay up-to-date on all things CAS 2017 and perhaps catch a closer look at this new model.