The 2017 Chevrolet Equinox is a mid-size crossover that carries a starting MSRP of $23,100. Known for its spacious cabin, comfortable ride, and affordable price tag, the new Chevrolet Equinox is the vehicle you’d want to use to transport your family around town. The Equinox has been named “Highest Ranked SUV in Initial Quality in a tie, Two Years in a Row” by J.D. Power. With that type of strong reputation for dependability, it starts to make sense as to why the Equinox continues to be one of Chevy’s best-selling models year after year. Competition for the 2017 Equinox includes the Ford Escape, Mazda CX-5, and Honda CR-V. 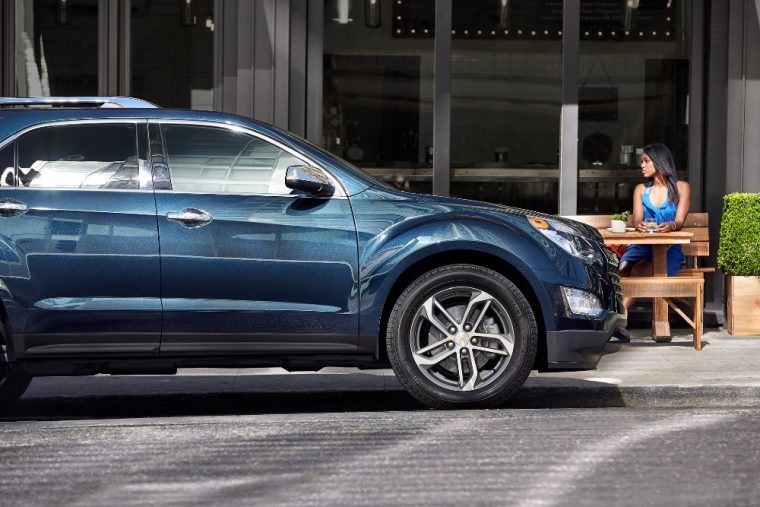 What’s New for the 2017 Chevrolet Equinox?

It’s thought that an all-new version of the Chevrolet Equinox will be released in 2018, so the 2017 version is largely unchanged from the previous model year. One of the things that did change is that the LTZ model is now known as the Premier. In addition, a new Midnight package is available, which adds black 18-inch aluminum wheels, a black grille, black perforated leather-appointed seats, and two black Chevrolet bowtie badges. A Sport package is also offered for the 2017 Equinox, but it basically adds the same contents as the Midnight package, except for its white exterior paint job that’s accented in black.

The 2017 Chevrolet Equinox features a quiet, but confident exterior design, which many consumers say is one of the vehicle’s strongest selling points. Standard features on the new Equinox include 17-inch alloy wheels and automatic headlights, but as previously mentioned a Midnight package is available starting with the LT trim that adds more flamboyance to the crossover. Also, for those buyers who opt for the available V6 engine, they’ll see dual exhaust tips added to the rear of the vehicle. Exterior color options for the 2017 Equinox include Blue Velvet Metallic, Siren Red Tintcoat, and Silver Ice Metallic. 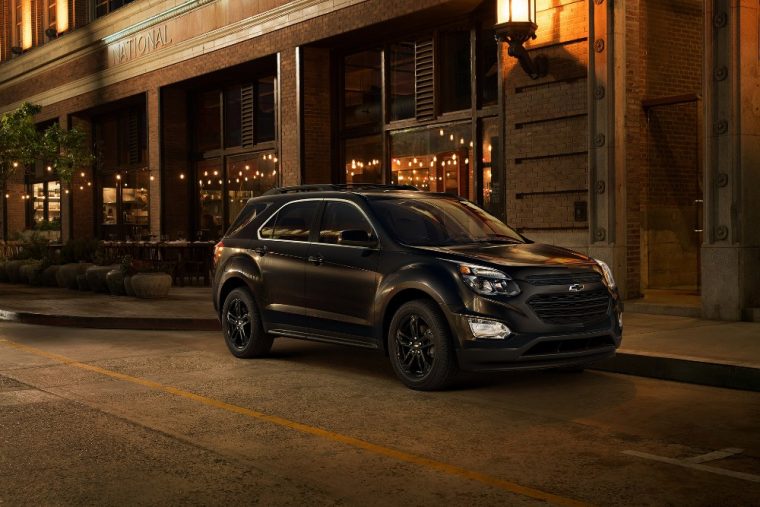 While the 2017 Chevy Equinox is available with a 301-horsepower V6 engine, the standard motor with this crossover is a 2.4-liter four-cylinder rated at 182 horsepower and 172 lb-ft of torque. Consumers have described the base four-cylinder as slow to accelerate, as well as loud when the throttle is pressed against the floor. Upgrading to the 3.6-liter V6 will come at an extra cost, but it will allow the 2017 Equinox to tow up to 3,500 pounds when properly equipped. Furthermore, every 2017 Chevrolet Equinox comes standard with front-wheel drive and a six-speed automatic transmission, though all-wheel drive is also offered. 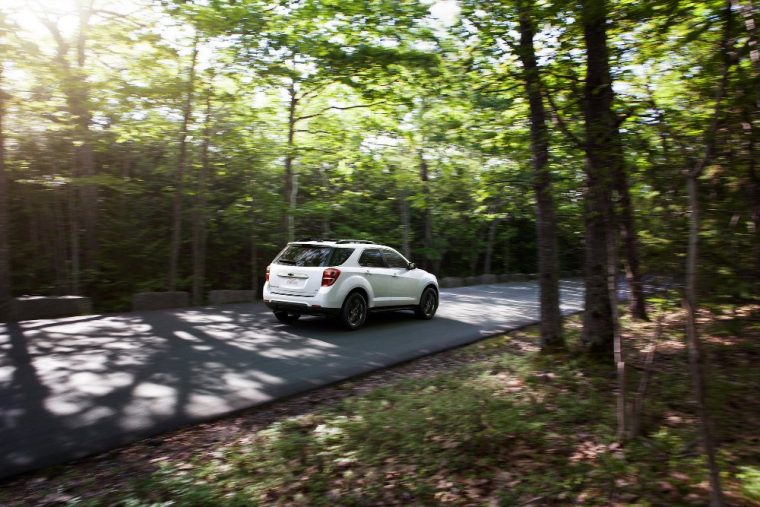 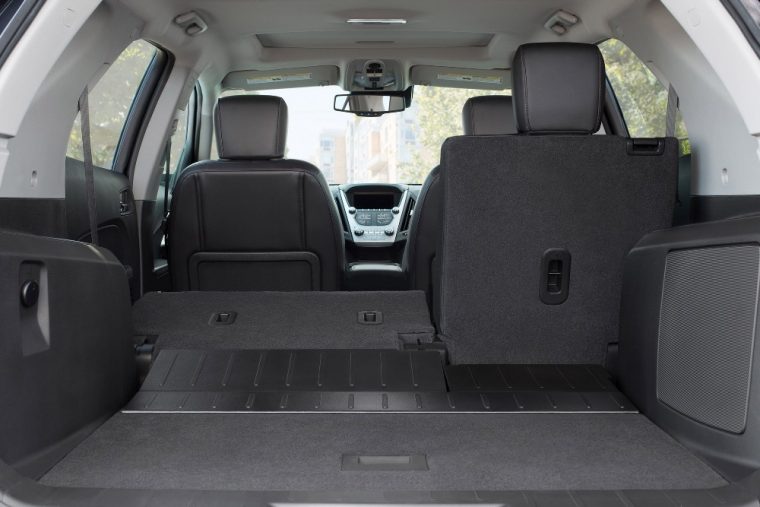 The 2017 Chevrolet Equinox offers a spacious and welcoming cabin that’s filled with standard features such as a 7-inch touchscreen system, a rearview camera, and six-speaker audio system. For a more upscale experience, Chevy offers a Convenience package beginning with the LT trim, which adds heated seats, automatic climate control, remote start, and a leather-wrapped steering wheel, among other features. However, while many other models in the 2017 Chevrolet model lineup are available with Apple CarPlay compatibility, the Chevy Equinox is not among this group. What the Equinox lacks in infotainment, it may make for in cargo space as there is 31.5 cubic feet of storage room behind the rear seats. That figure increases to more than 63 cubic feet with the rear seats folded down. 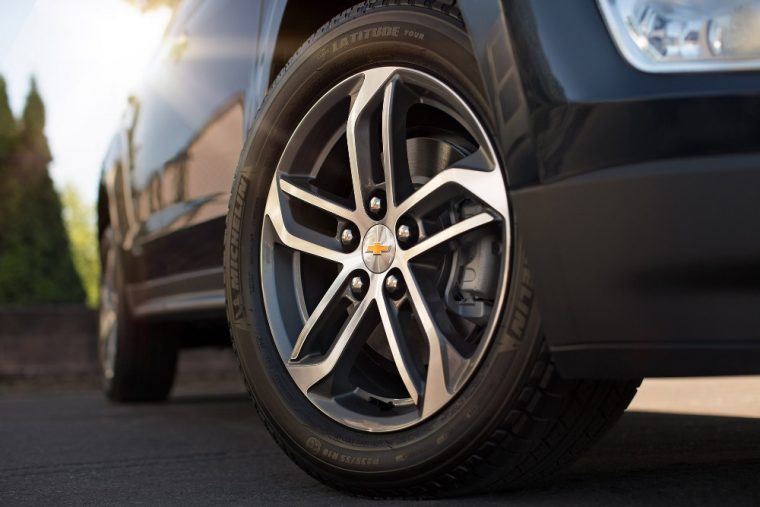 The Chevy Equinox earned four out of a possible five stars in safety tests performed by the federal government. While the Equinox crossover earned the best possible rating of five stars for side protection, it only received four stars in the front crash protection category. Standard safety equipment for the 2017 Equinox includes stability and traction control, six airbags, and an antilock braking system. Chevy also offers a Driver Confidence package and Driver Confidence II package with the new Equinox. These packages add advanced safety technology like rear parking sensors, lane departure warning, a blind-spot monitor with rear cross-traffic alert, and forward collision alert.

Dare To Compare: See how the 2017 Equinox stacks up against the 2016 model