Hamilton Wins in Mixed Conditions at the 2017 Chinese Grand Prix 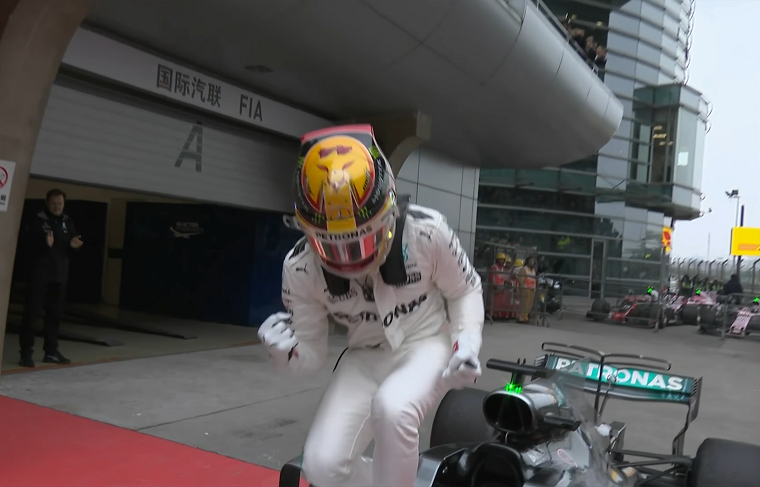 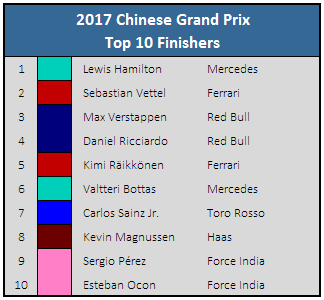 Moments before the lights went out to signal the start of the 2017 Chinese Grand Prix, you couldn’t have faulted any of the teams for questioning which tires to put on their cars. The track was a bit damp in some places and bone dry on others; crucially, though, it was wettest on the starting grid, so ultimately all but one driver opted for the grooved intermediate tires.

Carlos Sainz Jr. was the single brave soul to start on the slicks, but unable to put the power down at the start, he quickly found himself as good as last—until the rest of the field pit for slicks a few laps later, at which point he leapfrogged the better part of it. The gamble paid off and the man who started 11th finished 7th.

On the other hand, a four-place gain is nothing to the likes of Max Verstappen, who came all the way from 16th to finish on the podium. The 19-year-old is already maddeningly quick on the dry, but in wet and mixed conditions he makes getting past the competition look as easy as in a video game. By the end of the first lap, he had already made up nine places.

Lights Out: What the warning lights on your dashboard mean

The big fight, however, was between Mercedes and Ferrari at the front. Unlike in Australia, Sebastian Vettel didn’t benefit from strategy—rather the opposite. He unluckily pit just before Antonio Giovinazzi crashed on the main straight, which brought out the safety car, allowing Lewis Hamilton and the four other drivers to get their own pit stops effectively for free.

Once the race restarted, Vettel was down in 6th and stuck behind his teammate and Daniel Ricciardo’s Red Bull—but with some creative moves eventually managed to get by, then caught up and passed Verstappen, who had been running in 2nd place. Hamilton was too far gone by that point to make a race of it, though—and probably too quick besides. The Brit had the perfect weekend: he scored pole position, the fastest lap, the win, and led every lap, marking his third-ever career Grand Slam.

There were a lot fewer overtakes this year than at the 2016 Chinese Grand Prix, but almost all of the overtakes felt much more meaningful thanks to the reduced effect of DRS. The FIA did said it would review DRS zones after the race in Shanghai, so we’ll see what comes of it. Just two races in so far, however, the 2017 Formula 1 season is looking as good as ever. 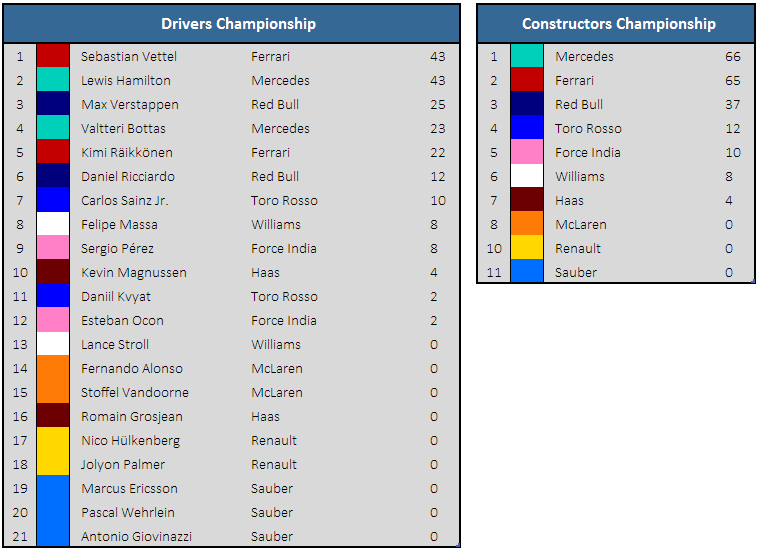