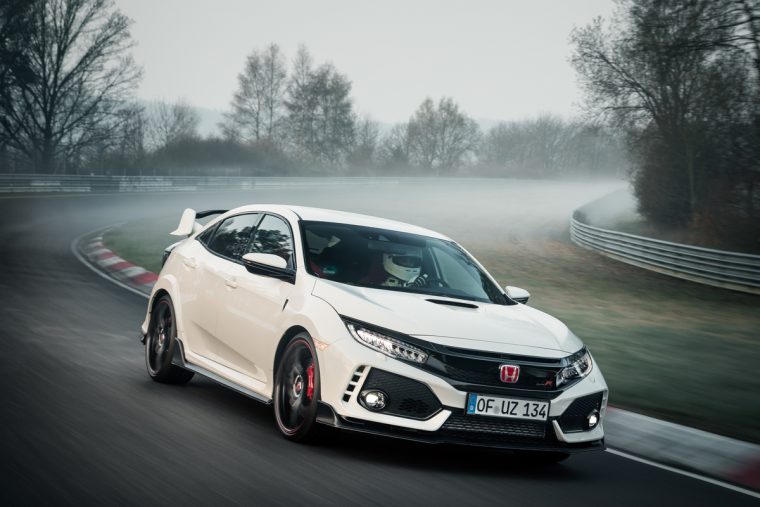 And though the appetites of enthusiasts are probably sufficiently whetted, the Type R just racked up yet another accomplishment ahead of its launch, which is sure to make fans pine even harder for the hot hatch. By setting a new benchmark lap time at Germany’s legendary Nürburgring, the 2017 Honda Civic Type R has claimed the title of world’s fastest front-wheel-drive (FWD) production car.

Honda credits the Civic Type R’s benchmark time to several factors, including its high-performance, 306-horsepower 2.0-liter VTEC TURBO engine, which makes the new Civic Type R the most powerful Honda that’s ever been sold in America. The turbo motor is also manufactured in the states, at Honda’s Anna, Ohio engine plant.

The Type R’s acceleration also got an assist from its six-speed manual transmission with new, lower gear ratios, as well as the vehicle’s comprehensive aerodynamic package, which delivers high-speed stability while balancing aerodynamic stability and drag.

The all-new Civic Type R is also more than 35 lbs. lighter than the previous-generation model.

“The cornering speed achieved in the new Type R is higher because the car features a wider track and tires, a longer wheelbase, a new multi-link suspension in the rear and optimized aerodynamics that improve stability,” said Ryuichi Kijima, the lead chassis engineer for the Honda Civic Type R development, in explaining the new model’s most significant improvements around the Nürburgring compared to the previous-generation Type R.

“For example, drivers typically enter the corner after Metzgesfeld at around 150 km/h (93 mph). Even at this medium-speed corner, the speed is around 10 km/h (6 mph) higher due to the new Type R’s excellent stability. So, with improved cornering performance, we can increase the speed throughout the lap, helping the new Type R to achieve a much quicker lap time.”