The 2017 GMC Terrain is a small SUV that carries a starting MSRP of $24,070. The highlights of the new GMC Terrain include a rugged exterior design, spacious interior, and an available V6 engine that’s rated at 301 horsepower. In addition, consumers can upgrade to their heart’s content with available features such as leather upholstery, heated front seats, and a second row entertainment system with two display screens. Key competitors of the ’17 GMC Terrain include the Subaru Forester, Toyota RAV4, and Honda CR-V.

Dare To Compare: See for yourself how the 2017 Terrain holds up against the 2016 model 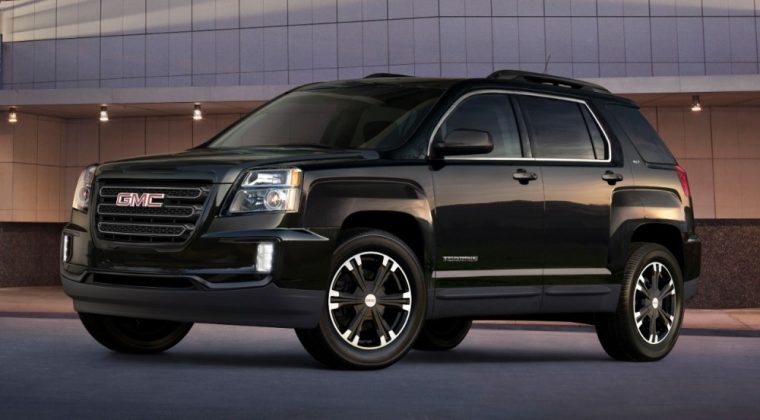 Not much has changed about the GMC Terrain for the 2017 model year. Besides SLE trim’s standard 18-inch alloy wheels, the most notable new feature is the available Nightfall appearance package. This distinctive package gives the GMC Terrain a blacked-out exterior with unique features like a charcoal grille, gloss black accents, body-color door handles, and uniquely designed 18-inch aluminum wheels. 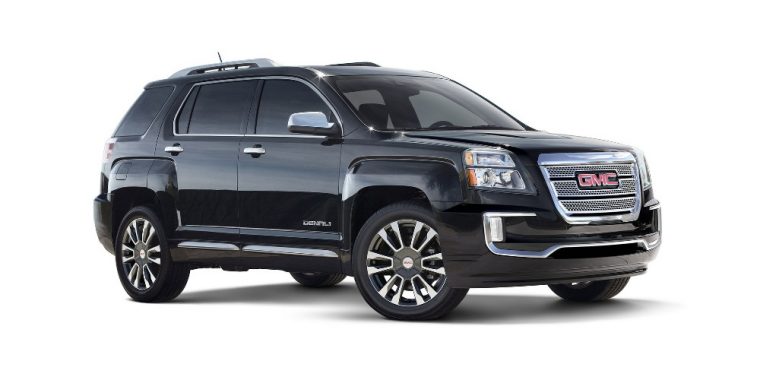 The 2017 GMC Terrain distinguishes itself from the rest the compact SUV segment thanks to its athletic stance and bold exterior design. The SLE trim comes standard with 18-inch alloy wheels, rear privacy glass, and a rather large, attention grabbing 3-bar chrome grille with GMC letters. Those consumers lucky enough to purchase the top-level Denali model will also get a programmable power liftgate that can open and close at the single push of button. In addition, the liftgate can be programmed to only open to a fixed point to avoid hitting the ceiling in a garage. Exterior color options include Onyx Black, White Frost Tricoat, and Dark Sapphire Blue Metallic. 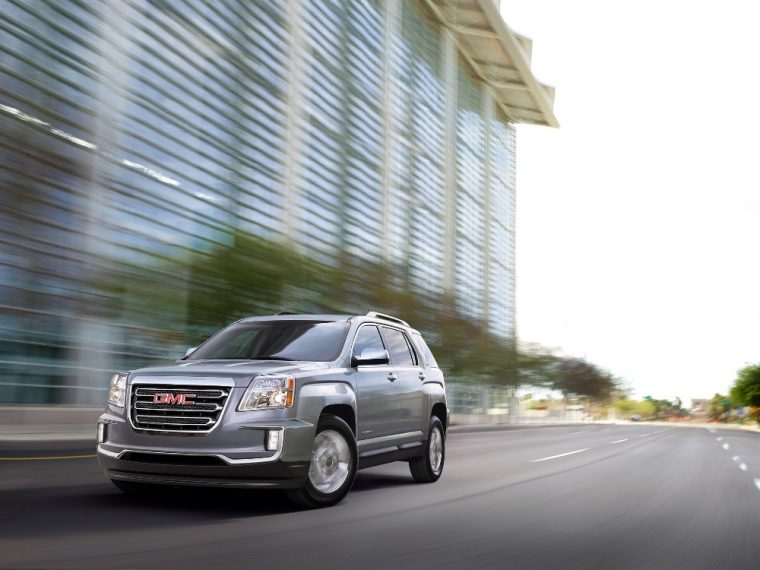 The 2017 GMC Terrain comes standard with a six-speed automatic transmission and 2.4-liter four-cylinder engine that’s rated at 182 horsepower and 172 lb-ft of torque. With this four-cylinder motor, the GMC Terrain can tow up to 1,500 pounds. For additional power, buyers can opt for the available 3.6-liter V6 that’s good for 301 horsepower and 272 lb-ft of torque. When properly equipped, the V6-powered Terrain can tow up to 3,500 pounds. Consumers also get the choice between standard front-wheel drive and available all-wheel drive systems. 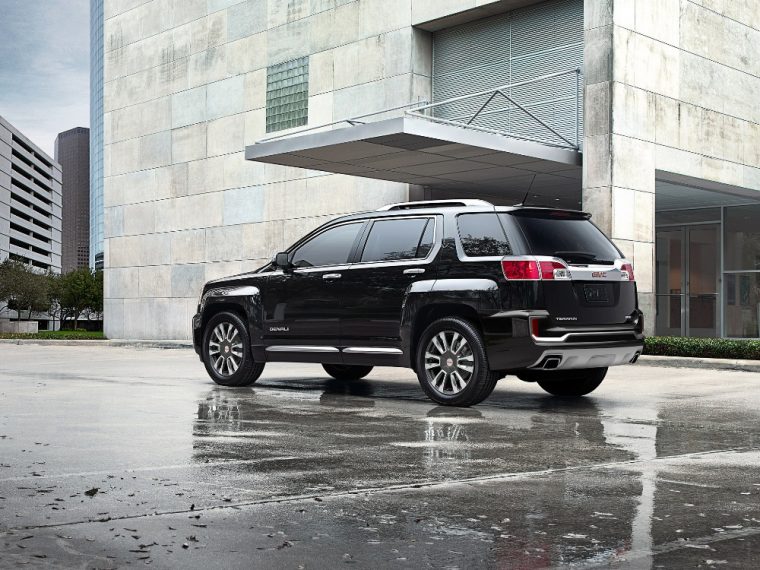 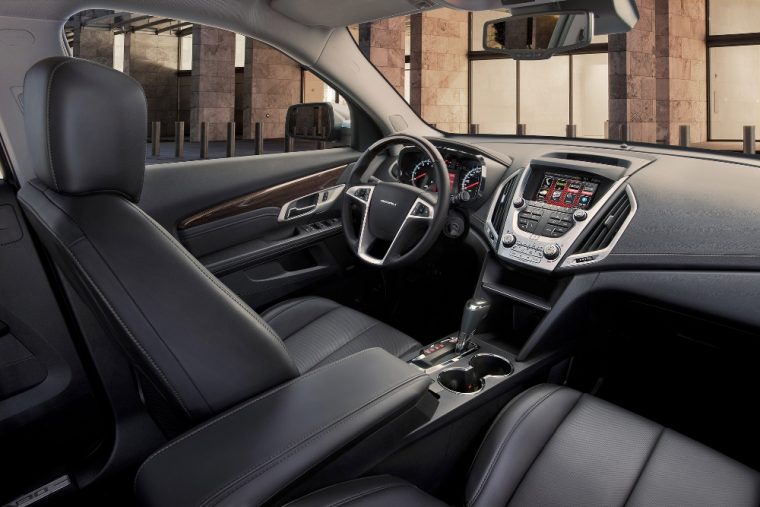 One of the strongest selling points for the 2017 GMC Terrain is its spacious cabin, which provides vast amounts of legroom for rear passengers. In addition, the interior was designed using advanced sound-deadening materials that ensure a calm and quiet ride while out on the highway. Every ’17 Terrain comes standard with an intuitive 7-inch diagonal color touchscreen and a rearview camera. However, taking a step up to the top-level models will add features like a navigation system and leather seating. The only downside to the Terrain’s cabin is that its spacious rear seating takes away from storage space. With the rear seats folded upward, the ’17 Terrain offers 31.6 cubic feet of cargo space, but without any passengers in the vehicle, the rear seats can be folded down to provide 63.7 cubic feet of available storage space. 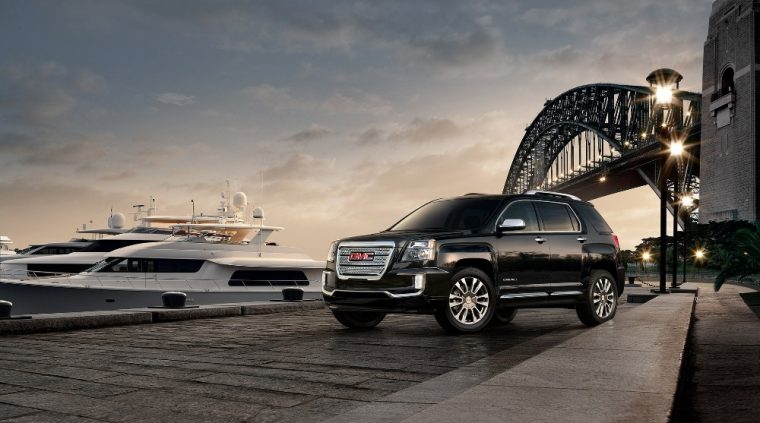 Standard safety features for the 2017 GMC Terrain include stability and traction control, six airbags, antilock brakes, and a rearview camera. Furthermore, consumers with deeper wallets can get advanced safety features such as rear parking sensors, forward-collision alert, lane-departure warning, and blind-spot monitor with rear cross-traffic alert. Those advanced safety technologies are standard on the Denali model and optional for both the SLE 2 and SLT trims. Furthermore, the similarly designed 2016 Terrain earned a four star safety rating from the federal government, with five stars being the best overall rating possible.

Can’t Get Enough GM? Check out these current incentives to buy 2017 GM models