Formula 1: The Fall of the King of Singapore 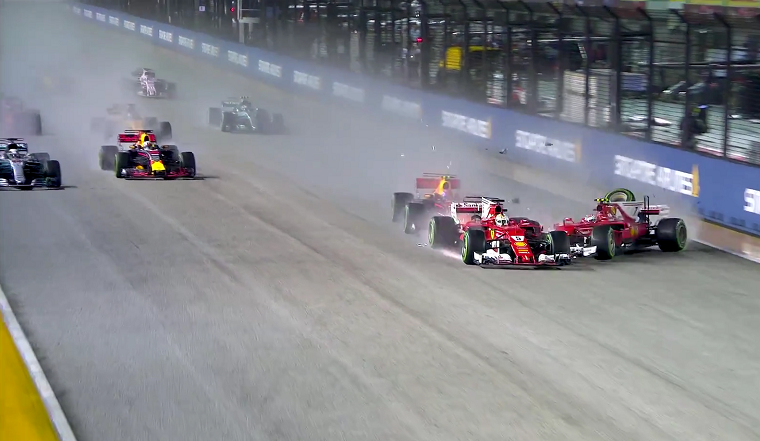 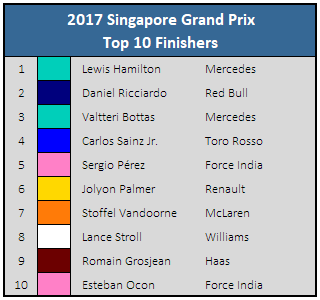 Over the years Sebastian Vettel has come to be regarded as the “King of Singapore” for his various dominating performances under the lights of the Marina Bay Street Circuit—and after Saturday qualifying, where he clocked in yet another smashing lap to put it on pole in Singapore for the fourth time in his career, he truly did seem a master of his realm.

All that would crumble in the evening of the next day. The rain came down to mark Formula One’s very first wet night race, and as the start lights went out and the cars got going, it would only be a few moments before both Ferraris were retired from the race.

There is some controversy as to who is to blame for the chaotic incident that took place in the first few seconds of the Singapore Grand Prix, though it seems fairly clear cut to me: Vettel moved to his left to cut off the charging Max Verstappen, as race leaders typically do. Vettel could not have known or even seen, however, that his teammate Kimi Räikkönen—who had started fourth—had had such a good start that he was already between Verstappen and the wall, which meant neither of them had anywhere to go as Vettel squeezed the former.

As a result Verstappen and Räikkönen collided, which sent the Finn crashing into Vettel’s car. The incident then collected Fernando Alonso, who had had an even more blistering start than Räikkönen. Vettel somehow managed to stay ahead by the second corner, but the ruptured side of his Ferrari spewed fluid all over his rear tire and he spun into the wall, breaking his front wing. Even had he managed to limp his car to the pits without spinning, it was so damaged he almost certainly would have had to retire anyway.

The accident was undoubtedly caused by Vettel and exacerbated by Räikkönen’s optimistic overtake attempt on Verstappen, but I don’t think any of the drivers were at fault. Räikkönen couldn’t have known Vettel was going to squeeze Verstappen so aggressively, and Vettel couldn’t have known another Ferrari would have been in the space he was trying to back Verstappen into. In fact, they all drove exactly the way you’d expect from race car drivers. The whole thing was the very definition of a “racing incident” not deserving of follow-up penalties.

So even as Lewis Hamilton took an easy victory at Formula One’s very first wet nice race, so too did the Singapore Grand Prix mark another first: that of the first double-retirement on the first lap of a Grand Prix for Ferrari, which had somehow managed to escape that nightmare of a scenario in all of its races since 1950. And as fate would have it, it occurred at just about the worst time imaginable, when the Scuderia was poised to take a big chunk of points away from its rival Mercedes, which has always struggled in Singapore. Instead, it was the reverse that took place.

Ferrari is now highly unlikely to catch Mercedes in the constructor’s championship, and Vettel—down 28 points on Lewis Hamilton with only six races to go—will need a miracle to come back at his rival for the driver’s championship. Winning the title is still possible for the German driver, but any failure to capitalize on maximum points in the upcoming races will no doubt be the final nail in the coffin. 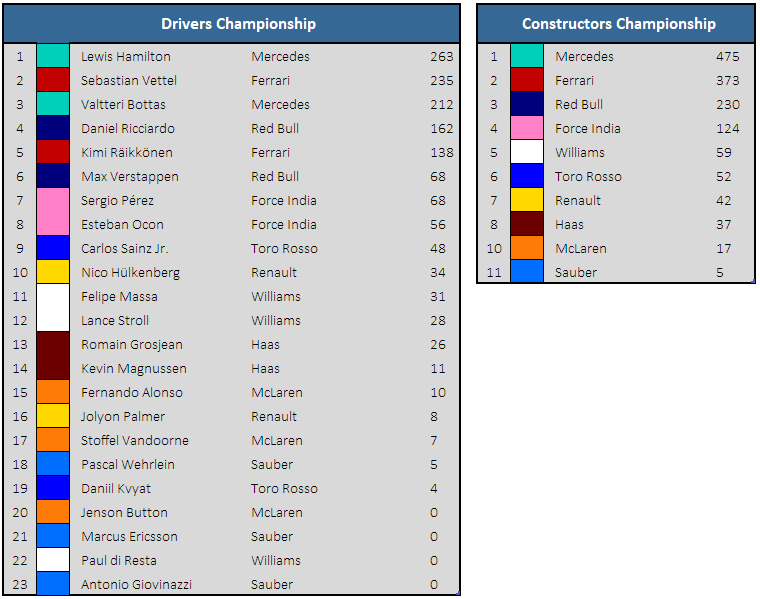