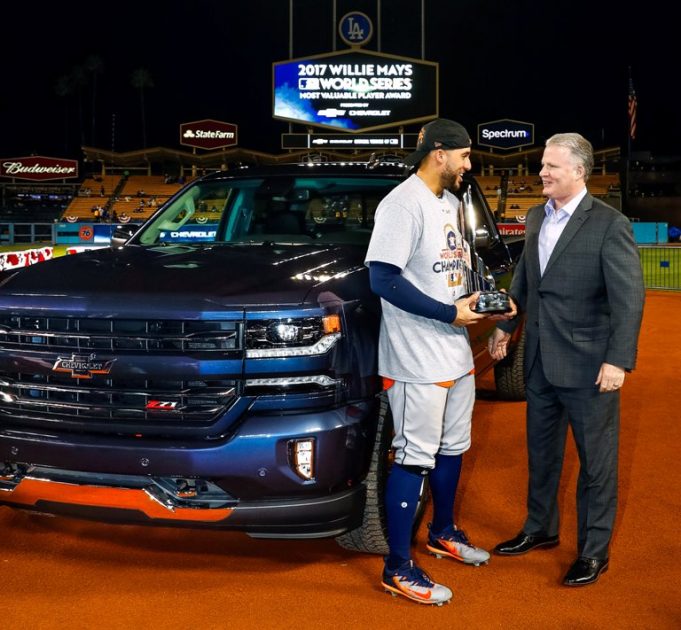 Last night, the Houston Astros won the World Series Championship for the first time in the team’s history. One specific Houston Astros player won something else exciting as well. George Springer was awarded the 2017 Willie Mays World Series Most Valuable Player Award and a 2018 Chevrolet Silverado Centennial Edition.

Springer, a centerfielder for the Astros, scored five home runs and seven RBI during the World Series. With this record, Springer is tied with Reggie Jackson and Chase Utley for the most home runs in a World Series championship.

It is also these feats that helped him to earn the MVP title. The Willie Mays World Series MVP was selected based upon results from a media panel and an online fan poll. 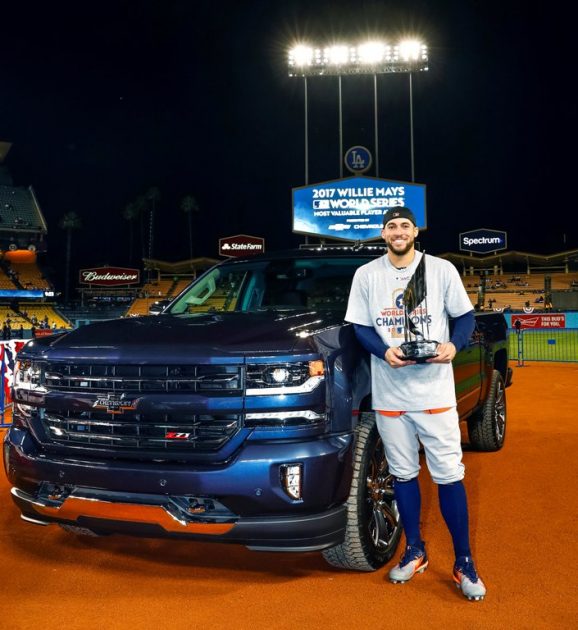 The MVP and his new Chevy

In addition to his MVP Award, Springer also was awarded a brand-new Silverado Centennial Edition by Chevrolet. The special-edition Silverado celebrates 100 years of Chevrolet trucks and comes equipped with a number of exclusive features and amenities, including a heritage bowtie tag and a Centennial Blue paint job.

“In a matchup of the two best teams in baseball, George Springer’s performance on the field tonight and throughout the World Series truly embodies the same ‘Never Give Up’ spirit that drives the Chevrolet team to win every day,” said Brian Sweeney, U.S. vice president of Chevrolet. “We are proud to recognize Springer’s tremendous efforts with the Willie Mays World Series MVP award and the 2018 Chevrolet Silverado Centennial Edition pickup.”

Chevrolet has been the official vehicle of Major League Baseball since 2005. Chevrolet is also a sponsor of Play Ball, an effort to encourage young people in the community to participate in the sport of baseball.

Walking away with the World Series MVP title is undeniably a great honor. Still, driving away with said award behind the wheel of a brand-new Chevy truck is undoubtedly even better.