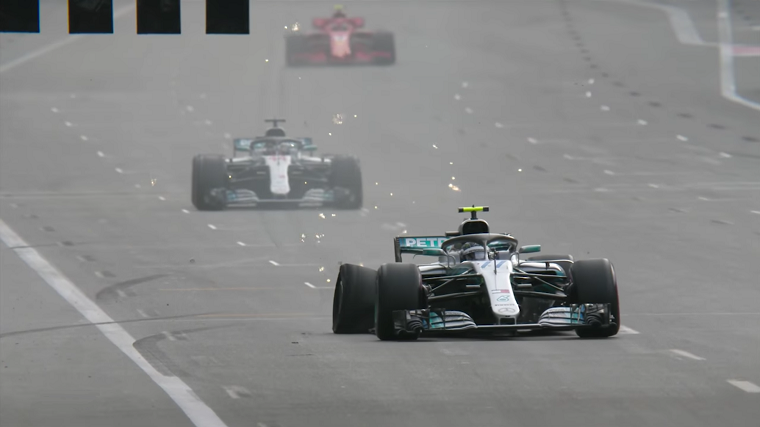 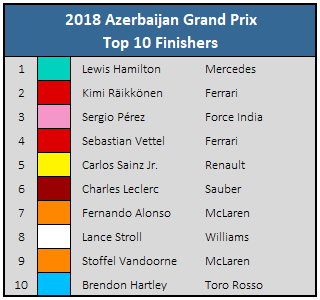 It was once again looking like a strong weekend for Ferrari at the Baku circuit in Azerbaijan, and once again the team in red left the race track disappointed.

It started with the bittersweet qualifying on Saturday: Sebastian Vettel took pole position for the third time in a row, but only because his teammate Kimi Räikkönen lost the rear at the final corner while on an even quicker lap. Instead, the so-called Iceman started sixth.

Then Räikkönen was hit by Force India’s Esteban Ocon during the first lap and forced to head into the pits early for a nose change. The safety car that was brought out as a result of the collision helped him a little, but he would still have a lot of overtaking to do.

Vettel was comfortably controlling the race in front, managing a healthy gap to Mercedes’ Lewis Hamilton and Valtteri Bottas. But Ferrari’s strategist were, as they frequently are, a step behind and pit Vettel much earlier than necessary to put him on the soft compound tires.

This meant that if Bottas pit late for the ultrasoft tires, which are significantly quicker than the softs, he would have a strong chance at catching and passing Vettel at the end of the race. And if another safety car came out, he wouldn’t even need to pass him—he could simply pit for free and come out in the lead. And that’s exactly what happened.

After battling wheel-to-wheel throughout the entire race, Red Bull teammates Max Verstappen and Daniel Ricciardo committed the cardinal sin of Formula One by crashing into each other. It was difficult to tell who was at fault, though that probably doesn’t matter: Red Bull team principal Christian Horner and chief technical officer Adrian Newey were absolutely seething.

Few can blame them for their disappointment. Red Bull already has half the championship points to its name as Ferrari and Mercedes, despite having a very competitive race package, primarily because of reliability issues and driver recklessness.

Their crash and the subsequent safety car did help put Räikkönen right back into play, but cost Vettel the lead, who then made his only mistake of the entire weekend by locking up into the first corner while trying to pass Bottas on the restart. He immediately lost two positions, and then a third because the flat spot on his tire prevented him from keeping Sergio Perez’s Force India at bay.

Then it was Bottas’s time for a bit of misfortune. On the main straight, with only two laps to go, he drove over a piece of metal that had not been cleared from the track and was forced to retire from a puncture. This gifted the win to Lewis Hamilton, who now leads the championship.

Nonetheless, the Ferrari car looks the strongest of the bunch so far in 2018, with Mercedes and Red Bull a close second and third, respectively. Behind them, the midfield is extremely close, with Renault and McLaren looking like the best contenders for fourth, though Force India and Haas also seem tough to beat depending on the track. Even Sauber, last year the slowest team by far, is doing very well, and with rookie Charles Leclerc at the wheel scored good points today.

The next race will take place in Barcelona, Spain, where many of the teams are expected to bring major upgrades. Stay tuned. 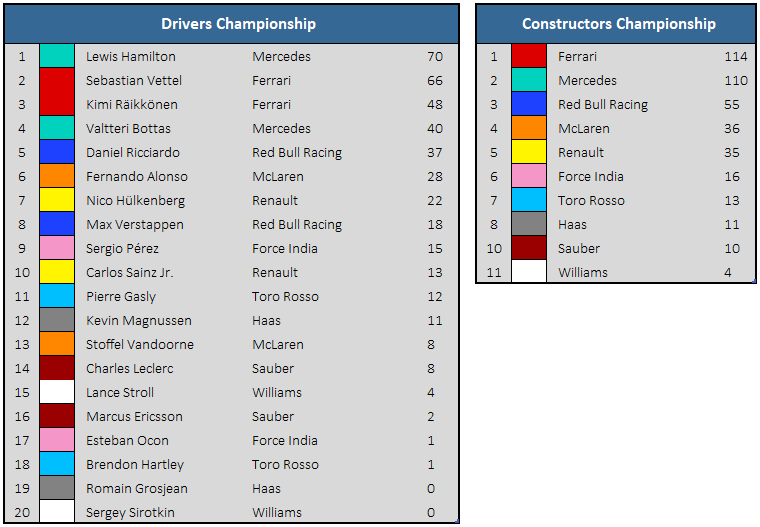