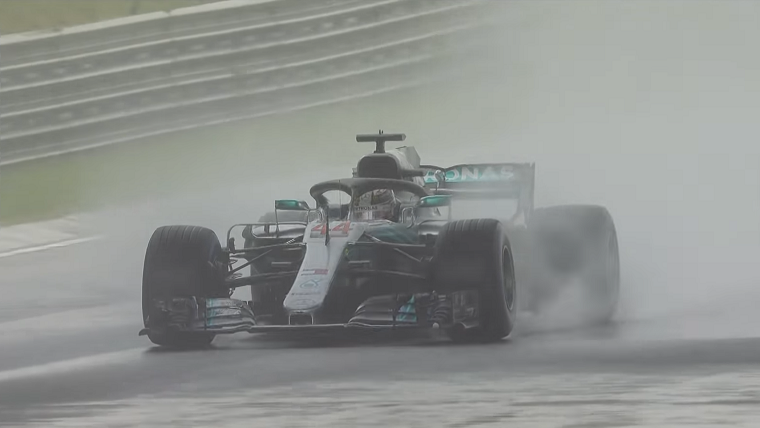 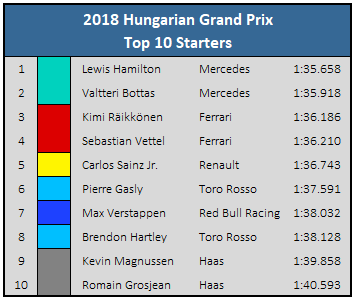 It was not looking good for Mercedes as the weekend’s first official Formula One qualifying session began this morning at the Hungaroring circuit in Mogyoród, Hungary.

The team had looked woefully slow compared to its Ferrari rival throughout all of practice, yet somehow came out of it having locked out the front row of the grid for the 2018 Hungarian GP.

The Ferrari, it seems, is not as strong in the wet, and of course there’s always the matter of Lewis Hamilton’s breathtaking talent in such conditions.

Changing conditions from dry, to damp, back to dry, then to a torrential downpour created all sorts of challenges for the drivers as they attempted to set fast laps while hoping to get on the right tire at the right time.

After dominating Q1 and Q2, Sebastian Vettel seemed to struggle on the blue-striped full-wet tires before slotting himself into fourth with only precious time left on the clock.

His teammate Kimi Räikkönen maintains he had the pace for pole but was slowed down by Romain Grosjean’s Haas near the end of the session and was unable to give it another go.

No doubt among those who went home with some of the biggest smiles were Carlos Sainz and both of the Toro Rosso-Honda boys, who showed great skill to place as high as they did.

In fact, it was strange to see Pierre Gasly beat Max Verstappen, an exceptional wet weather driver, by nearly half a second, and for Brendon Hartley to almost get ahead of the young Dutchman as well.

Red Bull Racing will not likely be pleased to have been so thoroughly beaten by its B team, though the consolation prize is that it will be getting its Honda engines next year.

The two Haas drivers closed out the top 10, continuing the American team’s resurgence in this part of the season. Red Bull’s Daniel Ricciardo, having been put on the wrong strategy in Q2, starts only 12th, sandwiched between Nico Hulkenberg and Fernando Alonso, both of whom will be eager to make up places on Sunday.

It remains to be seen just how easy — or rather, how difficult — it will be to overtake tomorrow. Historically, it’s not a great track for passing, as we saw last year when Vettel experienced a steering issue but still managed to stay in the lead for many laps.

That means that although Ferrari seems like the strongest team in the dry, we shouldn’t expect Mercedes to fail to win the 2018 Hungarian GP tomorrow barring some truly unusual events.