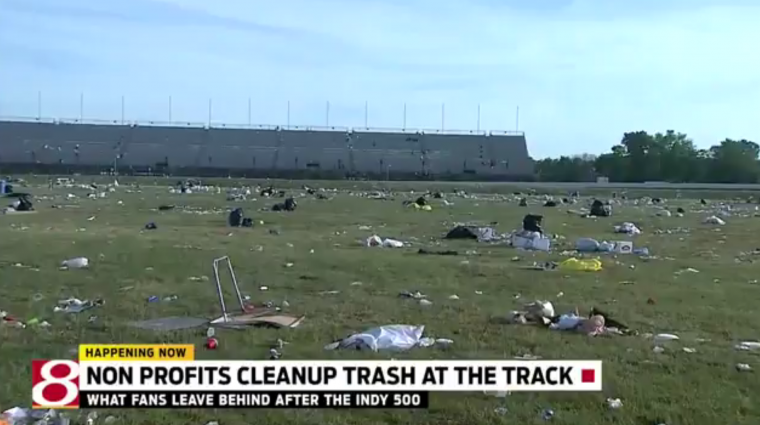 The 100th running of the Indianapolis 500 this weekend was a major milestone for the “Greatest Spectacle in Racing,” inspiring 350,000 fans to attend. And with the record crowds came record amounts of trash.

Due to its admittedly awesome policy of allowing fans to bring in coolers full of beer cans (and full kegs if you park in the infield!), a ton of adult beverages made their way into the Brickyard on Sunday, and few made their way back out.

Which is to say, a bunch of racing fans got trashed at the Indy 500, and then left behind their trash.

Though the trash consisted mainly of alcohol containers, there were some other items left behind, including lawn chairs, a grill, and according to WishTV reporter Evan Johnson, “a bucket that someone turned into a toilet,” which he described as, “very interesting.”

Also of interest—Indiana State Excise Police cited 188 people over the weekend, with 139 summonses issued for illegal possession or consumption of alcohol. Of the many arrests and citations, 130 were issued to minors.

And apparently many of those minors were busted before they could finish their beer, considering that one of the volunteers who helped clean up the trash on Monday told the Indy Star that “every time you empty the trash cans, liquids pour out.” The paper also reported that she was “covered from the waist down with a mix of discarded drinks.”

It’s a dirty job, but somebody’s got to do it. And those “somebodys,” it turns out, are mostly teenaged cheerleaders and church groups, who are paid a stipend for their efforts, which they use to raise money for their organizations.