Some people say that UFC star Conor McGregor is the most entertaining fighter since the late Muhammad Ali. McGregor is young and brash, and he talks a lot of trash, but the thing about it is that he can back it up. Since making his UFC debut in April 2013, McGregor has accumulated a 9-1 record and he avenged that one loss in a majority decision over Nate Diaz earlier this year. With all of that success, McGregor’s popularity has grown immensely over the last few years and so has his bank account. Forbes reported the Irish-born fighter has earned more than $22 million in his professional fighting career. McGregor has spent a large chunk of that change on his extravagant car collection. Below are five of the most exotic cars that can be seen on McGregor’s official Instagram account… 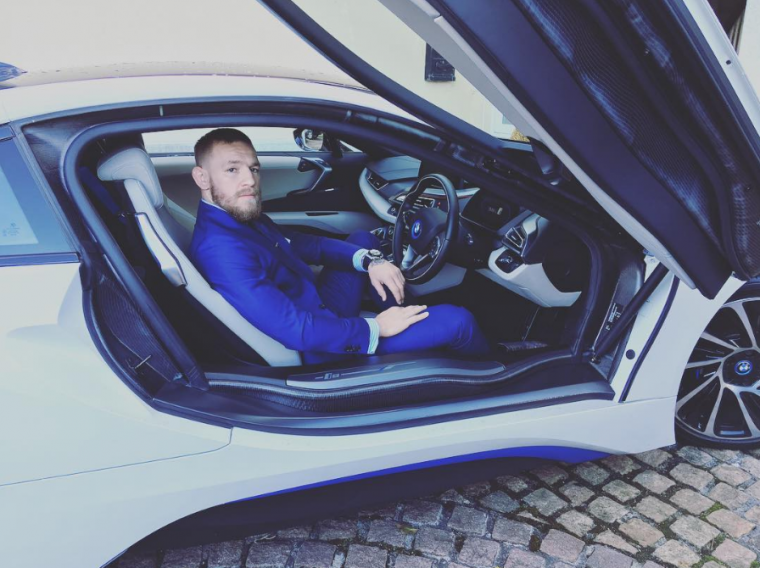 The BMW i8 is a popular car in the entertainment world. Everybody from Fetty Wap to DJ Mustard has one of these supercars in their garage and 50 Cent said he would too, but his muscular physique prevents him from being able to fit inside the i8 coupe. So what makes the BMW i8 so appealing? Well, for starters, the BMW i8 is powered by a unique hybrid powertrain that provides 357 horsepower, which allows the i8 supercar to zip from 0 to 60 mph in 4.2 seconds and hit a top speed of 155 mph. On top of that, the new BMW i8 is relatively affordable for supercar standards, as the 2017 model carries a starting MSRP of just $140,700. 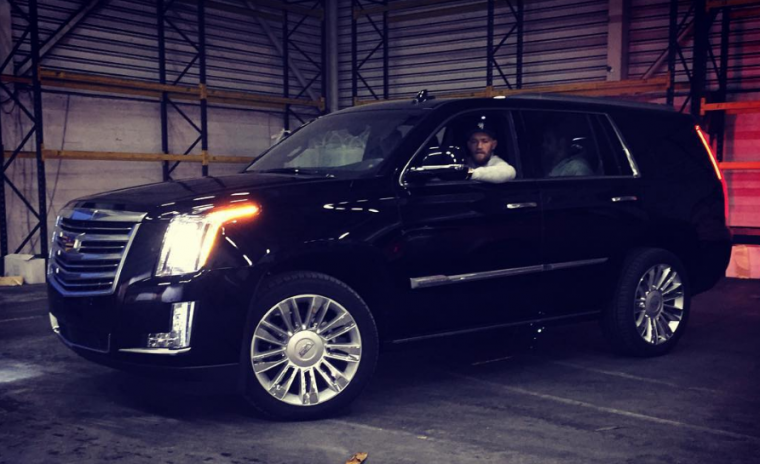 The fourth-generation Cadillac Escalade can accelerate from 0 to 60 mph in approximately 6.1 seconds, which is only seven seconds less than what it took for McGregor to knock out Jose Aldo when the two fought for the UFC Featherweight Championship back on December 12, 2015. That 13-second fight was the shortest of any title bout in the history of the UFC and the victory also made McGregor the very first Irish-born champion ever in the sport. With a starting MSRP of $73,395, the Cadillac Escalade is one of the most affordable vehicles in McGregor’s growing collection. 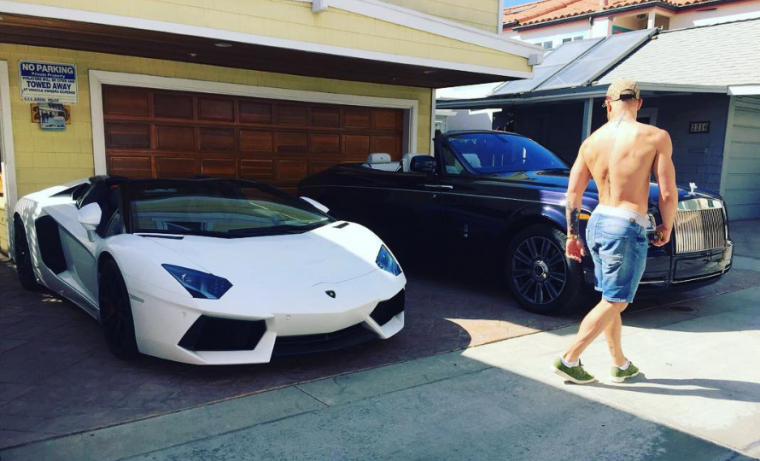 UFC fans across the country were surprised and saddened when McGregor announced he was retiring after suffering his first UFC loss at the hands of Nate Diaz. However, those tech-savvy people who follow McGregor on Instagram know he enjoys the finer things in life, so it was only a matter of time before he unretired and got back to cashing checks. McGregor would need all of that cash to afford the Lamborghini Aventador Roadster and its price tag of more than $400,000. Equipped with a naturally-aspirated V12 engine good for 691 horsepower and 509 lb-ft of torque, the Aventador Roadster is capable of rocketing from 0-60 mph in 3 seconds and maxes out at 217 mph. 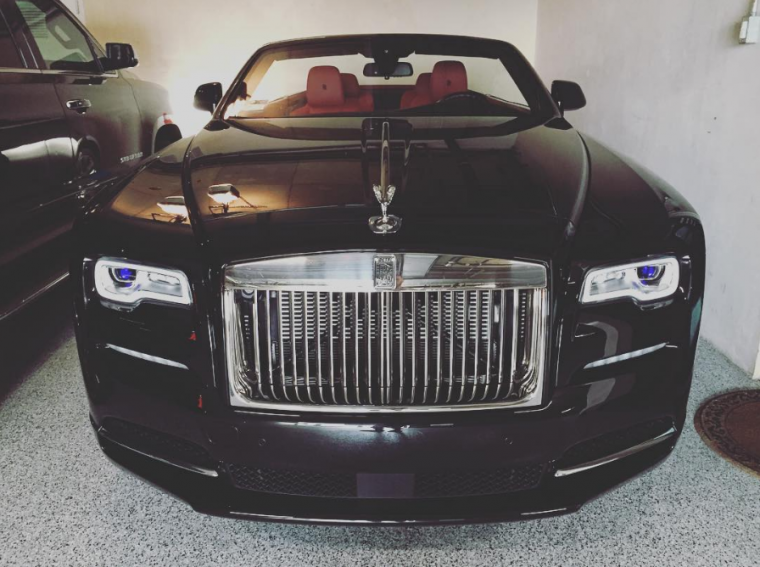 The Rolls-Royce Dawn is one of the newest additions to McGregor’s garage, and it’s basically the replacement model for the Rolls Royce Phantom Drophead, which is another model the prize fighter keeps in his collection. Given McGegor’s cocky personality, it comes as little surprise that most of the cars he owns are convertible models. The Dawn comes equipped with a 6.6-liter twin-turbo V12 engine that cranks out 563 horsepower and 575 lb-ft of torque. That’s enough power to send this 5,776-pound convertible from 0 to 60 mph in 4.9 seconds. The only downside is it only yields an EPA-estimated 12 mpg in the city. That means McGregor might be forced to mingle with excited fans whenever he stops to refuel, but who in their right mind would pick a fight with the UFC Featherweight Champion? 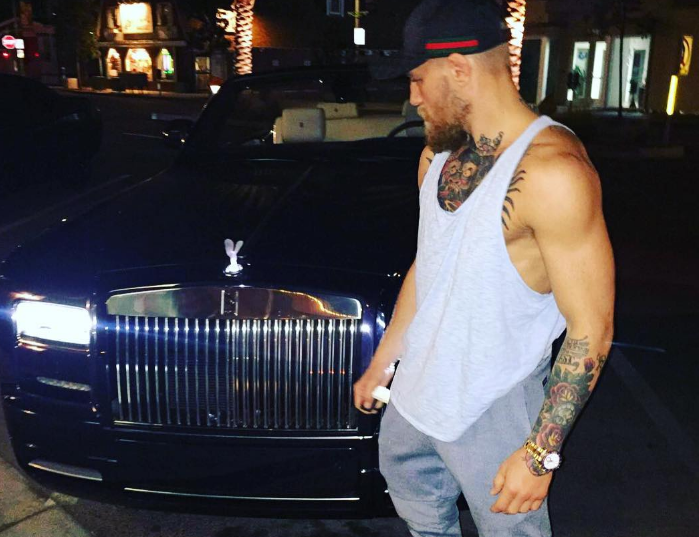 McGregor’s Instagram page is filled with pictures showcasing his fancy car collection, but the car he shares photos of more than any other may be his Rolls-Royce Phantom Drophead. This Rolls is by no means a small car as it weighs almost 6,000 pounds, which is the reason it needs a 6.7-liter V12 engine rated at 453 horsepower and 531 lb-ft of toque in order to push it around. In addition, the new Rolls-Royce Phantom Drophead coupe carries a starting MSRP of $492,000, but that’s almost chump change for McGregor nowadays, especially when you consider he earned a reported $3 million in his rematch victory against the aforementioned Diaz. Both fighters have hinted at a possible third fight and that will certainly add to McGregor’s mammoth back account. The only question is, what car would McGregor buy to celebrate a possible second win against Diaz?