Cristiano Ronaldo is one of the biggest stars in all of professional soccer, as evidenced by him having more than 100 million Facebook and 35 million Twitter followers. Ronaldo began playing professionally at 18 years old and has broken records playing for both Manchester United and Real Madrid. Both teams have paid Ronaldo handsomely for his services, and Forbes reported that Ronaldo earned approximately $79.5 million in 2015 alone. With all that cash, the three-time FIFA Best Player in the World award winner has accumulated a large car collection. Below are five of the coolest cars that can be seen on his official Instagram…

Celebrity Rides: Take a look at the 10 best celebrity cars of 2015 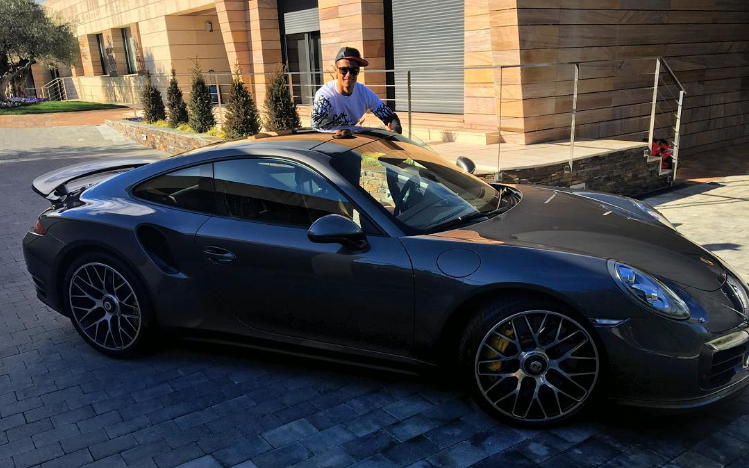 The Porsche 911 Turbo S might not be Ronaldo’s most expensive car, but it may be the quickest
Photo: © Cristiano

With a garage full of Lamborghini and Ferrari supercars, the Porsche 911 Turbo S might appear to be one of Ronaldo’s humbler vehicles, but don’t let this car fool you; the Turbo S is one of the fastest vehicles that can still be driven on the streets legally. This all-wheel drive sports car is powered by a 3.8-liter twin-turbo six-cylinder engine that’s rated at 580 horsepower and 553 lb-ft of torque. That powerful engine allows this legendary German automobile to accelerate from 0 to 60 mph in less than three seconds and can reach a top speed of 205 mph. 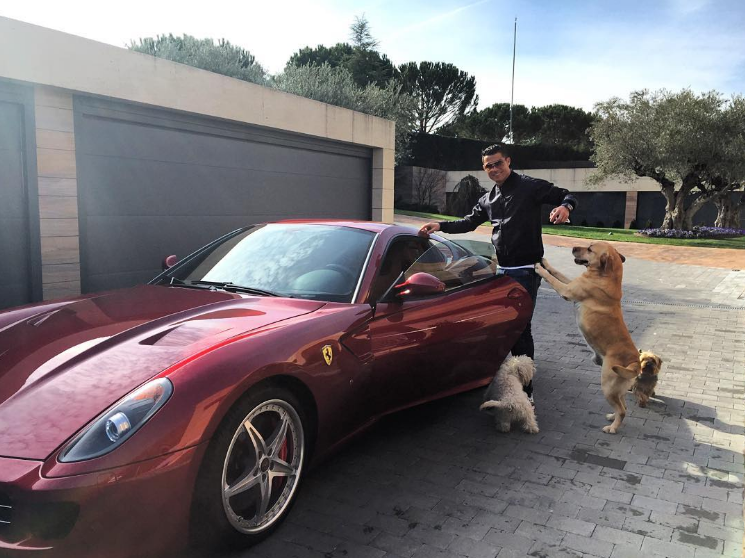 Ronaldo reportedly crashed another Ferrari 599 GTB and this is its replacement
Photo: © Cristiano

The Ferrari 599 GTB is a two-door Italian sports car that served as the replacement for the 575 Maranello. Ferrari wanted more than $300,000 for the 599 GTB upon the vehicle’s initial release, and it’s also notable for being the last Ferrari automobile that was available with a manual transmission. The 559 GTB received its motivation from a 6.0-liter naturally-aspirated V12 engine that produced 612 horsepower and 448 lb-ft of torque. This sports car also came equipped with a specially-tuned suspension that utilized magnetic dampers to improve its cornering abilities. Ferrari claimed the 599 GTB could reach 60 mph in just 3.7 seconds and topped out at 205 mph. 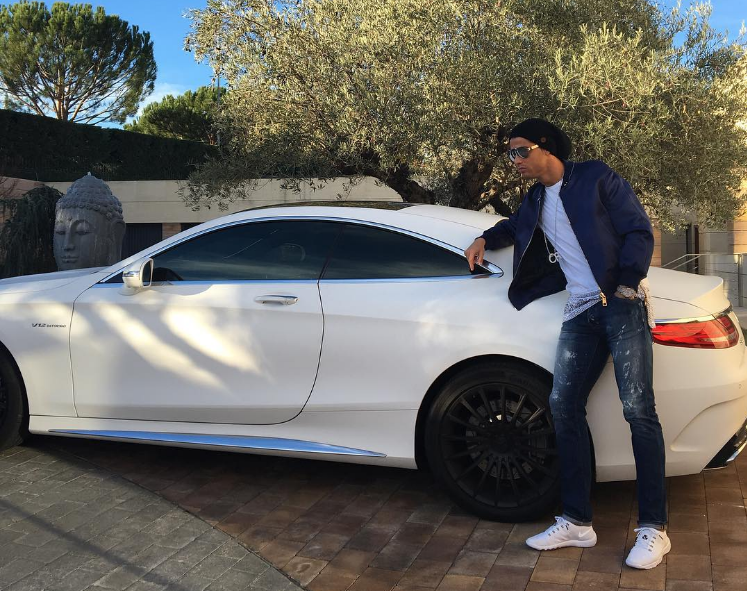 Did anyone else notice that Ronaldo matched his shoes with the S65?
Photo: © Cristiano

Carrying a starting MSRP of $234,050, the Mercedes-AMG S65 coupe is well out of the the price range of many Americans, but for Ronaldo, picking up the S65 coupe was probably like a normal person grabbing a bag of Skittles at the checkout counter. Besides featuring an elegant and refined interior, as well as many advanced safety technologies, the S65 coupe also comes equipped with a handcrafted 6.0-liter AMG biturbo V12 engine that generates 621 horsepower and 738 lb-ft or torque. That engine works with an AMG seven-speed transmission to yield an EPA-estimated 14 mpg in the city and 21 mpg on the highway. The S65 coupe is only available in rear-wheel drive and can travel from 0 to 60 mph in just four seconds. 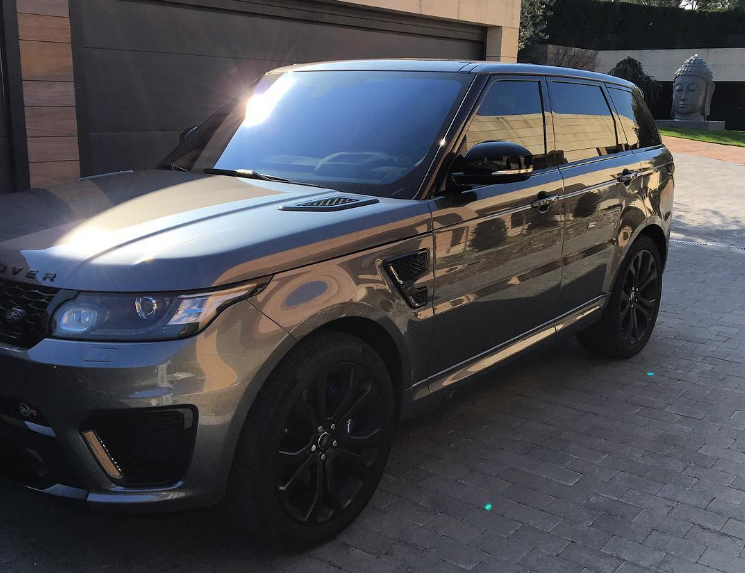 This Range Rover Sport is just one premium vehicle that Ronaldo gets to choose from each day
Photo: © Cristiano

This is one of the very rare car photos you’ll see on Ronaldo’s Instagram in which he isn’t standing directly next to his vehicle. For years now, the soccer icon has been sharing pictures of himself with his cars, perhaps to show that yes he’s indeed handsome, yes he’s super rich, and unlike many other depressed rich folk, Ronaldo is thoroughly enjoying the good life and all of the spoils that come with being arguable the best soccer player on the planet. As for his vehicle, the Range Rover Sport boasts one of the most stylish and bold designs found in the mid-size luxury SUV segment. The 2014 Range Rover Sport is also available with a 5.0-liter supercharged V8 engine rated at 510 horsepower and 461 lb-ft of torque. It doesn’t seem like Ronaldo is willing to put anything in his garage that comes with less than 500 horses. 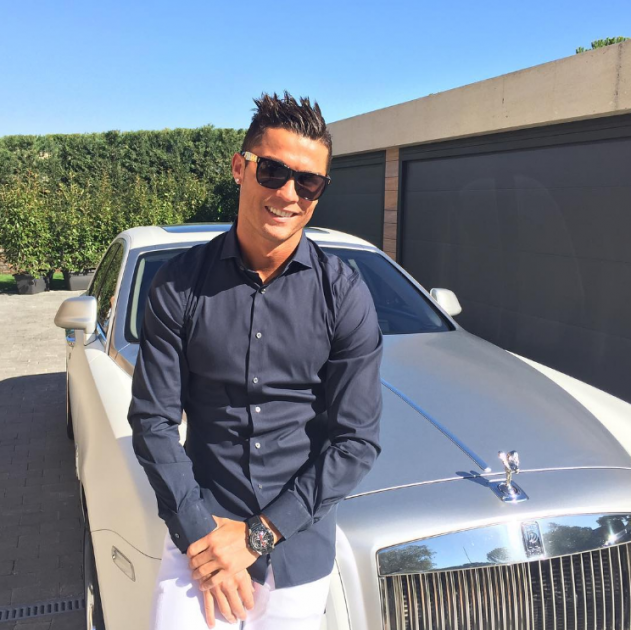 The Rolls Royce Ghost provoked a big smile from Ronaldo on the day of this picture
Photo: © Cristiano

What celebrity car collection would be complete without a Rolls-Royce? UFC fighter Conor McGregor owns a Rolls Royce Phantom Drophead and Pittsburg Steelers’ wide receiver Antonio Brown drove a custom Rolls Royce Phanton to training camp last year, so it be could argued that Ronaldo has set a bit of a trend among professional athletes. Also, while Ronaldo might not yet have the newer Rolls Royce Ghost Series II—at least on his Instagram—the previous Ghost still came with a powerful V12 engine that produced more than 500 horsepower.

Related: Check out the 5 coolest cars from Justin Bieber’s Instagram