For years, Kylie Jenner was considered the shy younger sister of reality TV star Kim Kardashian, but all of that changed when Jenner turned 18 years old in 2015. For her birthday that year, Jenner’s boyfriend–rap star Tyga—gave her a white Ferrari 458 Italia Spider valued at more than $250,000. Thanks to her highly publicized relationship with the rapper, along with her regular appearances on Keeping Up with the Kardashians, Jenner’s fan base has grown substantially and she is now one of the 10 most followed celebrities on Instagram. Besides sharing numerous selfies and other modeling pics through the social media platform, Jenner also uses the medium as a way to show off her one-of-a-kind car collection, which is worth more than $1 million. Below are five of the most unique cars that can be seen on Kylie Jenner’s official Instagram page… 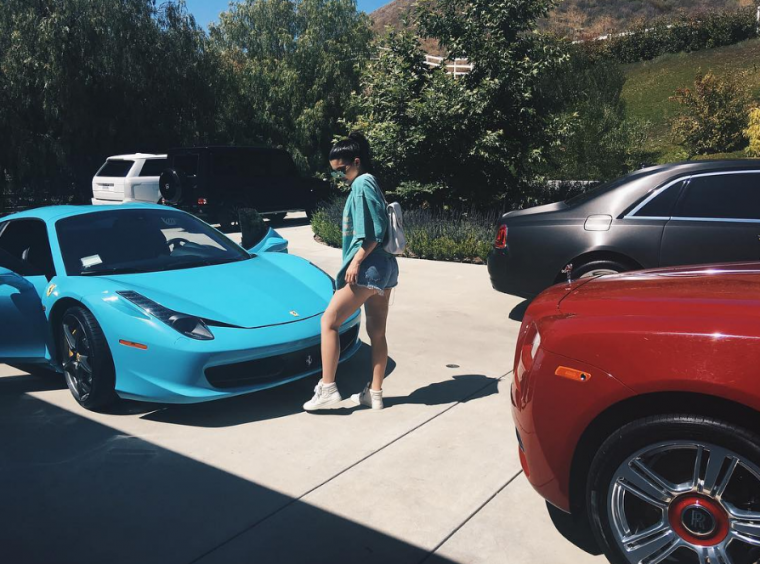 As previously mentioned, Jenner’s Ferrari 458 Italia Spider was a gift from rapper Tyga, but it was all white when she first got it. Months later, Jenner had it modified with a grey vinyl wrap and red Forgiato wheels. However, after the couple split up, Jenner had it wrapped again in the blue hue that can be seen in the pic above. In addition, if you look closely, you can even see Kylie’s name featured on the brake calipers. But, now that the couple is seemingly back together, it should be interesting to see if Kylie returns the Ferrari to its original white exterior, which is the color of many of the vehicles in Tyga’s car collection. 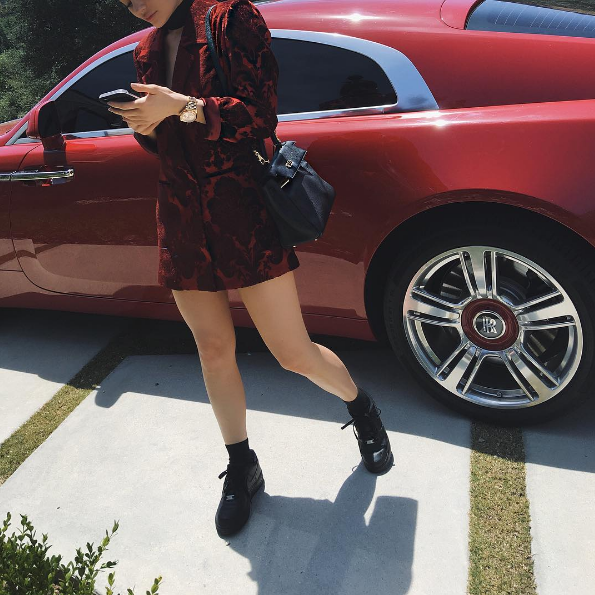 “I had to do it.” That’s what Kylie Jenner wrote in the caption that accompanied this photo of her new Rolls Royce Wraith. That quote could be referencing the fact that her sister, Khloe Kardashian, has also been seen driving a new Wraith, but Kardashian’s Rolls Royce featured a black paint job and chrome grille. So what makes the Rolls Royce Wraith such a desirable vehicle among reality TV stars? Well, first off, its starting MSRP of more than $300,000 ensures that nobody else in the neighborhood will be driving the same car as you; and second, despite a curb weight of more than 5,000 pounds, the Rolls Royce Wraith can rocket from 0 to 60 mph in just 4.3 seconds thanks to its 624-horsepower twin-turbocharged V12 engine. 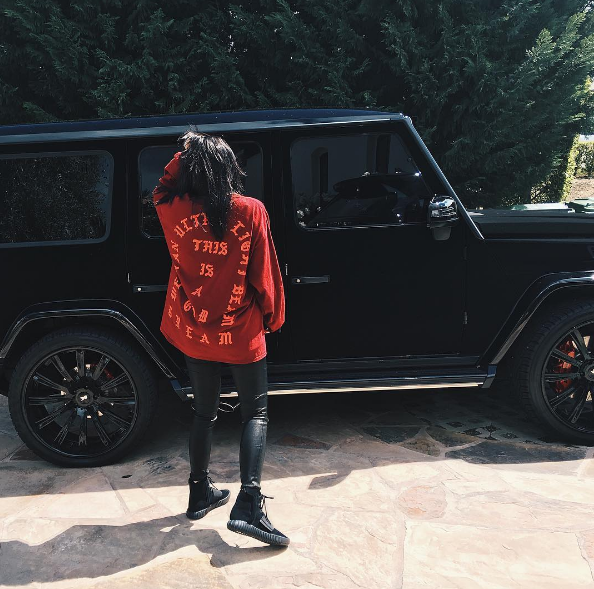 In most cities, the Mercedes-Benz G-Wagen would be the type of vehicle that would make a person’s jaw drop, but it seems like every celebrity in Los Angeles has a G-Class SUV in their driveway. Rap musician Clifford “T.I.” Harris recently bought a green G-Wagen, while YouTube personality Trish Paytas had her G-Wagen painted pink, and comedian Kevin Hart just upgraded to a black Mercedes-AMG G65, which came with a 621-horsepower supercharged V12 engine. It’s a good thing all of these celebrities are cashing fat paychecks because filling a G-Wagen with gasoline doesn’t come cheap. The 2016 G-Class SUV only yields an EPA-estimated 13 mpg in the city and 14 mpg on the highway, so you’ll be stopping at the pumps quite frequently. 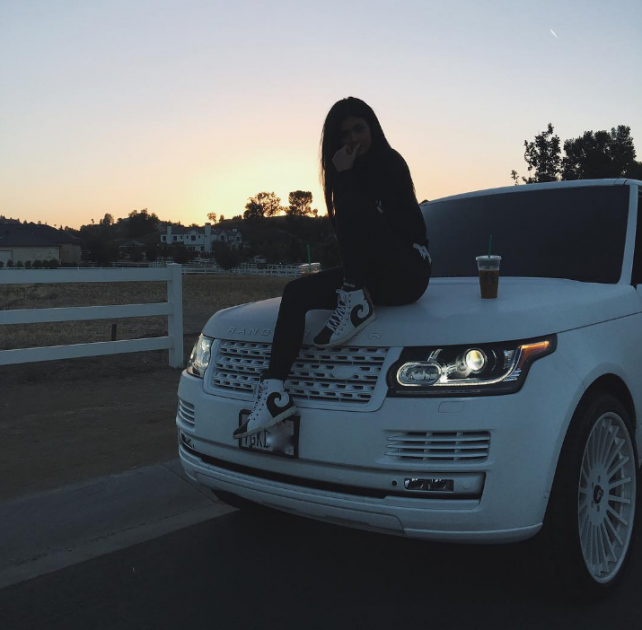 With a price tag well north of $100,000, the Range Rover Autobiography is one of the most luxurious and exclusive SUVs available on the auto market. Underneath its hood, this vehicle features a supercharged 5.0-liter V8 engine that’s rated at 510 horsepower and 461 lb-ft of torque. That powerful motor works with an eight-speed automatic transmission, which helps the Range Rover Autobiography accelerate from 0 to 60 mph in less than five seconds. That type of performance ability is typically seen in smaller sports cars, not a full-size SUV like the Autobiography that features a curb weight of approximately 5,000 pounds. 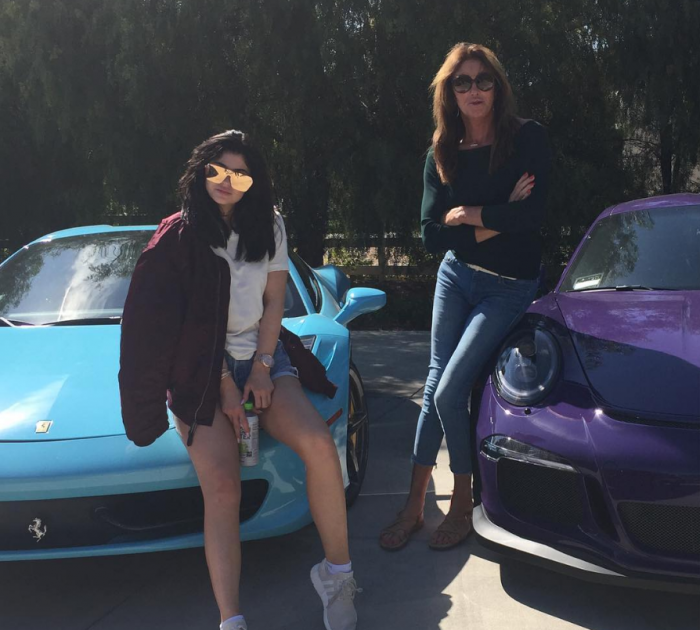 Okay, so this Porsche 911 GT3 RS is not technically from Kylie’s Instagram, nor is it even a part of her personal collection, but it does belong to her father Caitlyn Jenner, who recently posted it to her own Instagram account. Caitlyn selected an eye-catching purple exterior for her GT3 RS, which is a sharp contrast to the bright orange finish that’s featured on NBA star Steph Curry’s Porsche. But, regardless of exterior color preference, both athletes paid a pretty penny for their sports cars as the 2016 Porsche 911 GT3 RS carries a starting MSRP of $175,000.

Does Kyle Drive One? Check out these 5 celebrities who surprisingly own Jeep Wranglers