A Bit About Ohio’s “Scarlet Letter” Plates for DUI Offenders 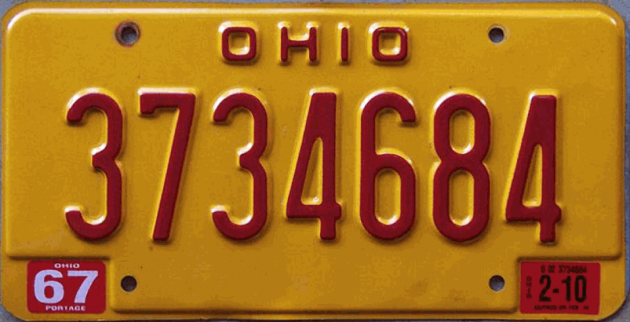 Trending at the tippy-top of Reddit today is a post from r/TIL, entitled TIL drivers in Ohio receive a yellow “scarlet letter” license plate if they have been convicted of a DUI. While the concept of the “scarlet letter” plates may come as a new surprise to some, it’s a 40-year mainstay for Ohioans.

The red-on-yellow license plates have been issued in Ohio since 1967 as a means to publicly identify DUI offenders, but they were only ever issued at the behest of judges. As a result, the plates were somewhat uncommon, until sweeping changes to DUI enforcement in the state made them a mandatory accoutrement on January 1st, 2014.

More Odds and Ends: The Benefits of All-Wheel-Drive Keep on Giving All Year Long

The plates serve the purpose of warning both motorists and law enforcement officers to be more cognizant of drivers with a history of driving under the influence. This is particularly useful given that about one-third of all drunk drivers are repeat offenders. In a story from last June, we detailed the rap sheets of five Ohioans who have been convicted of OVI a staggering 39 times combined.

Opponents of the “scarlet letter” plates (read: primarily those subjected to brandishing the plates), however, feel that individuals are unfairly marginalized or embarrassed because of their easily-recognized status as DUI offenders. This belies the fact that having to carry the plates is an offense simply avoided by choosing not to drink and drive.

It didn’t take long, however, before the mandate was significantly weakened despite the fact that it was quite effective in pointing out the preposterous number of drunk drivers in the state. Between 2003 and 2004, the number of scarlet letter plates issued in Ohio jumped from 1,450 and 10,835 (per Annenberg Classroom).

It was quickly decided that the plates would only become mandatory for second offenses and instances where a driver is twice the legal limit. The plates are generally only carried for the duration of a limited privilege period, which runs between six months to a year.

Are you an Ohio resident looking to avoid having to bear this mark of shame? Our best advice: make sure you have a designated driver and don’t be an idiot.