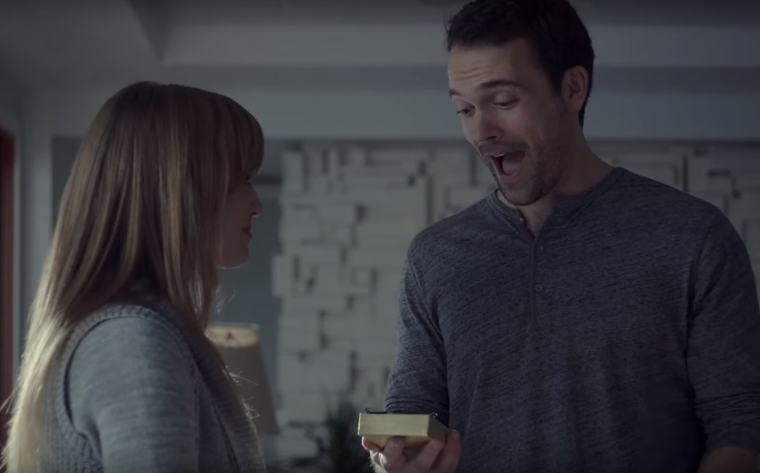 In an article published earlier this month about Acura’s poor November sales, I opined that the luxury brand should follow the lead of its parent company and boost December profits with a holiday-themed sales event, similar to the Happy Honda Days. My casual suggestion was for a Jewish-ish eight-day clearance special called Hanacurah, the Festival of Headlights.

I forgot, of course, that Acura already has its own seasonal sales special—the “Oh What Fun It Is To Drive” event. But I’ve now been reminded of that fact several times the last couple of weeks by a television ad the automaker has been airing for the Acura TLX and MDX, which shamelessly rips off the plot of the classic Bill Murray movie Groundhog Day.

Related info: “Oh What Fun It Is To Drive” Acura sales incentives

The ad begins with a man kissing his wife good morning, and then opening the $35,000 Christmas present she casually hands to him over breakfast: a brand new Acura TLX!

Ecstatic, the man kisses his generous wife and then neglects to ask if she’d like to join him for the first drive. He really takes advantage of the TLX’s performance capabilities on the foggy, snowy streets of his residential area, accelerating along and musing to himself, “I wish this day would never end.”

And because this man has had such a hard life, the fates grant his wish, and he repeats the same day over and over again—much like Bill Murray does in the classic 1993 fantasy-comedy Groundhog Day, in which he plays an arrogant weatherman who repeats the date February 2nd over and over.

So how does this guy break the endless cycle? The same way Bill Murray’s character in Groundhog Day does [SPOILER ALERT]: by learning to care about someone other than himself.

Just as Murray’s unselfish love for Andie MacDowell enables him to finally experience February 3rd, the Acura TLX guy breaks the cycle by waking up before his wife does and then surprising her with the keys to her very own Acura MDX.

Having a plot that’s stolen from a classic American film makes this one of the season’s more annoying holiday car commercials. But hey, at least they didn’t put any damn bows on the cars.