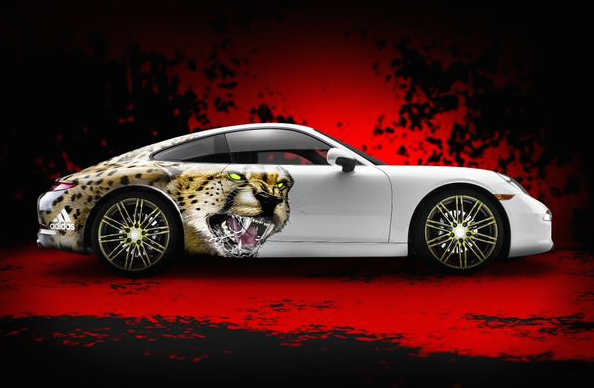 This custom Porsche 911 Carrera could be yours, if you’re fast enough

The NFL season has come to a close, which means it’s time for sports fans to get excited for March Madness and the start of baseball more endless coverage of the NFL. After all, the NFL Scouting Combine is this month, and it’s our duty as Americans to care deeply about amateur athletes running around at a glorified track meet.

So here’s the latest on the Combine: Adidas is giving custom Porsche 911 Carreras to the three fastest NFL prospects. Of course, the folks at Adidas aren’t doing this out of the good of their hearts: athletes have to sign with Adidas prior to running their 40-yard dashes in order to be eligible.

Here’s what the running back hopefuls could win:

The fastest 40 in the lightest cleat ever wins a Porsche® 911® Carrera® sports car. #UNCAGED #PorscheDriving pic.twitter.com/uJaWIpf0nN

Classic case of a great car with a terrible paint job. But they’ve been made to look that way to promote the brand’s Uncaged football cleat, which is supposedly the lightest ever, weighing just 4.7 ounces:

The lightest cleat ever. The adizero 5-Star 40 #UNCAGED. #teamadidas pic.twitter.com/de1olDOYHH

Those Carreras are worth about $83,000 each, which is a serious amount of cash—maybe too serious. When Tom Brady gets taxed $21,500 for a free $34,000 truck, he probably doesn’t sweat the cost. But if a draft pick turns out to be a bust in the NFL (or, despite being fast, isn’t talented enough to be drafted), it might be hard for the player to cover the prize taxes on a sports car worth 83 grand.

Still, sounds like a pretty good deal. Maybe Usain Bolt should consider a trip to the Combine.