Akio Toyoda took over as CEO of Toyota, and as the grandson of the company’s founder, he had some big shoes to fill.  Entering as CEO in the midst of one of the one lowest points in automotive history was not going to be easy, but Toyoda has managed inject a sense of enthusiasm back into Toyota vehicles.

The long-standing tradition of Toyota was to build reliable, safe and last vehicles, but they didn’t turn as many heads as Toyoda would have liked.  Toyoda is beginning to combine that reputation of dependability with enhanced styling, and there is no better indication of that effort than the all-new Corolla.

Recently unveiled in Santa Monica, CA amid a circus-like atmosphere, the 2014 Toyota Corolla is a symbol of Toyota’s new direction.

“Full of surprises and unexpected features, this global reveal event captured the new era and elevated experience of the redesigned Corolla,” said Bill Fay, group vice president and general manager, Toyota Division, in a press release. “As our second best-selling vehicle and a familiar sight on American roadways, the new Corolla retains its trusted quality and reliability while adding an exciting new look and energy.”

The 2014 Corolla is expected to arrive at dealerships this September. What do you think its consumer reception will be like? 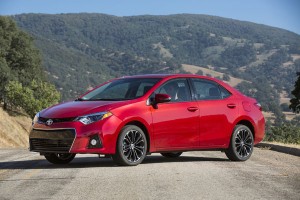