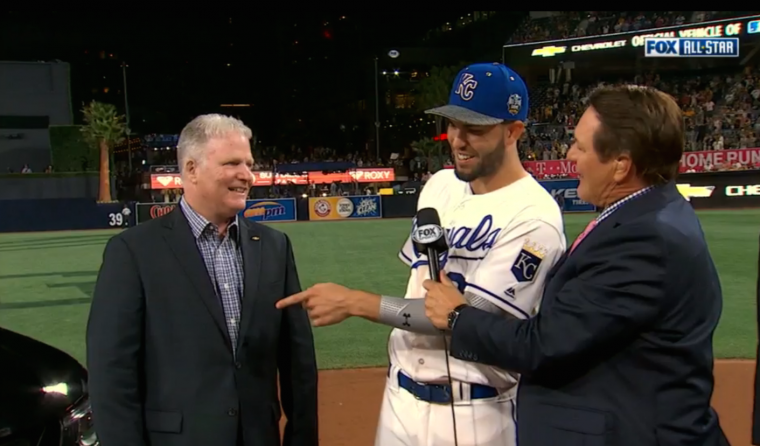 Other than that, there weren’t too many surprises: the American League beat the National League (as it has done in 11 of the last 14 All-Star games), retiring Red Sox DH David Ortiz got a standing ovation, Kris Bryant hit a homer, Jay Bruce struck out on three pitches, etc…

At the end of the night, the only suspense remaining was figuring out whether Hosmer would pick a free Chevrolet Colorado Midnight Edition pickup truck or a 50th Anniversary Edition Chevy Camaro.

“Well I tell you what, pops needs a new truck, so we are going to go with the Midnight Edition,” Hosmer said when choosing the blacked out Colorado Z71.

However, Hosmer seemed to express some buyer’s remorse when the Fox Sports interviewer brought up the idea of giving teammate Salvador Perez a ride in the pickup.

“Yeah, I should have took the Camaro so we could race and see who’s faster,” Hosmer joked in his response.

You can see the full interview and awards presentation below:

During a postgame press conference, though, Hosmer confirmed that the truck would be a gift for his father, telling a reporter it was “so that he can stop stealing all of my cars.”

The selection is something of a repeat from last year’s All-Star Game in Cincinnati, when MVP Mike Trout surprised some by choosing a Chevy Silverado over the all-new Camaro convertible.

Though they may have been disappointed by Hosmer’s choice, Camaro fans still have the opportunity to take home a piece of the coveted special edition Camaro for themselves, which will also double as a piece of baseball history.

Chevrolet is auctioning off a 50th Anniversary Edition Chevrolet Camaro hood that’s been autographed by MLB All-Stars, with all proceeds from the sale going to benefit the MLB-MLBPA Youth Development Foundation. Fans can go to ChevyBaseball.com to bid on the item.