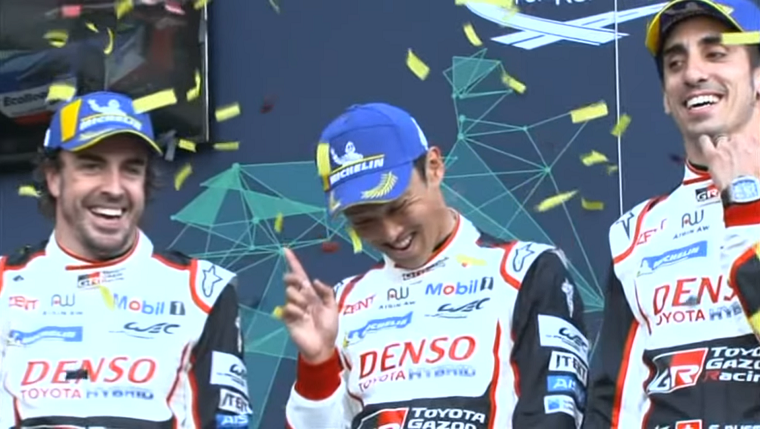 Fernando Alonso and the #8 Toyota TS050 Hybrid were the first to the checkered flag at the 6 Hours of Spa endurance race this Saturday. It was the first time he stood on the top step of a motorsport podium since the 2013 Spanish Grand Prix in Formula One.

Spa marked the two-time world champion’s first official participation in a World Endurance Championship (WEC) endurance race, and the Spaniard must have left the Belgian track feeling like he made the right decision to go to Toyota for the 2018-2019 super season.

Despite having been artificially slowed down by the FIA’s Equivalence of Technology, and despite opposing teams having been helped by the regulations, Toyota’s hybrid LMP1 car was easily the class of the field.

The only car that threatened Alonso’s #8 Toyota and its two other world-class drivers, Sébastian Buemi and Kazuki Nakajima, was the #7 Toyota drivent by Mike Conway, Kamui Kobayashi, and José María López.

Even then, Alonso might not have tasted victory had it not been for team orders. Pascal Vasselon, Toyota’s technical boss, admitted that all six drivers had admitted to not racing each other after the final pit stop.

“We told the drivers they could race only to the last pit stop because we did not want to have the last laps with a lot of tension.”

Though Alonso came out ahead of the last round of pit stops, Conway finished just a second behind and had been running faster until he caught up the #8 car, leading to conspiracy theories that Alonso’s win had been orchestrated.

Alonso, however, will have been happy with his performance at his first WEC outing. His lap times were quick and consistent, though he lost more time to traffic than some of his teammate, which is not surprising considering his inexperience with multi-class racing.

With Le Mans coming up in June and Toyota looking like the team to beat, he may well get that 24 Hours of Le Mans trophy he announced he was hunting last year.