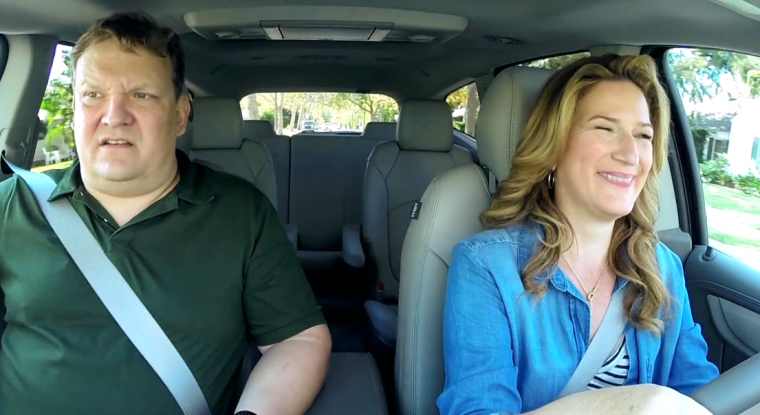 Chevrolet is trying to sell the 2016 Chevy Traverse minivan as the ideal family vehicle, and to do so, it’s enlisted the talents of former Saturday Night Live cast member Ana Gasteyer. The bowtie brand is sponsoring the actress’ Yahoo web series, “Going There,” which features celebrities venting about their children.

The show is very similar to Jerry Seinfeld‘s Acura-sponsored web series “Comedians in Cars Getting Coffee,” except Gasteyer specifically talks to comics and actors who are parents of young children, and the episodes typically involve the guest getting away from the house for a while to run an errand in the Traverse (so a better title might be “Caregivers in Chevys Getting Chores Done”).

So far, most of Gasteyer’s passengers have been fellow moms, but the most recent episode featured (occasionally) proud father of two, Andy Richter, of Conan fame.

Executive produced by Ellen Degeneres, past guests on “Going There” have included Jenna Fischer (Pam from The Office), Jessica St. Clair (Playing House), and Gasteyer’s fellow SNL alum Maya Rudolph, providing an interesting peek into the domestic life of the guy who directed There Will Be Blood.  There are still five installments left to air in the nine-episode run.

“I wanted to do this show because the only thing better than driving around with a friend dishing about parenthood is doing it in a clean vehicle with buttons that still work,” Gasteyer said about the series.

In addition to providing the clean vehicle, Chevy is also sponsoring additional content like bonus videos and articles about parenting opinions, which Yahoo is hosting.

“The Chevrolet Traverse is a midsize SUV tailored to the needs of parents,” said Chevy marketing director Steve Majoros. “This Web series focuses on many of the premier features of the vehicle that were designed with families in mind, while entertaining viewers with some truly universal humor.”