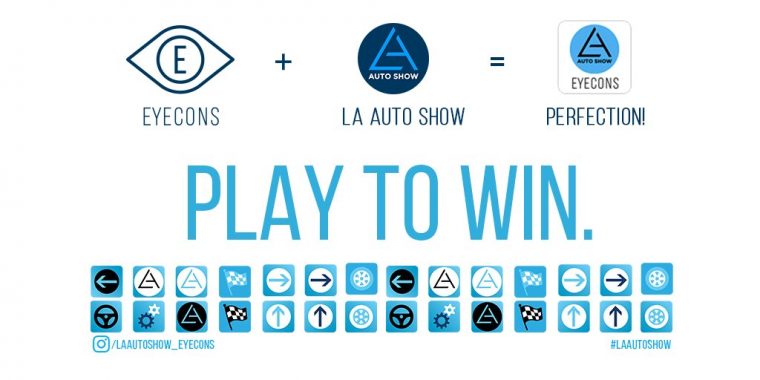 What’s more fun than going to a national automotive show and seeing the latest, greatest vehicles from around the world on display? Not much…but playing a fun mobile game might come close!

The Los Angeles Auto Show has partnered with EyeCons, LLC to create and launch its first-ever digital mobile game to promote the upcoming automotive expo in California. The 2016 LA Auto Show isn’t until November 18th, so in the meantime, fans from across the country can entertain themselves with LA Auto Show Eyecons, a match-two mobile game currently downloadable. 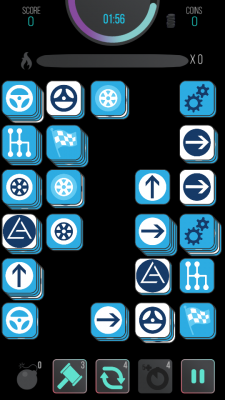 LA Auto Show Eyecons is a variation of the highly-rated mobile game Eyecons–both versions created by Hersch Games, the creators of classic party games like Taboo and Outburst. It’s actually based off a board game of the same name from 1995, also about matching icons.

The original EyeCons, which was released in 2014, is a speed-matching game in which the player must rapidly identify pairs of identical tiles in order to remove them from the screen. By successfully doing so, the player will progress through stages, earning coins to redeem for power-ups before the next round. These include helpful hammers, shuffles, bombs, and extra time, all accessible during gameplay at the bottom of the screen.

The LA Auto Show variant of EyeCons plays exactly the same, except instead of identifying basic shapes like stars, hearts, exclamation points, clouds, and lightning bolts, users of this car-themed edition will be matching designs like tires, checkered flags, steering wheels, gear shifts, and the LA Auto Show’s logo (which, admittedly, is a pretty cool design).

Players can register and create an email-based profile account to share their score on the leaderboard, but the game can still be played without registering or having an internet connection if you so choose. However, if you want to be on the mailing list to receive information on prize giveaways leading up to the auto show, you’ll need a registered account.

The game does offer optional in-app purchases for more coins, but those (along with the sound and music) can be turned off on the settings screen of the home menu.

Learning how to play EyeCons is really easy. There’s a walk-through and a step-by-step instruction guide on how to play the game on the main menu (look for the question mark button), but the game also guides you through a tutorial with explanations during the first stage. If you’ve ever played a basic, touch-based game like this, you’ll catch on within the first round. Your score and remaining time are all displayed along the top of the screen.

Navigating the game’s menus is also simple to master; all of the button icons make sense and are large enough to be clearly visible.

For what it is, LA Auto Show Eyecons is an attractive game without being overwhelmingly, unnecessarily overproduced. The visual style of the game is not only stylishly appealing, it’s simple, streamlined, and won’t hurt your eyes. The use of the black background and subdued teal icons won’t burn your eyes out–unlike other similar games do.

The soundtrack is funky, electronic groove music heavy on digital drums and synth. It’s a repetitive hook, but it’s not necessary while playing, so you can turn down the volume or mute it completely via the setting screen. 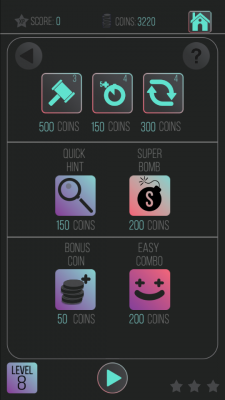 I’m not one to play games on my smartphone (a Samsung Galaxy S4 Mini); the most I’ve downloaded is Flow Free, which I rarely play. But, the LA Auto Show’s involvement in releasing this uniquely-themed promotional app caught my attention. After easily downloading the app from the Google Play store, I was immediately playing.

There’s a two-minute timer on each round, which is fast enough to be challenging without being overwhelming or too generous. There’s a total of 30 rounds–increasing in difficulty and subtle variations in icon designs)–and I’ve made it through a third of them since yesterday. So at that rate, it won’t be long until I finish playing it.

I found the app to be a generally responsive touch interface with crisp sound quality. I especially like that it pauses automatically if you leave the app so you can resume where you left off. It does drain a good amount of battery power, so be conscious of when you can play it.

While not enough of the LA Auto Show version have been downloaded and rated to generate an average rating on Google Play, the original EyeCons holds a 4.7/5.0 rating–and I think that’s a fair score. While it’s not a revolutionary matching game among the numerous others on the market, it’s simple to learn and easy to use, making it a welcome diversion while you wait for the actual auto show to roll around.

LA Auto Show Eyecons is available for free through the Google Play and iTunes App Stores.