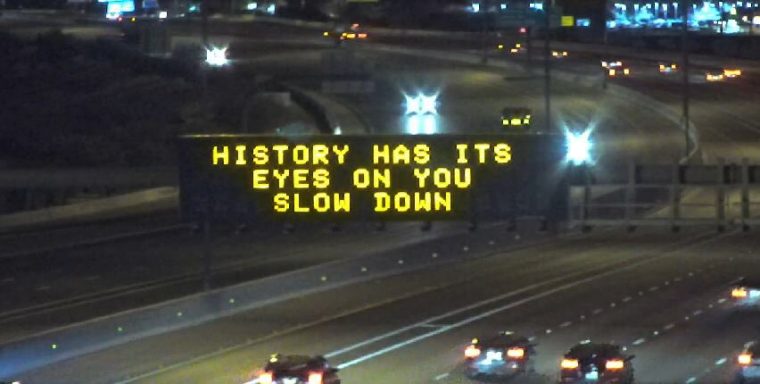 If you have even a passing interest in Broadway musicals, you know about Lin Manuel Miranda’s blockbuster Hamilton. This modern take on the Founding Fathers and the birth of our nation has filled seats in the Richard Rodgers Theater in NYC since it started, with the following locations and tour dates selling out as fast as tickets go on sale. Right now the touring company of Hamilton is at Arizona State University’s Gammage Auditorium, and the Arizona Department of Transportation decided to get in on the fun with their digital road signs.

So far, four signs bearing Hamilton song lyrics have popped up on the highways. All of them take original words written by Lin-Manuel Miranda and retool them to apply to drivers.  Officials used “Tell the Story of Tonight,” both a lyric and name of a song, and added “Designate a Driver” on the next line of text. Aaron Burr’s “Talk Less, Smile More” was transformed into “Talk Less, Drive More” to try and deter distracted driving.  Two more lyrics were used to encourage drivers to slow down, with “History Has Its Eyes On You” adding “Slow Down” and “Why do you write like you’re running out of time?” becoming “Why Do U Drive Like UR Running Out Of Time?”

This isn’t the first time that transportation officials have tried to be cool. There are routinely Star Wars-related signs when a new movie in the franchise is released, and several signs about safe driving are loaded with puns. At least we know that when we don’t make it online fast enough to get Hamilton tickets in a city near us, we might still get to be part of the fun when driving down the highway.

We’ll be waiting for decades.