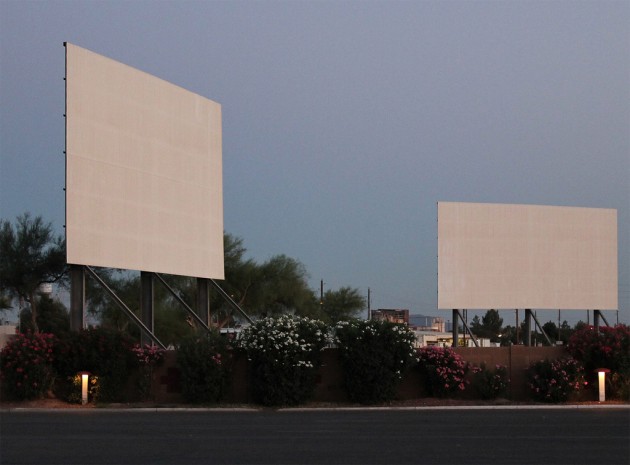 Two of the Nine screens at the Glendale 9
Photo: Michael Kilgore

Arizona was once a booming capital for the drive-in movie business. At its peak, the state boasted nearly 50 drive-in theaters in the 1950s. That number sank to just four in the early 2000s, and in present day, starlit movie screens have been whittled down to just one.

The Glendale 9 marks the last surviving drive-in theater for the state of Arizona. Owned by West Wind All Digital Drive-Ins, the Glendale drive-in is one of seven drive-in locations owned by the company, including four in California and two in Nevada.

Unlike many solo or double-screen operations, the Glendale 9 has them all beat… with 9 screens showing double features year-round. Movie buffs are pulled in for repeat business due to the wide movie selections, well-maintained theater atmosphere, and the fact that it operates as a public market and swap meet by day.

You could call this the gentrification of drive-in movies, but for Glendale, the market-by-day, theater-by-night double life is working. The customers that show up to purchase fresh produce, clothing, and home goods each day are easily reminded to keep the theater in mind for nightly entertainment.

The projection system at the Glendale Drive-In was updated in 2013 to deliver crisp digital picture, and reviewers at tripadvisor say that the sound quality is pretty good, too. There is a full-service snack bar to cure the munchies during nightly viewings, and guests are welcome to bring in their own eats.

If you’re looking for a traditional American night out with the family, or maybe just some thrift-shopping, a trip to the Glendale Drive-In may be in order this summer.