If there is indeed a divine creator, this would indicate that he/she has some sense of humor. Of course, it also involved a traffic accident, so it also indicates a rather twisted sense of humor. 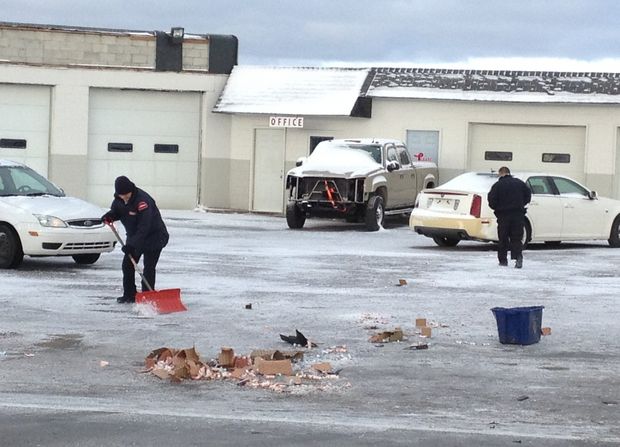 Money doesn’t grow on trees. Nor does it simply fall from the sky. However, if you live in Flint, Michigan and happened to be traveling out on the Vienna Township roadway this past Tuesday around 7am, you may have reason to believe that money grows out of the road. That’s because a Loomis transport armored van headed northbound lost control on an icy stretch of road, crossed into southbound traffic, struck a GMC Sonoma, did a 180-degree turn, and came to rest in a parking lot.

Fortunately, no one appears to have been seriously hurt, despite the fact that the end result of the accident looked to be pretty gnarly. No citations were issued at the scene of the accident, but authorities say the investigation is ongoing. What we can say, however, is that the smash-up resulted in a whole bunch of money lying on Saginaw Road and the shoulder. According to MLive, extra crews from the armored van company were called in to sweep up the money and take it away before people got any crazy ideas.

The armored van was said to be carrying $1 million dollars at the time of the accident. From the photos provided by Gary Ridley, it appears that mostly coins found their way onto the ground. Then again, it’s entirely possible that the gentleman called out to help sweep up the scrilla may have just been clever thieves in Loomis jumpsuits. It’d be like Ocean’s 12, except only way less convoluted and pretty.

Count me among the many hoping that there are no more icy roadways to speak of in 2014 (or ever again that matter, I don’t even care if the ice caps melt at this point). But if slick highways could potentially result in injury-free armored van crashes that lead to an easy payday, I might be willing to tolerate just another week of icy madness.