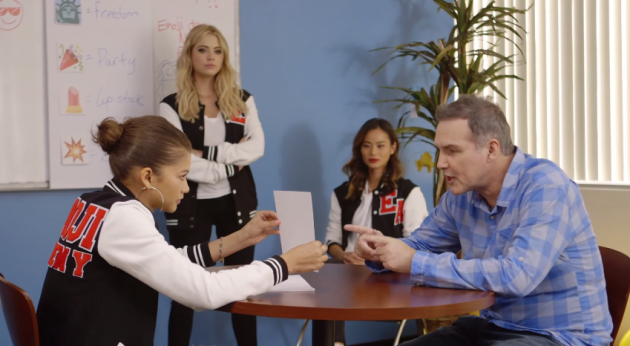 Yesterday, Chevrolet released a #Millennialtastic press release for the upcoming 2016 Cruze that was—get this, youngsters—composed entirely of emojis!

The whole thing seemed like a bit of desperate pandering, but it makes a little bit more sense in the context of this new series of videos (below) that Chevy posted to YouTube.

In the first one, former Saturday Night Live star and current middle-aged man Norm Macdonald  receives the bewildering #ChevyGoesEmoji press release on his phone. In order to decode it, he heads to Emoji Academy.

Like a squadron of modern-day Navajo code talkers, the professors of Emoji Academy—Pretty Little Liars star Ashley Benson, Sucker Punch actress Jamie Chung, and Disney Channel star Zendaya—can translate #EmojiSpeak with ease, and are more than up to the task of teaching Norm the language:

In Emoji Academy Part 2, the girls put Norm through his paces, with flashcards, complicated emoji theorems, smiley face pillows and beach balls, and some mild aerobics:

At the end of the video, Norm recognizes the signature Chevy bowtie logo, proving to Ashley that he’s “ready for [his] final test.”

And then… that’s it. We’re still waiting for the big revelation that’s sure to come in Emoji Academy Part 3, which will probably coincide with the 2:00pm release of the “decoded” #ChevyGoesEmoji press release.

We’ll provide you with updates on this very, very important topic as they come in.