April Fools’ Day: Audi’s quattro Sushi is a Thing That I Wish Was Real

The idea of Audi-branded sushi is not nearly as revolting as one might think it would be. After all, even when sushi is bad, it's still pretty good. 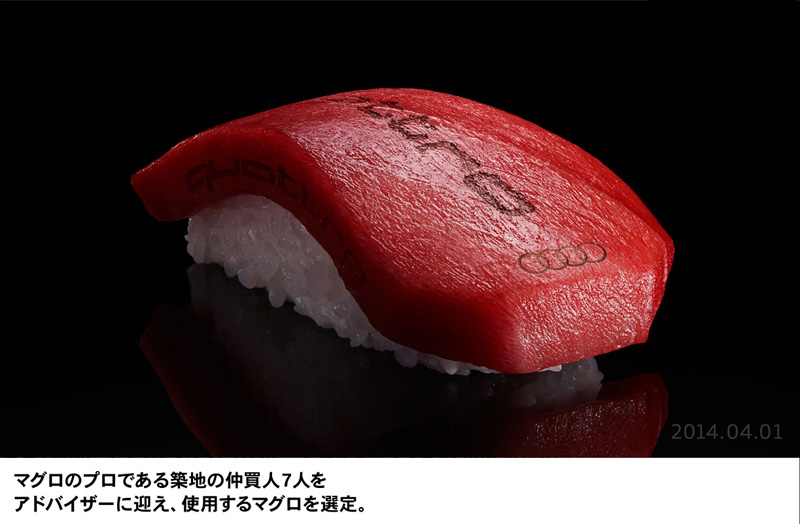 Sushi is delicious. That’s something that we can just get out there in the open straight away. That was why it was particularly exciting to see this morning that Audi, manufacturers of some of the world’s most sumptuous luxury vehicles, will open a quattro® sushi restaurant in Tokyo.

Audi’s page for the quattro sushi chain (originally in Japanese) mentions that the product served at the restaurants will rely on a design philosophy similar to that which has made Audi’s vehicles among the world’s most beloved. The images of the sushi presented by Audi resemble the sleek and sexy profiles of their sports car. There even images of quattro sushi replicating the infamous Audi A6 ski ramp jump from 2005.

Given sushi’s newly won status as an UNESCO Intangible Cultural Heritage and Audi’s status as a cultural icon, the harmonious marriage seems all too logical.

If it doesn’t actually seem all too logical, that’s because this is Audi’s idea of an April Fools’ Day yarn. At the bottom of the page, you’ll find the following: ※この記事はエイプリルフールの嘘のニュースです. This translates roughly to “This article is news of the lie of April Fools’ Day.” Like I said, roughly.

I’d be lying, however, if I said that the idea of Audi-branded sushi didn’t sound appealing at all. Hell, it’s incredibly difficult to make sushi sound anything less than delicious, and if the same kind of craftsmanship that goes into Audi’s cars is applied to making my Eel and Avocado Roll, I’m not gonna knock it even if it’s branded inexplicably with Audi’s four ring emblem.

How about you? Would you nom on some quattro sushi?