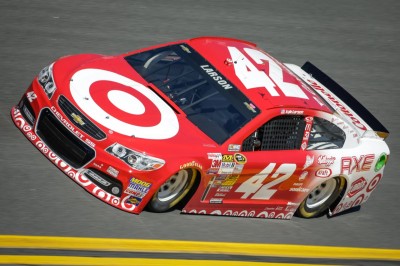 At this past weekend’s Auto Club 400 at Fontana, Kyle Busch won after much of the field was hampered by tire failures, staving off the furious final-lap charge of Chevrolet’s Kyle Larson and passing his brother Kurt and Tony Stewart along the way.

After a Lap 205 restart, Kyle Busch was the first driver out of the gate with four fresh tires, allowing him to charge past Stewart and his brother on the way to victory. Rookie Kyle Larson and the No. 42 Chevrolet SS did their due best to earn the win, crossing the finish line a mere .214 seconds behind Busch.

During the Auto Club 400, four yellow flags were flown after drivers’ tires blew out as a result of the track’s less-than-ideal conditions. Several other drivers also lost tires to the borderline hazardous asphalt in Fontana, which hasn’t been repaved since 1997.

In fact, Busch himself attributed his victory to a blowout suffered during a practice run the day prior to the race, which led his team to take a more cautious approach in order to keep the tires intact.

“We were lucky, we had our tire problem with two minutes to go in practice yesterday, and that allowed us to go into a conservative approach overnight,” Busch said. “I’m glad that we had that. Sometimes it’s a blessing in disguise to blow a tire and to not pay a penalty by spinning and wrecking your primary car.”

While neither Larson nor Kurt Busch were able to take first from Kyle Busch, Team Chevrolet took six of the top ten positions and increased its lead in the manufacturers’ standings.