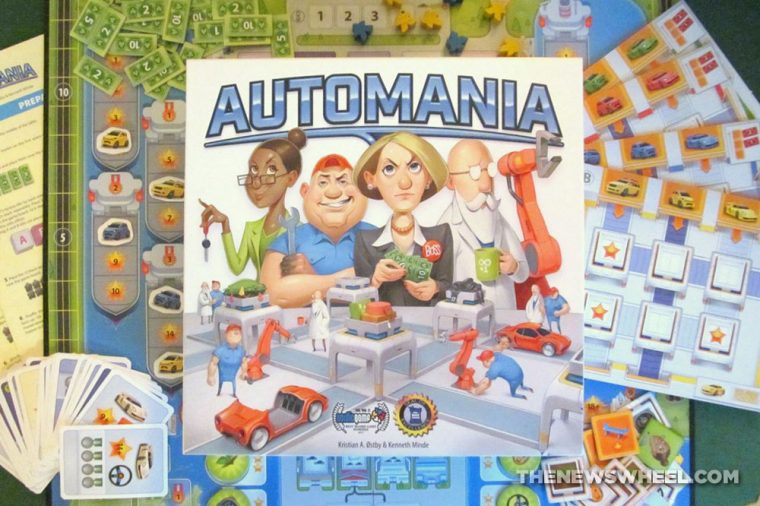 Every year, new board games are released that turn any conceivable subject into a competitive challenge simulated with cards, boards, dice, and meeples. I’m a big fan of tabletop gaming and have taken a look at many different car-themed titles during my time with The News Wheel.  I particularly enjoy strategic “worker placement” games that challenge players to prioritize their actions to achieve a long-term goal.

I’m also a fan of game designer Kristian Amundsen Østby’s work–Escape: The Curse of the Temple being one of my all-time favorite games–so when I heard he was producing a second, wider release of his Automania, I knew I had to try it out. I had the pleasure of receiving a copy of Automania and this automotive factory-themed adventure did not disappoint.

Looking to Expand Your Game Library? We count down the best car-themed games of all time 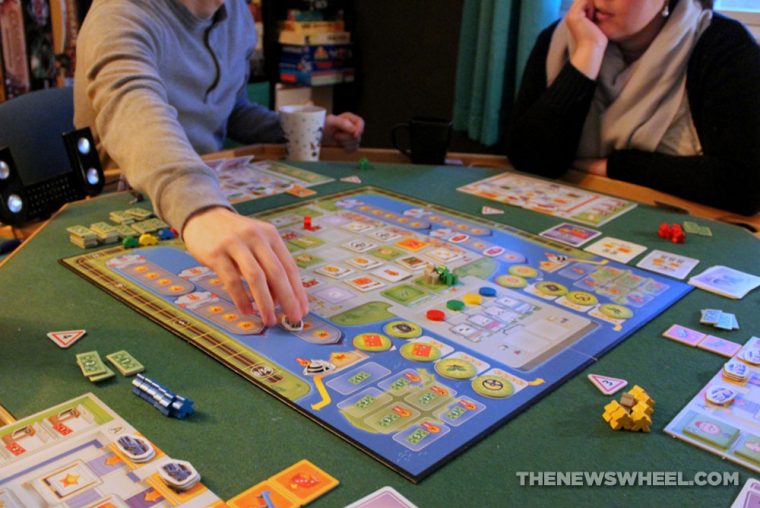 How to Play Automania

In Automania, each player operates their own factory that produces three different types of cars: economy, family, and sports cars. Players can enhance the quality of the vehicles they produce by obtaining tiles from the shared center game board and adding said tiles to their individual factory boards. Each tile offers a different improvement: characteristics such as handling or cargo space, styling aspects like a spoiler, or managers that offer action benefits. 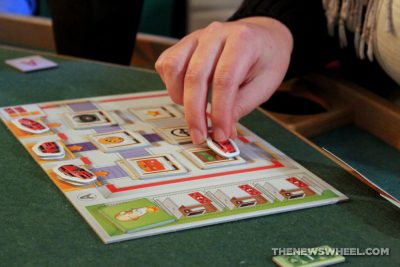 By adding such improvements to the vehicles a player produces, the popularity score of the car increases, which gives higher value vehicles better benefits when selling their cars.

The game is played in three rounds in which players take turns placing their worker tokens on the game board to obtain tiles and produce cars. Built cars are placed on export ships until the end of the round. Once every player can no longer lay a worker token and has retired to the sales office, the exported cars are sold in order of popularity and scored for victory points and money.

After three rounds, the player with the most victory points wins.

The copy I received was a second edition printing of Automania. According to Østby, changes from the first edition include the box cover color, title font, factory board colors, and tweaks to payouts and selling options to balance gameplay.

The quality of Automania‘s components is fairly solid. Upon opening the box, there were problems with the perforation on the tiles and factory boards, causing some of the items to tear, but they were easily glueable. The cardboard tiles are thick and the boards are hefty, so it doesn’t feel like they’ll be damaged during use or storage. Speaking of storage, the box doesn’t contain any dividers but makes up for it with a roll of plastic baggies.

The art design by Gjermund Bohne may surprise some people–such as myself–who expect industrial production games to have a realistic, dark, lusterless aesthetic. While it took me some time to get used to the more fantasized, cartoony shapes and glossy colors of Automania, I eventually found its aesthetic to be unexpectedly charming and buoyant, which was a nice change from all the “hard-edged” car-themed games out there. 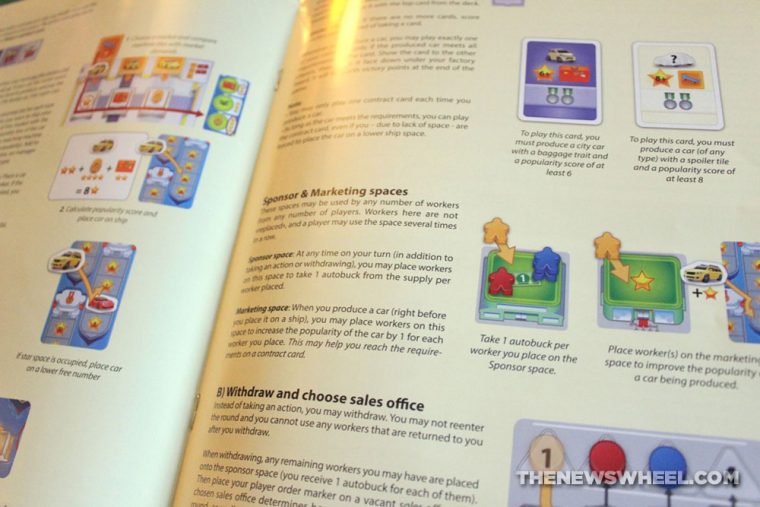 I admittedly did have some trouble understanding Automania the first time I read through the directions; it’s not the most organized set of instructions I’ve read. For instance, it mentioned things before they were defined later. It does have a few minor typos too, like referring to some pieces as black when they’re actually light grey. It could’ve used more detailed diagrams of certain areas or pieces being referred to, as well as a more thorough glossary of what some basic terms and icons mean.

Luckily, most of the hazy parts can be figured out if you read through the directions beforehand. Once you grasp how the game works, teaching it isn’t too difficult. The first round will be a challenging learning curve for other players, but by the second round, they’ll have picked up on a strategy. 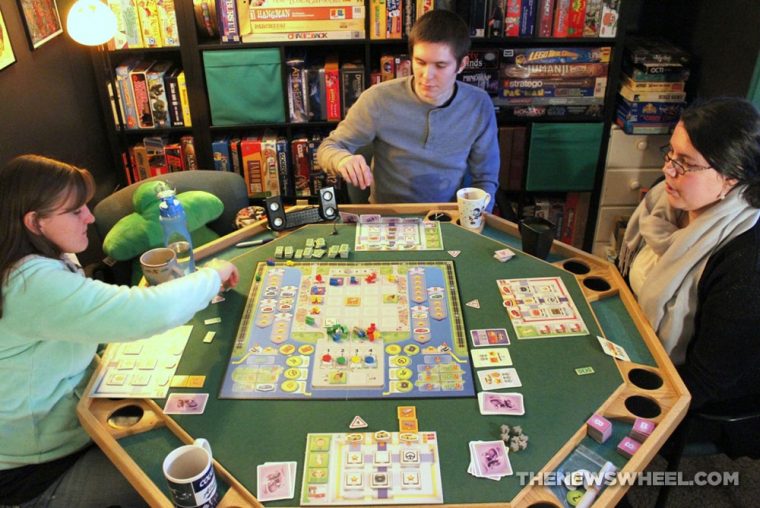 Sitting down and playing Automania is where it shines. I tested the game on multiple occasions with a mix of people who were interested in cars and were not. The results on all occasions were similar: everyone had good things to say about Automania.

On one hand, it does have a strong appeal to car enthusiasts, incorporating aspects of the industry that are relevant to vehicle production, such as eco-friendliness, safety, handling, and model class. Using a race track to keep track of scores was particularly clever. But the theme won’t discourage those who just enjoy playing a calculating, engrossing game. 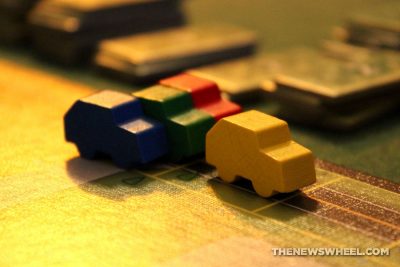 Automania‘s main appeal is how well-balanced it is, harmonizing each players’ advantages and disadvantages by tweaking the gameplay each round with varying turn order, constraints, and goals. It empowers players with the ability to choose their path without being overwhelmed by decisions in every step of the game–there’s a clear progression in round and turn sequence to take it in steps. Each person is given opportunities to sacrifice for a short-term boost payout versus holding out for long-term solutions.

I particularly liked how superseding a rival player’s worker token placement returns those tokens back to the rival player, keeping them in the game longer. It forces you to weigh the importance of what you’re trying to achieve and its potential benefit to your competitors. The factory boards are also well-designed, nuanced in their “double-dipping” layout and double-sided to offer higher-challenge variance.

Our final scores were typically quite tight, with there being less than 10 points between the first- and fourth-place players (in a 60-70 point game). While it does accommodate two or three players, I strongly recommend playing with four; the presence of four players makes the game more competitive as there are fewer tiles and fewer export spaces to go around.

Automania deftly combines an oft-dry theme with well-balanced, mid-weight production strategy to yield an enjoyable experience that you’ll want to play again the moment the final scores are tallied–car enthusiast or not.

Automania can be purchased through Amazon and other online retailers.

Product provided for review by publisher/distributor.