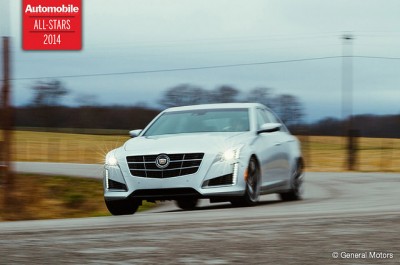 Automobile Magazine has released its list of 10 All-Stars for 2014. Quite possibly our favorite to make the cut was the 2014 Cadillac CTS, which was even in the running for the magazine’s coveted 2014 Automobile of the Year Award. (That award ended up going to Cadillac’s sister company’s highly successful Corvette Stingray because, well, the Stingray won pretty much everything this year.)

All vehicles on sale for the 2014 model year were considered for this award that only ten cars eventually earned, among them the CTS. The CTS All-Star distinction marks the seventh time that a Caddy has earned the honor.

“During our All-Stars evaluation drives, the Cadillac CTS emerged as a clear favorite,” said Editor-in-Chief, Jean Jennings. “Previous generations of the CTS had come close to equaling the performance, styling, and outright desirability of the most highly regarded foreign luxury sports sedans, but not quite.”

She added, “This all-new CTS, on the other hand, actually surpasses many of its competitors from Europe and Japan and, in so doing, is a testament to the complete transformation of Cadillac. We are happy to recognize the brand’s success and to celebrate this highly compelling luxury car.”

David Leone, CTS executive chief engineer, commented, “The CTS continues to be Cadillac’s centerpiece, helping to continue the elevation and evolution of the brand. CTS has directly challenged the luxury midsize competition with uncompromised performance, luxury and technology and come out on top, as shown by this accolade.”

Other winners included the following: