Dreams of a Free DeLorean One Game Away from Elimination 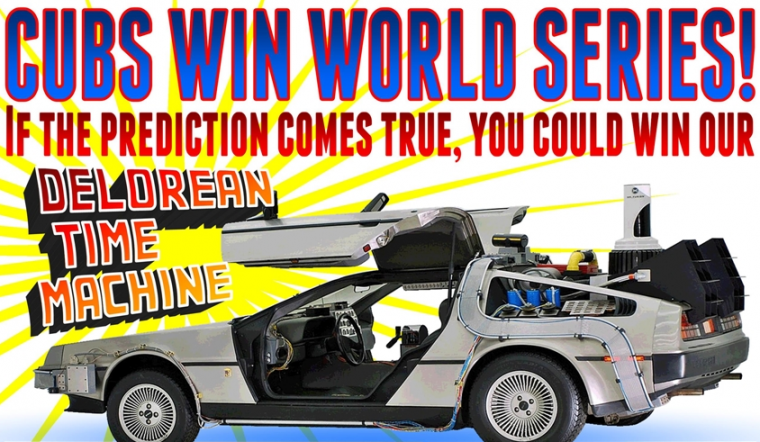 As you’ve probably heard, today is “ack to the Future Day, the exact date—October 21, 2015—that Marty and Doc Brown time-traveled to in the 1989 sci-fi adventure comedy Back to the Future Part II.

What you may not know is that back in March of this year, right before the start of the 2015 Major League Baseball season, the Volo Auto Museum in Illinois promised to give away a free DeLorean if the Chicago Cubs actually won their first World Series since 1908, as depicted in the movie:

Fans can enter the contest by visiting the museum, although it may soon be a moot point.

Having finished last in the challenging National League Central division in 2014, the Cubs seemed like a long shot to win a title this year. But led by a new crop of talented young rookie sluggers like Kris Bryant and Kyle Schwarber (both of whom are younger than every movie in the BTTF franchise itself), the Cubs not only made the playoffs, but shutout the Pittsburgh Pirates in the one-game Wild Card round, and then upset the first place St. Louis Cardinals in the National League Division Series.

Now the only thing keeping the Cubbies from going to their first World Series since 1945 is the New York Mets, who the Cubs dominated during the regular season, with a 7-0 record against.

Yet the Mets are currently leading Chicago three games to none in the seven-game National League Championship Series, with a chance to eliminate them in tonight’s Game 4 at Wrigley Field. That means, of course, that your hopes of winning a free DeLorean are also just one game away from elimination.

So if you’re a Back to the Future fan (or just someone who wants to win a free DeLorean), root for the Cubbies tonight. Considering that flying cars aren’t in our near future and that so-called hoverboard from Lexus isn’t actually much of a hoverboard, it would be nice if at least one of the movie’s predictions about the year 2015 came true.