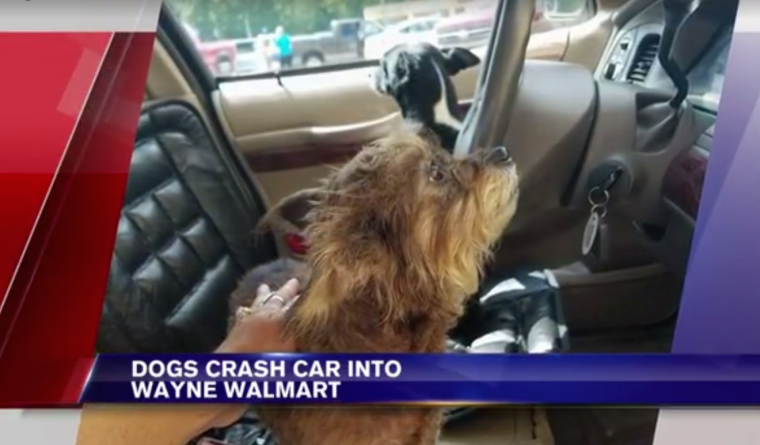 One has to imagine that a very, very large rolled-up newspaper awaits the very, very bad dog in Wayne, West Virginia, who managed to drive his master’s car straight into a Walmart.

That’s the kind of bad dog behavior that goes beyond simple carpet-wetting or mailman-harassing.

Not to mention, he didn’t even wear his seat belt!

According to witnesses, two dogs left in a parked car outside of a Walmart store somehow managed to drive the vehicle straight into the side of the building.

You really have to feel for the pets’ owner, reportedly a woman in her late seventies, who was shopping inside the store when the crash occurred. Apparently she left the car and the air conditioning on so that her animals wouldn’t overheat, which is a very good and responsible idea!

Unfortunately, she didn’t count on one of her dogs accidentally (?) shifting the car into drive (or think to lock the emergency break, I guess).

As usual, the best part of the local news video documenting the story is the eyewitness reports. Especially the guy who speculates that this could be the first stage in a series of evolutionary steps for the canine species.

“Next thing, you’ll be seeing them shopping, or something,” hypothesizes one local.

There’s also some quality musings on the duality of dogs.

“Dogs can be your best friend, and in this situation, they can be your enemy, too,” says Ryan Estep.

If Walmart is looking to sue the driver for damage done to the store, I think I know a lawyer who would take the case: