Behind the Badge: The History & Future of Vauxhall’s Griffin Emblem

What is this curious entity on the Vauxhall badge?
Photo: Jon Large via cc/Flickr

Being that it’s a European brand, those of us in the United States don’t often keep tabs on Vauxhall, but in the wake of General Motors’ sale of Vauxhall and Opel to the PSA Group, the Vauxhall badge has been flashed across the news more prominently. Thus, you may have seen the Vauxhall logo recently and not known what it was or how it pertained to the company’s name.

Cream of the Crop: Information on the most popular used SUVs in the country

Discovering the Meaning Behind the Vauxhall Logo & Name

As one of the oldest established vehicle manufacturers and distribution companies in the UK, Vauxhall has been around for much longer than you’d think. Alexander Wilson founded the company in the Vauxhall district of London in 1857. It was originally named Vauxhall Iron Works before settling on its current name. Vauxhall designed its original logo when it was founded in 1857; as a nod to its local heritage, Vauxhall chose the image of a griffin driving a “V” flag into the ground. After its founder left the company and it began producing cars, the name and logo were retained to pay homage to its roots.

The griffin, a mythical creature with the body of a lion and the head/wings of an eagle, reflects the coat of arms of Sir Falkes de Breauté, a mercenary soldier who was given the Manor of Luton by King John in the thirteenth century. His mansion, Fulk’s Hall, became known eventually as Vauxhall.

The logo underwent changes over the years, streamlining details and going from square to round.

Evolution of the Vauxhall logo over the years

In 2008, Vauxhall released its most up-to-date logo design, cropping out most of the animal’s body to focus on its head. Concerning the design, Vauxhall’s Managing Director Bill Parfitt stated, “While the new-look Griffin pays homage to our 100 year-plus manufacturing heritage in the UK, it also encapsulates Vauxhall’s fresh design philosophy, first showcased in the current Astra, and set to continue with Insignia.” 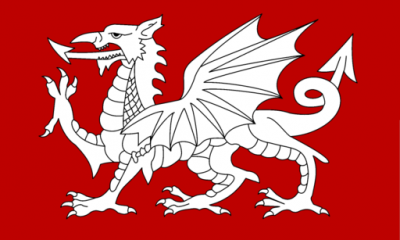 A wyvern (dragon) on the White Dragon Flag
Photo: Wikimedia

There’s actually an ongoing argument concerning whether the animal is–rather–a wyvern. Some historians and representatives claim that the animal is–or at some point–was actually a wyvern, a mythical dragon with legs and a tail. Its barbed head does bear similarities to the feathered eagle head, and features horn-like ears, but the consensus by and large is that the Vauxhall creature is a griffin.

Now, with the sale of Vauxhall to the PSA Group, the big question is–will the Vauxhall logo be revamped to usher in this new chapter in the company’s history? While there hasn’t been official word on this yet (as of today, March 13th), it will depend on if the PSA Group wants to sustain the brand’s current image without drawing attention to the change in ownership, or if a noticeable makeover would be welcomed. Considering the 2008 makeover was made to improve perception of the brand, an upcoming redesign wouldn’t be a surprise.

Enjoy reading about logos like Vauxhall’s? Check out the rest of our Behind the Badge series examining fascinating automotive emblems!

Keep on Truckin’: What are the most popular trucks in America?