Behind the Badge: The Mysterious Origin of Chevy’s Iconic Bowtie

Where did the Chevy emblem get its inspiration and meaning? Find out!

In the world of automotive branding, there are boring logos…there are lazy text-based logos…there are run-of-the-mill logos…there are complex logos…and then there’s the Chevrolet bowtie. For a hundred years, this symbol of American automotive ingenuity has remained unparalleled in brand identity around the globe. Arguably, it’s the best out there.

Everyone agrees that the iconic Chevy logo was first introduced by the company’s co-founder William Durant in 1913, but do you know where he got the idea for it? Discover the origin and history of the Chevrolet bowtie emblem by reading on!

Related: Check out these brochures on the latest car models

Multiple Theories on the Inspiration for the Chevrolet Emblem

Chevrolet’s bowtie emblem is a wide, stylized cross in a metallic color–simple but completely original…or is it?

Over the years, multiple explanations of where Durant came up with the idea for the logo have circulated. The most predominantly accepted–and the explanation confirmed by Durant and the Chevy company–origin is that it was inspired by the wallpaper design within a Paris hotel.

According to a 1961 publication by the automaker, “It originated in Durant’s imagination when, as a world traveler in 1908, he saw the pattern marching off into infinity as a design on wallpaper in a French hotel. He tore off a piece of the wallpaper and kept it to show friends, with the thought that it would make a good nameplate for a car.”

However, Durant’s own family disagrees with that explanation. According to his daughter, Durant sketched the image at the dinner table in 1929, as he was known to doodle designs frequently.

A third explanation which his wife offered was that Durant was the design in a Virginia newspaper ad while they were on vacation in 1912. This explanation does seem to withstand scrutiny, as a historian later uncovered an old newspaper ad for “Coalettes” that features a logo nearly identical to Chevrolet’s bowtie.

Then, there’s even a fourth theory that the logo was dedicated to Louis Chevrolet’s Swiss heritage–the bowtie emblem paying homage to the Swiss cross.

By now, we’ve accepted that we might never know the true origin of the Chevrolet bowtie–but regardless, the world still appreciates it and the hundreds of millions of vehicles it has adorned. The badge’s iconic gold color will always remain fashionable and stylish, enthusiastic yet confidently sporty. You can learn more about the history of the bowtie in Chevy’s official 100-year anniversary infographic below.

Enjoy learning about the Chevrolet logo? Check out the rest of The News Wheel’s “Behind the Badge” series to learn about other auto brands! 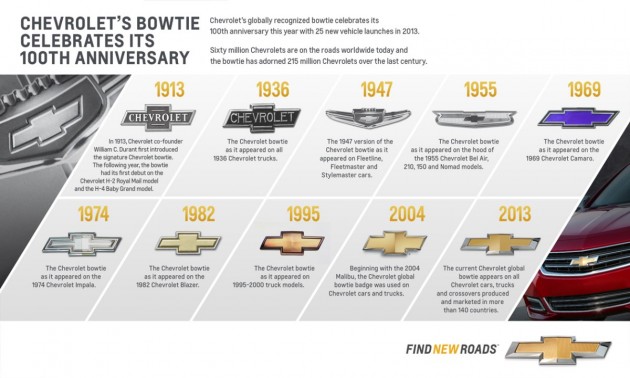