Where does this fierce logo and name originate?

If there’s one moniker that stirs excitement in gearheads, it’s Dodge’s Hellcat. These supercharged variants of Dodge’s most popular models make the American legends into even more powerful vehicles with their beastly engines.

Monstrous machines deserve aggressive titles and identities–which Dodge delivered with its fierce Hellcat emblem. But have you wondered where the Hellcat name and logo came from?

Is Your Car Unimpressive? Here’s the first thing you should do to improve it

Discovering the Meaning Behind the Hellcat Emblem & Name

The term “Hellcat,” as Dodge uses it, derives from the American Grumman F6F Hellcat fighter aircraft of World War II; it functioned as our Navy’s main fighter in the second half of the Pacific War. Dodge has a history of re-purposing military terms for its vehicles, so this comes as no surprise. This name was chosen above the other finalist suggestion, “Alley Cat.”

But what does the term “hellcat” actually mean? 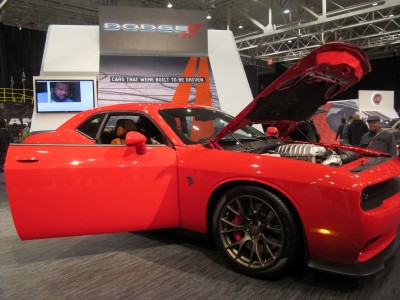 According to the Merriam-Webster Dictionary, a hellcat is a 1) witch or a 2) “a violently temperamental person, especially an ill-tempered woman.” It originated around 1600 by combining the component terms “hell” and “cat.” So yes, that is one mean lady you’re driving–an appropriate title considering how bitchin’ that ride is.

“It just fits the car. It fits the engine and the sound of it,” once stated director of Dodge and SRT Richard Cox. “This one just had so much strength behind it.”

The Hellcat logo fittingly matches this fierce attitude, designed as a stylized cat’s head baring its teeth, narrowing its eyes, and pulling its ears back in an aggressive pose of threatened violence. The mix of grey lines and black background emphasize the knife-sharp angles and line points on the face. Its ears almost even look like horns.

Clearly there wasn’t a more fitting name or logo out there for SRT’s supercharged 6.2-liter V8.

Love reading about logos like the Hellcat’s? Check out the rest of our Behind the Badge series examining fascinating automotive logos!

Even Great Cars Have Needs: Advice for maintaining your car’s fluids