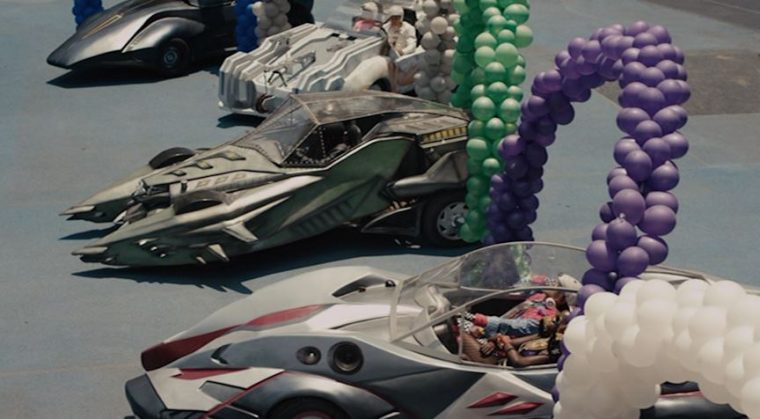 At its core, Roger Corman’s Death Race 2050 is a film about duality.

It addresses the idea that every person has two distinct sides—one that ostensibly serves as a mask to conceal the true self from the world at large, and that more authentic self buried beneath a veneer out of fear, obligation, deceit. It is a film that asks what happens when one embraces that true self beneath the mask and finds the courage to wear it in the stark light of day, an allegory that deals with the ramifications of that decision at personal, interpersonal, and societal levels.

Hahahaha no, no, just kidding.

Roger Corman’s Death Race 2050 is a goofy and gruesome 90-minute melee chock full of absurd cars, impractical special effects, and a surprising amount of  charm. It’s a film that only asks you turn your brain to low-power mode instead of all the way off, making for a viewing experience perfectly tailored for a go-nowhere Friday night on the couch with a couple of friends and cases of beer. 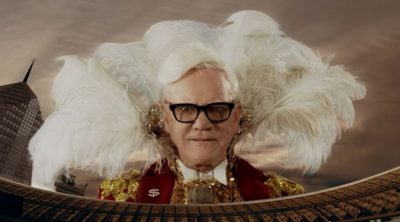 In post-apocalyptic 2050, the United Corporations of America is a sprawl of squalor and decay thanks to a 99.93% unemployment rate. The other .07% of Americans are megalomaniacal, unsympathetic pricks who keep society pacified with virtual reality. The cornerstone of the UCA’s success is the Death Race, an annual cross-country endurance race that awards drivers points for killing pedestrians.

The participants of Death Race 2050 involve five cars, each more audacious than the last. 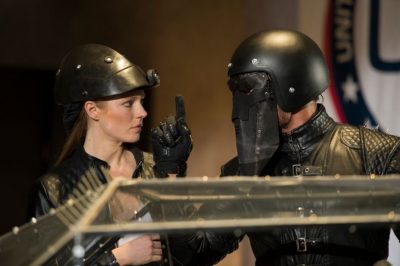 Frankenstein’s copilot and proxy, Annie Sullivan (Marci Miller), is secretly a double agent working with The Resistance, an underground network of rebels bent on overthrowing the corrupt government and liberating the people. Annie’s mission: to kill the spectacle’s greatest champion and disrupt the race.

Even worse? Now, The Chairman (Malcom McDowell) is out to replace Frankenstein as the UCA’s foremost hero because he had the temerity to insult his hair. (A thin-skinned fascist with a bad hairdo and an easily-wounded ego, you say? Why does that sound familiar?)

Behind the Wheel: Get an inside look at the making of the cars of Death Race 2050 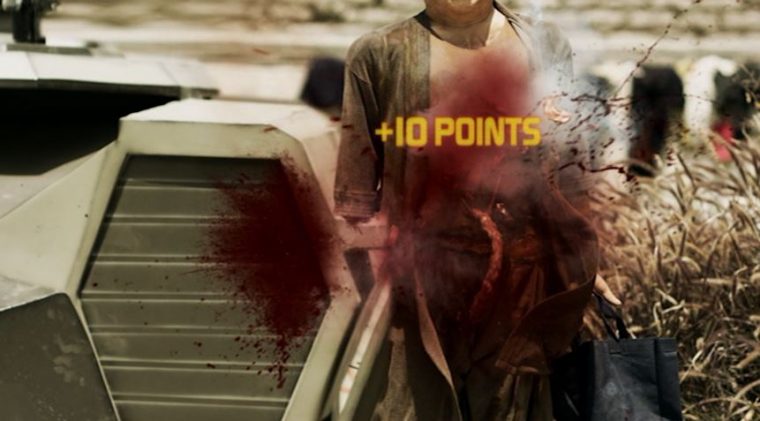 Points are scored by mowing down pedestrians

Let’s dispense with the obvious here: if you have never seen Death Race 2000, or are not a fan of schlock/cult cinema in general, there is a significant chance that you will not like this movie whatsoever. If you’re firing up Death Race 2050 expecting to get a Fellini or Antonioni film with murder cars, then you are going to be sorely disappointed, and you also have exceptionally strange expectations. 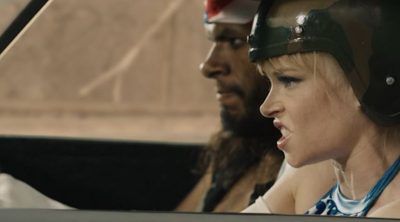 Make no mistake: Roger Corman’s Death Race 2050 is in many ways a crass, dumb, loud, messy, uneven, grotesque, schlocky, and tawdry film. At the same time, it is pretty much everything you can and should expect from a film entitled Roger Corman’s Death Race 2050. If you know what to expect walking into it, you’ll probably have a good time watching.

Its approach of planting tongue firmly in cheek is of great benefit to the film, particularly in that it makes its ultra-low-budget look all the more forgivable. Contrasted with the 42-year-old Death Race 2000, Death Race 2050 looks incredibly artificial due to its reliance on green screen backdrops and digital gore effects, all of which could be charitably described as unconvincing. While its quick-cut editing style does help cover some of those budgetary limitations, the cheapness of the computer-generated special effects is abundantly clear throughout the film. 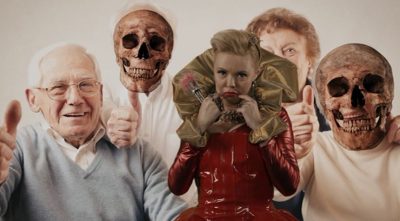 But, weirdly, the artificiality kind of works. Sure, there are some effects shots that will make you chuckle because of how goofy they look, but because the film embraces the unreality of it all, they are never enough to rip the viewer out of the film.

Where the quick-editing and use of CG effects created the impression of being somewhat shortchanged in terms of gore, the same can be said even more so for the actual driving. The racing sequences feel quite chopped up, so much so that the actual stunt driving work feels hampered by the film’s refusal to stick with a shot for more than a couple of seconds. Where the actual driving is given room to breathe, it’s a lot of fun, and so it seems disappointing that there wasn’t more done to capitalize.

Speaking of the cars, they are pretty much what you would expect: essentially giant Hot Wheels with guns and missiles fore and aft. Given that they were built almost entirely from packing Styrofoam, they’re quite impressive to behold. FX Director Fernando Vasquez did some marvelous work putting these things together, aided in no small part by Corman’s expertise stemming from designing the cars in Death Race 2000.

A Ridiculous Retrospective: Look back on the Death Race franchise and how it’s evolved 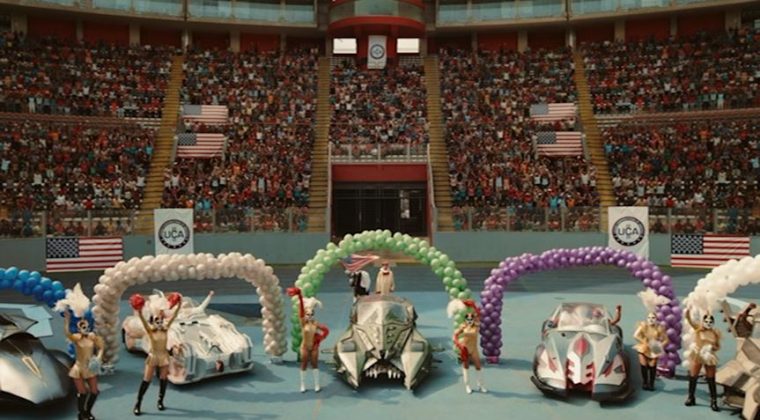 Despite the incongruity with reality, Death Race 2050 makes a point to tackle several very real social issues. There’s the reliance on technology and artificial intelligence, wealth disparity and class warfare, religious extremism and celebrity worship, commercialism, and global warming among others. These subjects are addressed with a level of subtlety one can reasonably expect from a film ostensibly built around people being run over by cars for points, but it never feels groan-inducingly heavy-handed, nor does it feel like some grafted-on appendage. 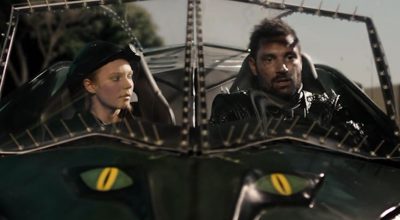 Embracing the film school kid within, there’s even an interesting motif of duality that runs through the film. There are ideas at work with the characters of Minerva and Jed Perfectus that play with the idea of living up to societal stereotypes—the former speaks “ghetto” when on camera and quotes Blaise Pascal in private company, and the latter has an internal struggle with the concepts of masculinity, sexuality, and gender identity.

But for the sense of awareness about social issues—one scene that stood out in particular saw two female characters having a conversation at an establishment called, I sh*t ye not, Bechtel’s Bar—it seems clear enough that the film has its heart in the right place even if the execution doesn’t always bear out the message. 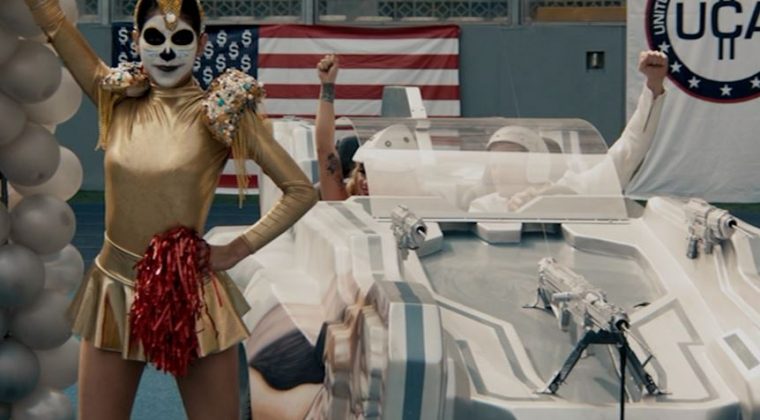 Ultimately, the appeal of Roger Corman’s Death Race 2050 is tied with what it says on the tin. The on-the-road portions of the film see plenty of people mowed down—including more than a few instances of fans willingly sacrificing themselves to help their favorite drivers earn much-needed points—and there are plenty of fake limbs and intestines tossed around. Well, I say plenty. 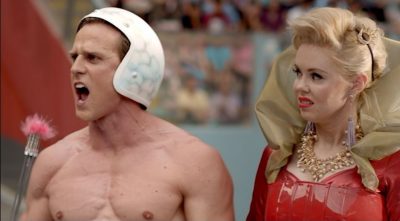 Jed Perfectus (Burt Grinstead) doesn’t like having his masculinity questioned

To put Death Race 2050 on the same level as other soulless, low-budget, straight-to-video action films though would be a disservice to the effort made to permeate the film with personality and a surprisingly prescient intelligence. Even if a great deal of its charm and satiric tone is derivative of (and, ultimately, inferior to) the original, and even if the material borrows liberally from influences ranging from The Hunger Games, Idiocracy, and Wacky Racers, there is something enchanting about the decision to embrace all things goofy and gross in lieu of taking itself seriously and following the well-trod track of “grim and gritty” reboots.

For as much as I could attempt to offer critiques about tonal shifts, pacing problems, uninspired acting, creaky writing, and so on, these are perhaps critiques better leveled against films, say, not named Death Race 2050. The thing that did stick out to me more than anything else was how much it seems to pull back on the gore, particularly in terms of practical effects. There were a few instances in the movie of practical gore effects that worked just fine, and given the lack of concern over realism, it seems a shame that there wasn’t more done to play up the insanity of the premise more with buckets of Karo syrup blood.

Roger Corman’s Death Race 2050 doesn’t feel like a movie that sets out with the intent of trying to one-up the original or its cult status, which is probably wise in that it does not meet that echelon. It feels, for all the world, like a fun little project meant solely to entertain; in that sense, it’s quite successful. While it feels like the film could have made strides to be even more ridiculous, the end result is a goofy, light, and amusing movie that will hold your attention span for 90 minutes and give you enough to chuckle at.

Roger Corman’s Death Race 2050 is available through Amazon.com and other online retailers.