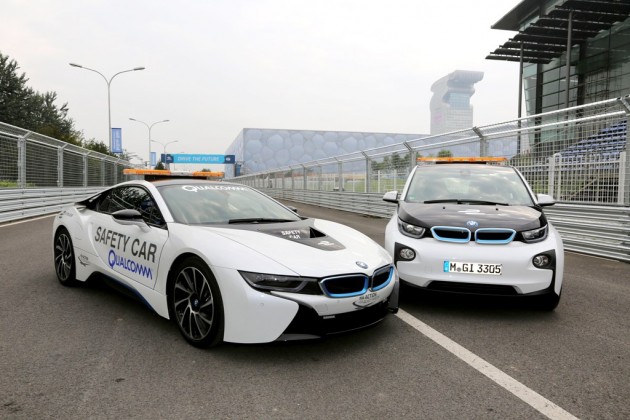 If you’re not pumped about FIA Formula E Championship yet, let me explain why it’s a big deal.

Intended to generate buzz about new electric cars, the FIA Formula E Championship will function as the counterpart to the Formula 1 series but will feature single-seat, electric race cars. The global event will take place in multiple cities around the world between now and June 2015, including Malaysia, Buenos Aires, Miami, Long Beach, Monte Carlo, Berlin, and London.

And BMW is the official vehicle partner.

This past weekend, the first race for 10 teams took place in Beijing around Olympic Stadium, and it featured a modified BMW i8 hybrid as its safety car, which can be seen in action below.

The BMW i8 claims to be the “sports car of the future,” and what better way to prove that statement than leading the FIA Formula E Championship?

The BMW i8 Safety Car underwent multiple modifications to make it fit for the race track: a full roll cage, unique communications systems, racing buckets with harnesses, and on-board extinguishers.

The low-emission hybrid has a lightweight carbon/aluminum body and features a top performance of 362 hp with 420 lb-ft of torque. Even better, it can accelerate from zero to 62 mph in just 4.4 seconds, and 50 to 75 mph in 2.6 seconds.

Don’t forget about the two fully-electric BMW i3s which are the medical and extraction cars! 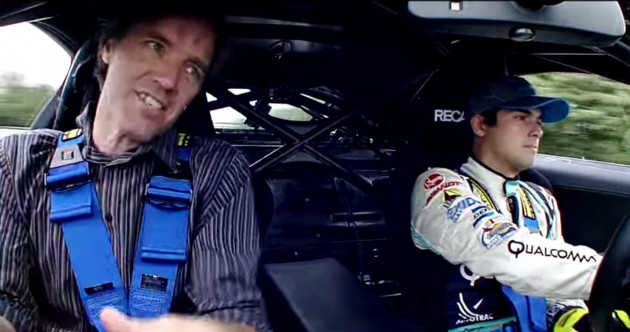 One of the key features of the BMW i8 safety car has been provided by Qualcomm Inc, a global semiconductor company that produces wireless telecommunication products.

The car features wireless Halo electrical charging technology from Qualcomm, so it can be swiftly deployed onto the track without unplugging from charging.

See Qualcomm engineers explain the technology for yourself in the video below, as they’re driven around in a BMW i8 safety car by Formula E driver Nelson Piquet Jr.