As fascinating and treasured as classic cars are, an aspect of automotive history which often goes overlooked is the way those vehicles were marketed. Advertising in any industry offers insight into what people valued at the time and how companies reached them. That goes for the automotive industry too.

Take a look at the early history of the American muscle car, for instance. For years, automakers invested floods of money into finding ways to win customers over their competitors. That’s what the new book from CarTech publishing is about: Selling the American Muscle Car.

JD Power Quality Study: How do Chrysler and Jeep stack up against their competition?

Learn About Muscle Car History in This Upcoming CarTech Book 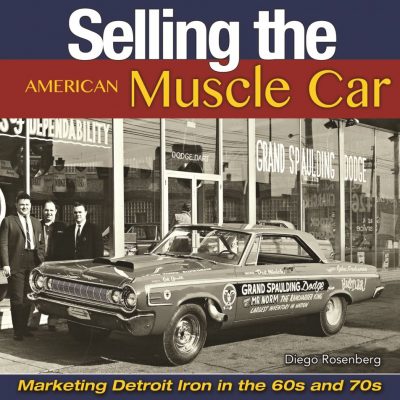 This 192-page study on the efforts of automakers to promote their performance vehicles promises to be a fascinating exploration of the culture and values of the 1960s and ’70s. The rivalry between automakers like Ford, GM, and Chrysler is documented in 11 chapters, each focusing on a different OEM’s exploits. The pages are filled with images taken from print ads, promotional media, speedway races, and personal photos of cars.

The author, Diego Rosenberg, has lived the muscle car culture his whole life, visiting racetracks and working on old cars when he was young. As an expert in the field and regular contributor to Hot Rod magazine, Rosenberg shares his first-hand knowledge of what made each model appealing and its impact on consumers.

While I’ve not had the chance to read the entire book, Selling the America Muscle Car looks like it will be chock-full of details about every muscle car from the era, based on the previews. If you love muscle cars and are interested in how the rivalry between brands led to the cars we now see at cruise-ins, keep an eye out for this book when it’s released in October.