Broadway Hits The Road With James Corden and Carpool Karaoke 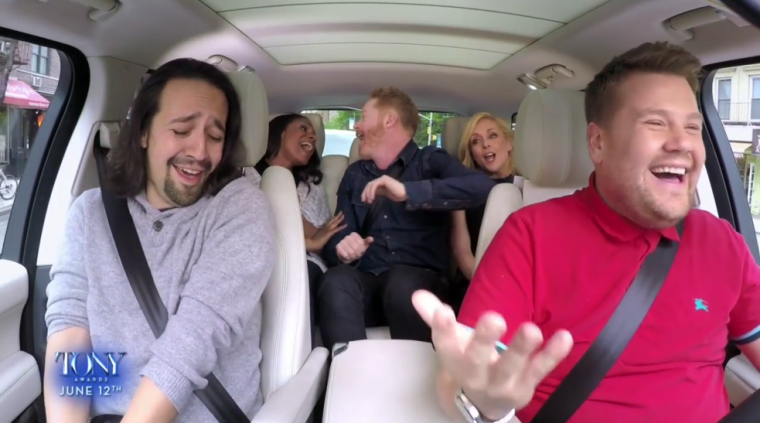 This is my most favorite Carpool Karaoke screencap EVER

The Tony Awards are coming up this Sunday, and a new episode of The Late Late Show’s Carpool Karaoke has been released in celebration. Host James Corden has arrived in New York City to prepare for his duties at the helm of Broadway’s biggest night, and he needs help learning how to navigate New York City’s very confusing block system and traffic. Who better to ask than the biggest stars on Broadway today? 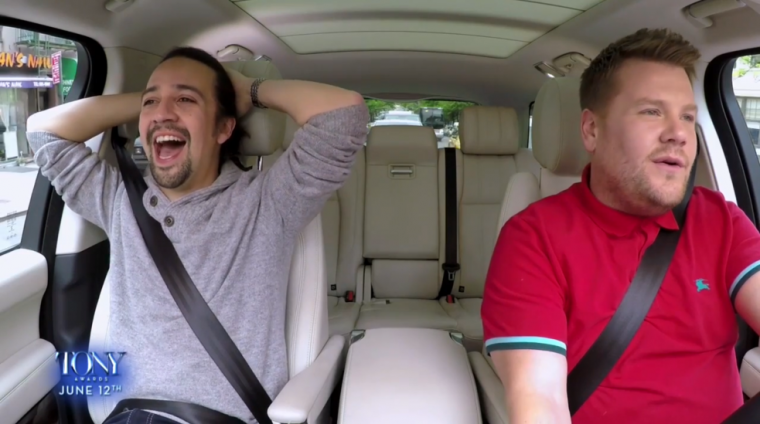 The segment opens in the Upper West Side, with Corden behind the wheel of his SUV and Lin-Manuel Miranda in the passenger seat. Miranda actually asked to be on Carpool Karaoke back in February, and Twitter users everywhere will be glad to see that everything finally came together.

“@Lin_Manuel: Get outta my dreams…and into your car (pool karaoke please)
https://t.co/qpFOGUW3Uk” YES! For sure!!!!

If you don’t know who Miranda is, I’ll forgive you for closing this article to go immerse yourself in the multitude of videos and posts about one of Broadway’s current bright stars. Lin-Manuel Miranda is the MacArthur Grant genius behind the rap musical Hamilton, which has a record-breaking 16 nominations heading into the Tony Awards. The musical has the rare distinction of being honored with a Pulitzer Prize, and focuses on the life and work of America’s first Treasury Secretary, Alexander Hamilton. I challenge you to go out and find the chart-topping soundtrack, give it a good listen, and not leave the experience changed. You might laugh at the premise, but the story of America then told by America now is an addictive, emotional, and educational look at the life of one of our forgotten founding fathers.

Posted by Hamilton: An American Musical on Thursday, February 18, 2016 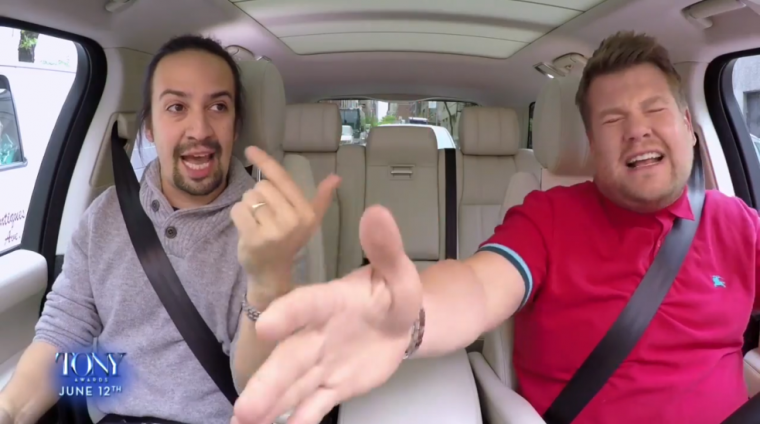 In the car, Corden cues up the music, and of course it’s the Hamilton soundtrack. They breeze through the most iconic part of the opening, with Lin-Manuel Miranda saying his own name when asked “What’s your name, man?” From there, the duo makes it to “Guns and Ships,” which features one of the show’s most difficult rap sections by America’s French ally, the Marquis de Lafayette (played by Daveed Diggs in the show). Corden breezes through the twisting words, and Miranda seems suitably impressed. It’s no surprise that this portion of the video went well, as Miranda regularly participates in car sing-alongs when driving in the car with his father.

The Biebs Is Back: Check out Justin Bieber sing along with James Corden during another edition of Carpool Karaoke

When cruising around the Big Apple, Corden comes across Broadway legend Audra McDonald (currently in Shuffle Along), Jesse Tyler Ferguson (starring in Fully Committed), and Jane Krakowski (receiving praise for her role in She Loves Me). The trio hops in to Corden’s Land Rover and they continue driving. When Corden turns on the radio again, the opening chords of Rent’s “Seasons of Love’ fill the cabin, and everyone has the appropriate theater fan reaction (awww), and breaks into song. They also sing “Can’t Take My Eyes Off Of You” from Jersey Boys. On a singing break, the stars share with James Corden what they are feeling about the upcoming Tony broadcast and tips for his first time hosting the show (after winning a Tony himself in 2012). 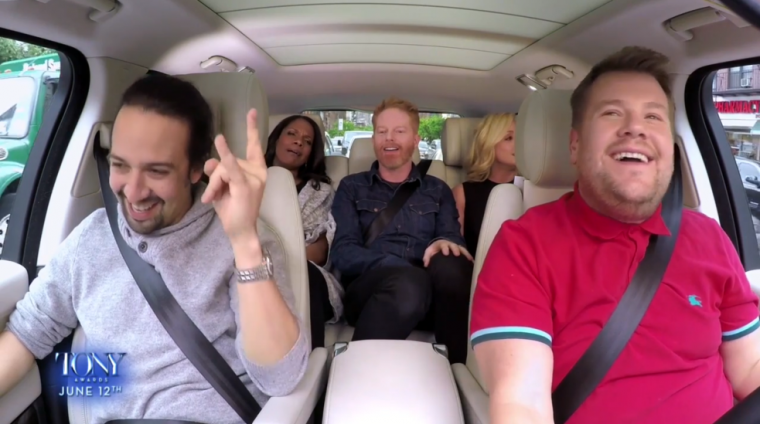 The car ride is fun to be sure, but as with all good things it must come to an end. In true Broadway fashion, the finale of the segment is a bombastic rendition of “One Day More” from the infamous Les Miserables. Miranda took the role of Valjean, with Ferguson and McDonald playing the parts of lovers Marius and Cosette. Poor Krakowski was cast as Eponine, and was correctly ignored by Ferguson next to her. 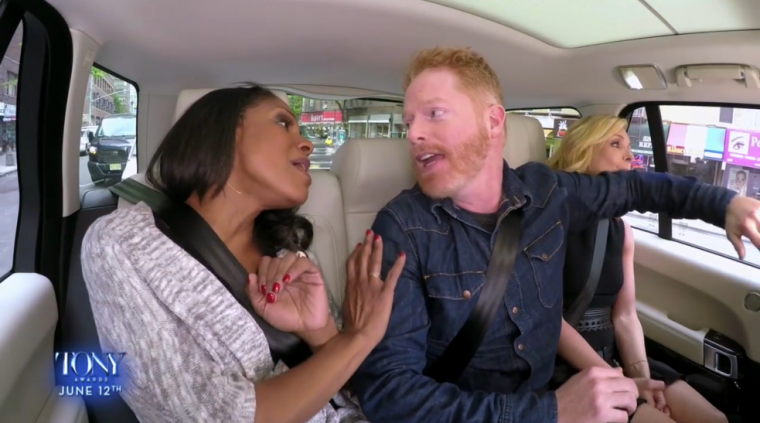 A different type of back seat love story

Corden belted out the part of Enjolras, with great style, and the whole number reached a crescendo with everyone sharing the final roles of Javert and the chorus. Finally, a fantastic closing note from Ms. McDonald wrapped up what was, by far, the best episode of Carpool Karaoke ever. The only thing missing that I would have loved to see was the minor bickering that must have taken place to decide who sung what part in the Les Mis finale, because we all know it happened (everyone wants to be Valjean). 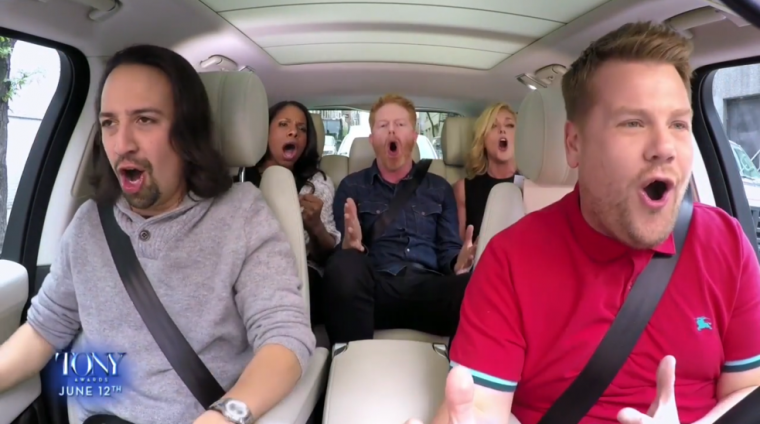 Can You Feel the Karaoke Tonight? Sir Elton John gets the Carpool Karaoke treatment

Anyone who knows me can attest to my extreme love of Broadway that has been with me since I heard my first Rodgers and Hammerstein soundtrack. Thank you, James Corden, for letting me geek out about cars and theater at the same time. I think this calls for a sing-along in my car on my evening commute (apologies to the other drivers in Ohio).

Take a look at this epic installment of Carpool Karaoke for yourself: