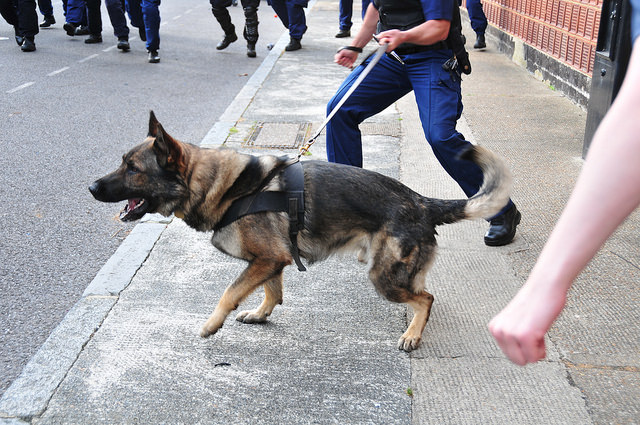 Hello there, thief. Say hello to my teeth.

When a San Diego police dog takes a bite out of crime, hope on the streets is restored.

A thief in California thought he got away with stealing a car from a Roland Park used car dealership, but then the pain set in.

The man was spotted pulling out of the car lot when local police arrived at the scene early Sunday morning. After a brief chase, the suspect crashed into an embankment and fled into a nearby home.

While the crook tried to play hide and seek from officers, the dog played fetch instead, assisting the police in the arrest. The man was then treated for a bite wound before being thrown in the slammer.

The burglary happened at about 2:10 a.m. at Cash for Cars on University Avenue. Multiple thieves were involved as three other vehicles were initially missing from the car lot. Police were able to find two of the vehicles left on a street not far from the store and deliver them back to the dealer.

Discover: New Year’s Eve Traditions from Around the World

Detectives are still looking for the other suspects and missing car. Hopefully they enlist the help of that dog because that canine against crime is fast and furious.

While this is not an episode of “Scooby Doo, Where Are You,” we are sure the criminal caught is behind bars groaning, “I would have gotten away with it, too, had it not been for that meddling dog.”

Give that dog a Scooby snack. He has more than earned it.