Can’t Beat Traffic? Why Not Build a Giant, Street-Straddling Bus and Go Over It?

Ah, traffic, the daily struggle of everybody in location A picking up and rushing to location B, while simultaneously everyone in location B rushes to location A. And, when both locations happen to be in China, largest car market on the planet and site of some of the worst traffic on the planet, that problem is multiplied by a thousandfold.

So, figured the Transit Elevated Bus Technology Development Company, why not just build a giant, highway-straddling monster bus from which to look down on the poor, sad commuters trapped in their gridlocked cars below?

The Transit Elevated Bus (TEB) is an electric transportation concept that would straddle the highway over two lanes, transporting passengers in its upper deck while allowing cars to pass under its double-decker carriages. In all, each bus would be estimated to be able to carry between 1,200 to 1,400 people, using an elevator to get on and off at stops along the route. 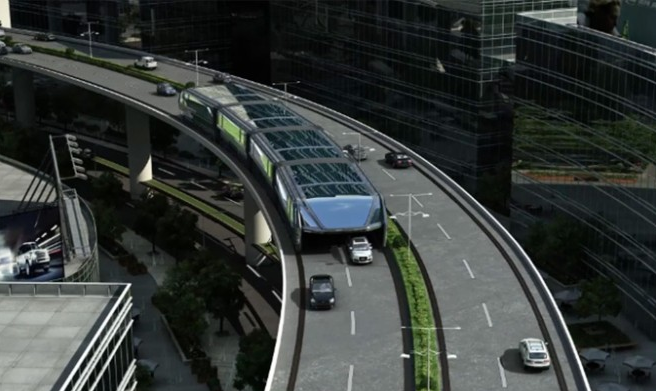 The concept, which was revealed at the 19th China Beijing International High-Tech exposition earlier this month has been touted by the developing company as faster and cheaper to build than a subway system would be, and has come up with plans to trial the concept in Qinhuangdao, a city in Hebei province.

This is still a fair way from production-ready, as some are expressing safety concerns in the case of traffic collisions due to its current design or more challenging road infrastructure than a two-land highway. However, if this system comes into use, it would certainly be a unique and interesting solution to traffic congestion.

Ready for a Trip? Use these tips for the perfect road trip