Cardiff Company Faces Blow-Back After ‘Ride Me All Day’ Campaign 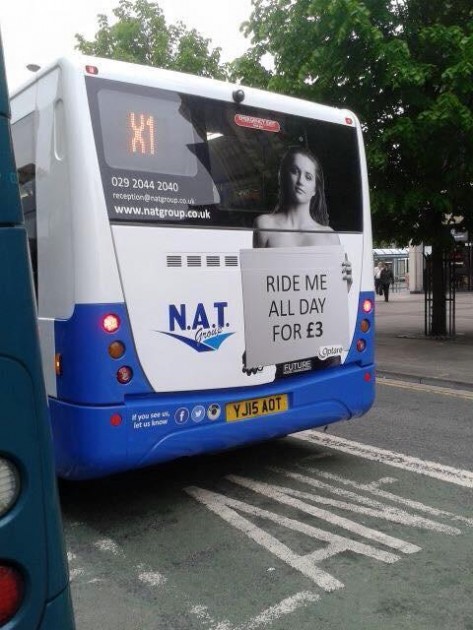 What’s the best way to draw attention to and promote your fast, easy, and affordable city buses? Would it be playing up the positive aspects of public transportation, or perhaps shattering unfounded stigma about the perceived socioeconomic standing of those who rely on buses? Would it involve a smart campaign that makes bus-riding seem more appealing and more convenient?

If you said yes to any of the above bits, then you were clearly not a member of the think tank behind New Adventure Travel’s inexplicable “Ride Me All Day for £3” campaign. Rather than actually try to promote…you know, actual things having to do with riding the bus…the Cardiff-based company opted to use the tried and true method of just using good ol’ fashioned sex.

Dear @NAT_Group, I find your new promotion in Cardiff hugely uncomfortable, not to mention objectifying… pic.twitter.com/OPipr7Ovea

Needless to say, it did not go over well. NAT’s buses were plastered with large black-and-white images of shirtless men and women holding up signs that read “ride me all day for £3.” Apart from the sheer lunacy of using sex to sell public transport, the implied parallels to prostitution were more than a little troubling for some, including We Are Cardiff’s Hana Johnson. “I got stuck behind one of these buses in Canton at 8:45 this morning. With our following of 30,000 people, we try not to use We Are Cardiff to express opinions, but I felt like we had an obligation to the women and men of Cardiff to call this company out on the commodification of a woman’s body, and the trivialization of prostitution,” Johnson told The Guardian. “I guess you could use the ‘it’s just a laugh’ argument, but in 2015 does a bus journey really need to be sexualized to market itself?”

Don’t worry men, your bodies aren’t immune from the sexualisation of @NAT_group either! Terrible marketing. pic.twitter.com/24KHF6LcIz — Vicky Chandler (@VickyChandler) May 11, 2015

In their defense, NAT used the ‘it’s just a laugh’ argument, apologizing for any offense taken and promising to remove the advertisements within 24 hours.