Careless Motorcyclist Crashes While Lane Splitting – Or DOES He? [VIDEO] 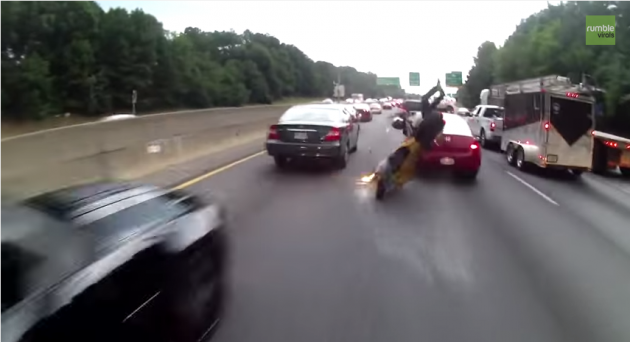 Last week, we shared a country-fried video of a Jeep CJ5 jump and roll that left the driver miraculously unharmed. Today we present another bit of YouTube gold that looks like it should have netted the driver a Darwin Award, but instead left him with only a broken wrist (and probably a lot of bills, of both the medical and mechanical variety).

Related info: The Futuristic and Unique Ride of the Honda Accord Hybrid

“But wait, just one more thing,” the automotive detectives at CarScoops say, doing their best Columbo impression. They argue that although the biker was admittedly lane splitting; at the time of the accident, he was located firmly within his lane, and it was the red Honda Accord that cut him off.

It’s an interesting theory, so we took another look at the video ourselves. And then another, and another, and another. Seriously, we subjected this 30-second clip to the level of scrutiny normally reserved only for wardrobe malfunctions and Zapruder films.

Related info: Honda Accord is America’s Most Popular Car

So what’s our opinion? There is no frame-up being committed here; the motorcyclist was and is guilty. If you watch closely, both he and the Honda Accord merge into their lane at the exact same time. It doesn’t appear that either driver is using turn signals, and in such a scenario, the blame should fall on the vehicle that is driving at a reckless speed which prohibits him from slowing down or adjusting once he realizes the other driver is making the same move. Case closed.

If you feel differently, let us know in the comments. Or just join the already raging debate that’s going on in the YouTube comments section.