Whether you’re a Taylor Swift fan or not, you can’t deny the announcement of her new album, “Reputation,” has dominated the Internet over the last week. With several hidden videos on her YouTube VEVO page, it’s likely she’s hiding a new music video somewhere in there. While we wait for her new release, we decided to dive into Taylor Swift’s past—her past music videos, that is—and check out some of the vehicles featured throughout her career, both in country and pop music, in chronological order of appearance. 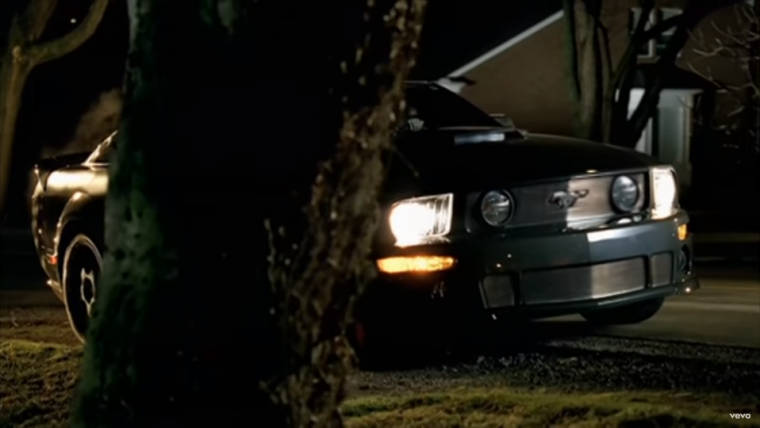 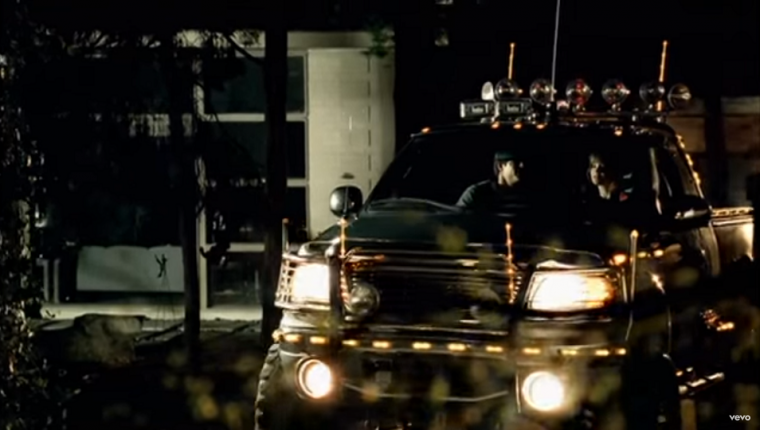 One of Taylor’s first music videos was for her song “Picture to Burn.” The video features two vehicles: a 2005 Ford Mustang, occupied by Taylor and her best friend Abigail, and the decked-out 1999 Ford F-150 that her ex-boyfriend “never let her drive.” For those unfamiliar with this particular song, the hook lyric in the chorus is, “I hate that stupid old pickup truck you never let me drive,” so there was definitely a focus at the beginning of the video on the pickup. This video obviously pays tribute to Ford, featuring two of their best-selling models. 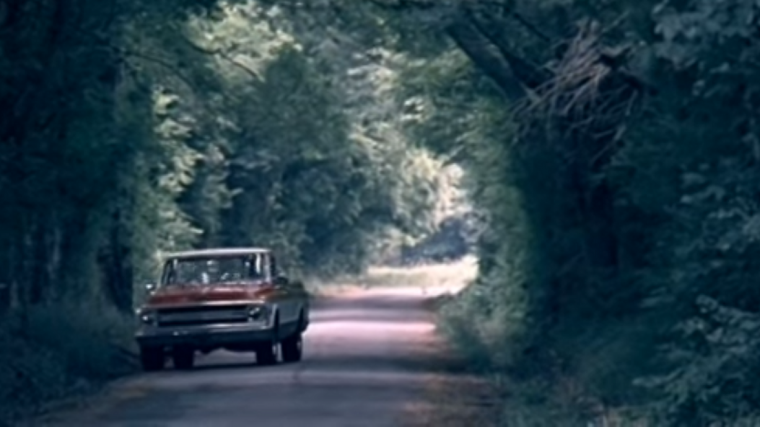 Once again referencing a pickup truck in her lyrics, “Tim McGraw” is an emotional ballad about one of Taylor’s past relationships. In the song, Taylor describes her lost summer love as “just a boy in a Chevy truck that had a tendency of getting stuck on back roads at night.” The video shows her ex driving down the road in his truck, listening to Taylor’s song on the radio and coming to the realization that the song is about him. The pickup featured in the music video appears to be a white and orange 1970 Chevrolet CST-10, a model no longer produced by the American auto brand. It’s understandable that this car would break down often due to its age, making the authenticity throughout the video pretty spot-on. 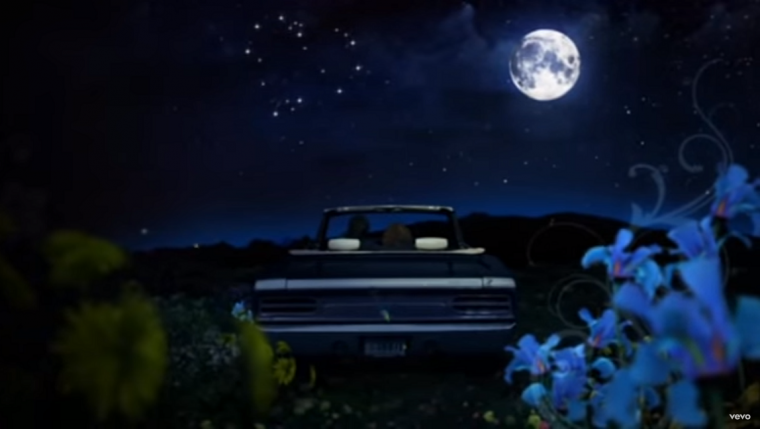 A song about coming-of-age and the struggles of high school, “Fifteen” has a unique style to its music video. Rather than being filmed in a real-life school, the video was created with a lot of digital and motion graphics for a whimsical feel. In the second verse, Taylor describes a young, fifteen-year-old girl going on her first date, swooning because the guy taking her out has a car. The video shows Taylor’s best friend Abigail’s struggle with heartbreak after a boy rejected her. The music video shows Abigail and the boy together in what seems to be a 1970 Plymouth Road Runner Convertible. This old-school vehicle adds to the rustic and country appeal of the song. 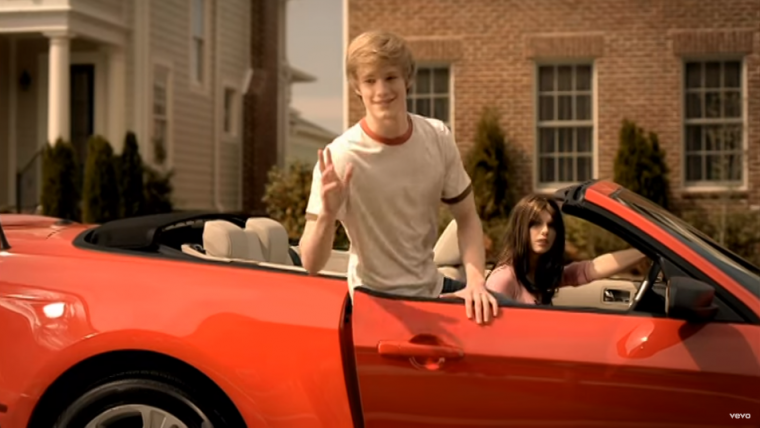 “You Belong With Me“

One of Taylor’s biggest country hits, “You Belong With Me” tells the story of a small-town, average girl as she sees someone she loves with the wrong person; “she wears short skirts, I wear T-shirts,” the lyrics read. Taylor plays both the main character in the video as well as her love interest’s not-so-nice girlfriend (i.e. Brunette Taylor). When Taylor and her love interest are talking on a bench, Brunette Taylor pulls up in a bright red 2010 Ford Mustang Convertible. This just adds to the high-class appeal of Brunette Taylor, crushing Taylor’s hopes of being with the boy she loves; but don’t worry, the video does have a happy ending. 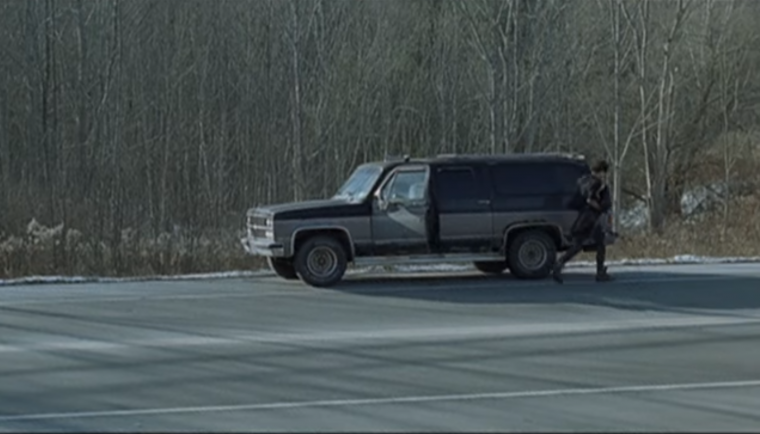 Taylor is often criticized for her songs about her ex-boyfriends, but “Back to December” is different. This song is essentially an apology letter to one of her exes. The video shows both Taylor and her ex-boyfriend in parallel story lines. Taylor is writing her letter, while the ex-boyfriend is driving around in his 1988 Chevrolet Suburban. Eventually, the man gets out of the car and begins walking down the snow-covered road, giving the audience a full view of the Suburban. This song is said to be about Twilight actor Taylor Lautner. 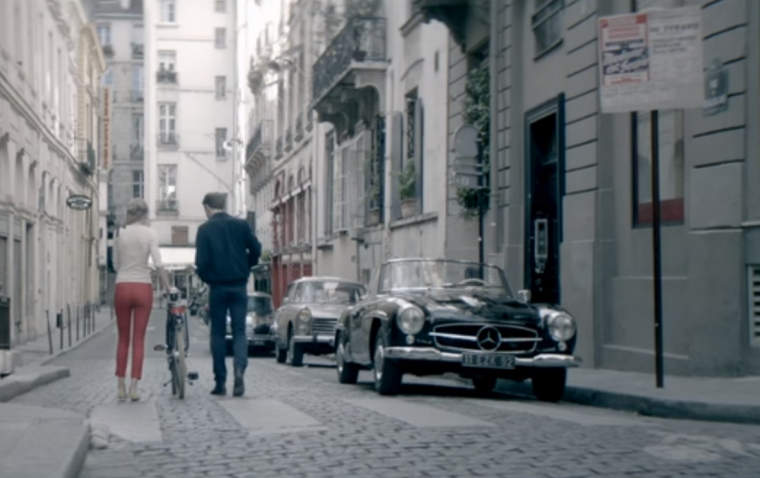 One of Taylor’s more recent songs, “Begin Again,” tells the story of a woman who has given up on the idea of love, but then finds it again in a coffee shop. She meets a man in the coffee shop and suddenly begins to let go of her past relationship, living in the moment. At the end of the song, the man walks Taylor to her car; in the music video, they stroll down a cobblestone street, where a beautiful Mercedes is parked on the side of the road. While it’s not 100% certain what the car model is, it appears to be a late 1950s Mercedes-Benz 190 SL Convertible. The vintage Mercedes adds to the old-school, European vibe Taylor seems to be going for throughout the video. 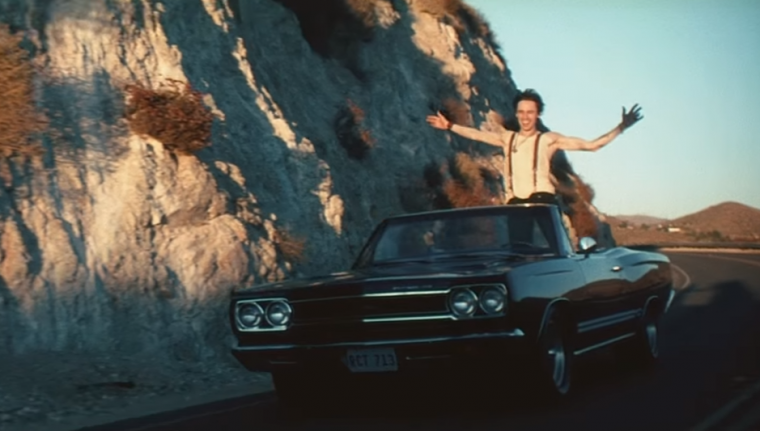 “I Knew You Were Trouble“

In her song, “I Knew You Were Trouble,” Taylor describes one of her exes as the kind of guy people always warn you about. But she didn’t listen; “shame on me,” the lyrics say. In the music video, Taylor’s bad-boy love interest can be seen standing on the driver’s seat of a 1968 Plymouth GTX as it cruises along the side of a mountain, as Taylor sits in the passenger’s seat. The two seem to be having an incredible time, as risky as their behavior might be. But that’s sort of the point of the song, isn’t it? Making bad decisions may be fun in the moment, but they can have painful consequences. 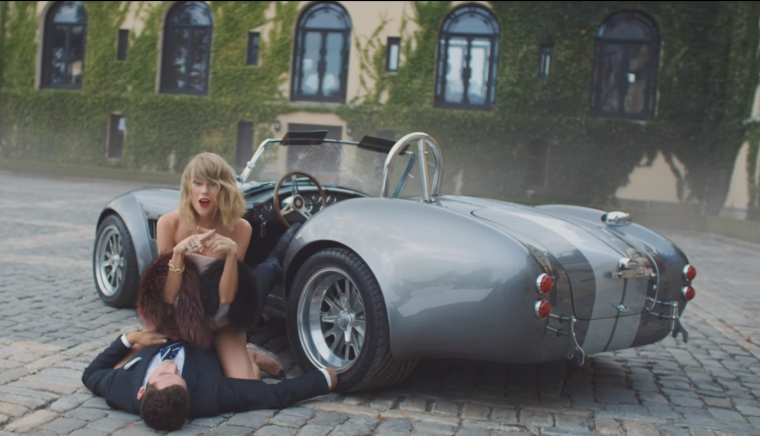 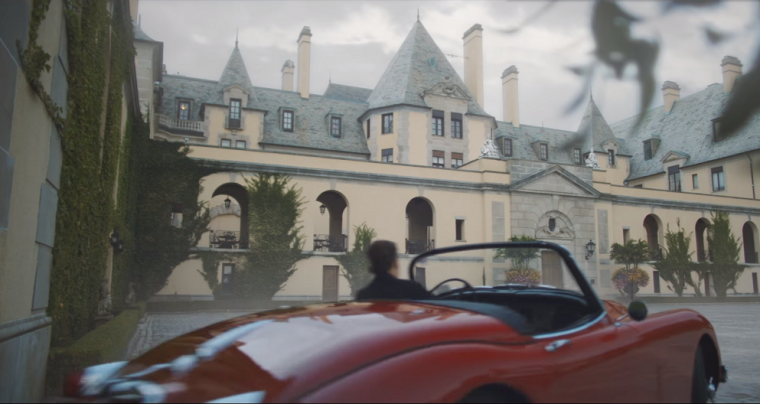 Taylor seems to love including classic cars in her music videos, and in “Blank Space,” she also loves destroying them. The music video for “Blank Space” features two vintage vehicles, the most prominent being a silver Shelby AC Cobra. However, the Cobra featured in this music video is a replica built in 2008. And, before you freak out when Taylor takes a golf club to its hood, you should know that the damage to the Cobra was done through CGI. She did not actually smash the vehicle (thankfully). However, according to the replica’s owner, Taylor did accidentally scratch the hood of the vehicle with her nails; but the production paid more than $3,000 to repaint the entire vehicle.

The second vintage car in “Blank Space” was only featured briefly; it was the vehicle of her seemingly next love interest for the video. He drove a cherry red 1957 Jaguar XK 150 convertible (she also seems to love convertibles) onto the lot at the end of the video. This video was massively popular, reaching more than 2 billion views on YouTube. 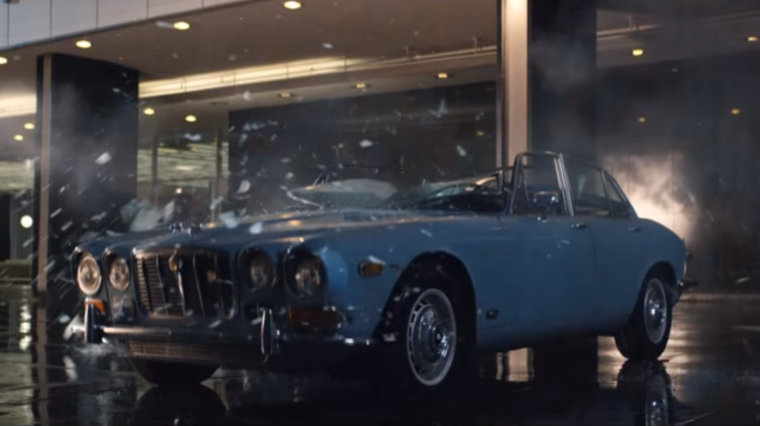 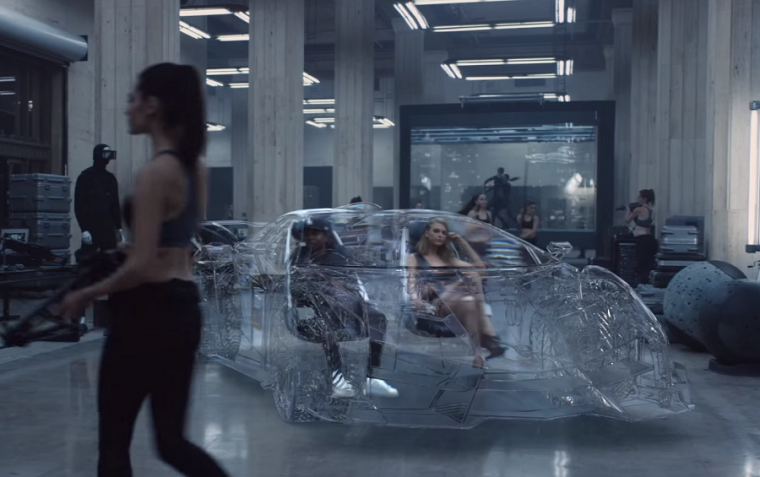 As the introduction to Taylor Swift’s infamous “squad goals,” her music video for “Bad Blood” features two vehicles in particular. The first appears as the first line of the song plays; Taylor Swift’s character is thrown out of a window (by Selena Gomez‘s character), falling several stories down and landing on top of a blue Jaguar XJ6 Series 1. While sprawled out on top of the crushed Jaguar, the pop singer delivers the first lyric and dives into the song.

The second vehicle is actually a transparent silhouette; however, the silhouette is outlining a 2013 Lamborghini Veneno. Taylor Swift, actress Cara Delevingne (pictured above), and several others are seen sitting inside the vehicle throughout the video. 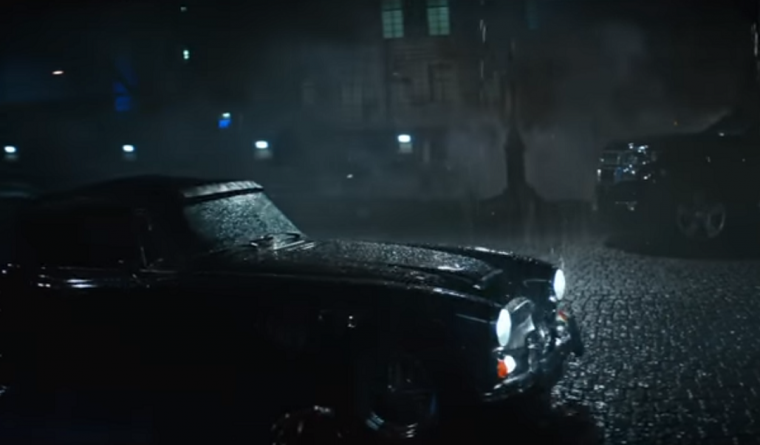 The world went a little wild when Taylor Swift and Zayn Malik of One Direction paired up to create a song for the “Fifty Shades of Grey” film series. Together, they surprised the world with the hit song “I Don’t Wanna Live Forever.” In the music video, we can see Zayn pull up in a black 1996 HMC MK IV as the rain pours, giving the video’s overall aesthetic an even darker shade of grey. But don’t worry, there was someone there to hold Zayn’s umbrella for him. (Seriously?)