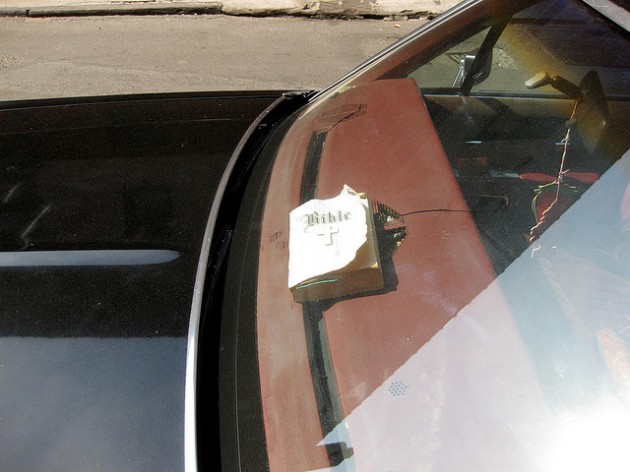 Here’s your daily dose of “is this ridiculousness still happening in the year 2014, seriously”: Joseph Haughey, a former employee of the CarSense dealership in Mount Holly, New Jersey, has filed a civil suit in Camden federal court alleging that he lost his job because of his refusal to participate in religious activities at work.

Haughey was the general manager at the Mount Holly dealership and, by all accounts, considered a model employee who contributed to an increase in the business’ profits. Despite all of this, Haughey was fired on January 15, 2011 for “two instances when he had yelled at employees.” Haughey believes that the real reason for his termination stems from his unwillingness to participate in or lead prayer meetings and keep a copy of the Bible in his office.

From The New Jersey Law Journal:

Haughey says in his complaint that [company president Eugene] Niconovich, [company owner and CEO] McGowan and other general managers kept Bibles on their desks and would spend part of the work day reading the Bible. And on Tuesday nights, Niconovich would lead a Bible study group at the Mount Holly dealership, the suit claims. Employee meetings were routinely opened with a prayer and general managers were expected to take turns saying a prayer to open each management meeting.

Haughey claims that in one meeting McGowan began crying uncontrollably and telling Haughey he “could not wait for that glorious day” when he would die and “spend eternity in heaven with Jesus.” Haughey, stunned, said nothing, which seemed to disturb McGowan. Three weeks after that meeting, Niconovich fired Haughey, the suit claims.

Let’s hope that, if Haughey’s allegations turn out to be true, that the determination is not along the lines of CarSense actually being a person who is entitled to act according to their religious convictions. Sure, it seems asinine, but with the way things have been going, would it really come as all that much of a shock?