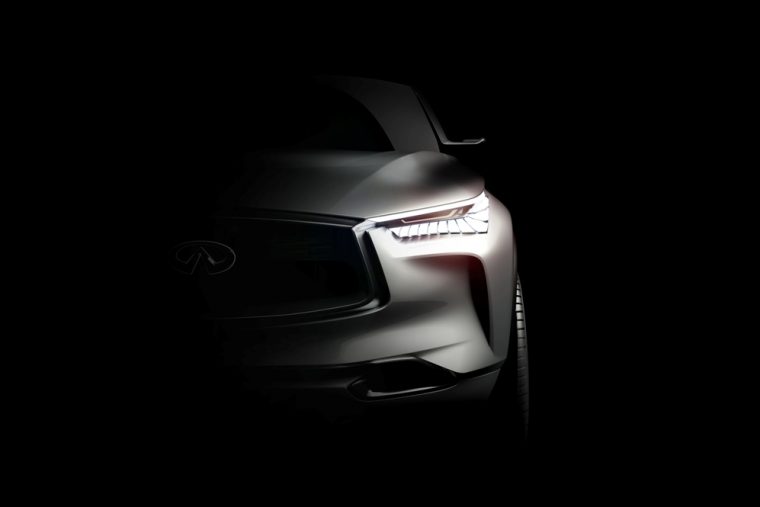 The car market is booming in China, and every car brand is trying to make sure that they grab a slice of the pie. At the end of this month, the Beijing Auto Show will open to the press, and Infiniti will be ready and waiting with a new concept model. The automaker has revealed that the new concept will be called the Infiniti QX Sport Inspiration Concept, and last week revealed a teaser image of the vehicle.

The teaser image is just that, a small taste of what is to come in Infiniti’s “Powerful Elegance” design aesthetic. In the image we can see the front right corner of the vehicle, which shows off the edge of a presumably wide grille. A slim “L” of LED lights creates the headlight, and we can see powerful lines sweeping up over the vehicle’s hood and front nose. In the picture, the car is Infiniti’s favorite shade of silver, but it’s impossible to know if the tease image is in black and white or if this is indeed the color of the concept vehicle. Looking at the image and its shading on the windshield, it also seems as if the teaser isn’t taken from a photograph, but rather from a computer rendering that a designer might use.

Infiniti’s executive design director, Alfonso Albaisa, says “The QX Sport Inspiration expresses a power and purpose that is uniquely Infiniti. With a flowing, natural aesthetic, this concept demonstrates how Infiniti can offer something new and exciting with future QX SUV models.”

Press Days for the Beijing Auto Show begin on April 25th and 26th, so hopefully we will see the full vehicle soon.